On March 29, the Instagram user dickrichter posted an image of a 2010 work by the artist Ryan Sullivan with the comment, “R.S. 2010.” By following up with Dick Richter via email, you could discover that the work was for sale for $120,000.

“Dick Richter Gallery” is a contemporary art gallery working the secondary market solely through an iPhone. It even has a motto: “Here @DR everything is available. We don’t represent artists just a quality of life. Thank you.”

“Its [sic] democracy for the artworld,” “Dick Richter” wrote in an email. He would only speak of his Instagram activities on the condition that we withhold his identity. “Its [sic] an all access pass in a world where some people think you still have to pay to be a vip.”

Even as dealers begin to question the traditional business model of a white-box gallery—with all its overhead costs on top of the continual struggle of midsize businesses against the global enterprises of the wealthiest galleries—Mr. Richter still must maintain a pseudonym. Dealing on Instagram is frowned upon, the equivalent of emailing 300 people and saying you have a Ryan Sullivan for sale and putting it up for grabs. (That’s called burning a painting, a dubious sales practice that’s seen, at best, as tacky.) Five days after Mr. Richter posted the Ryan Sullivan, the L.A.-based collector and adviser Nino Mier commented on the photo, “Rudolf Stingel. Oh wait. No. Knock off artist Ryan Sullivan,” to which Mr. Richter responded, “no opinions here just selling what the people want.” Then the artist and consultant Esteban Schimpf chimed in: “opinions would probably be best.”

An Instagram art dealer was inescapable. With the rise of e-commerce sites like Artsy and Artspace, buying and selling art online has become not only accepted but normal.

“Five years ago, we were all amazed that Jerry Saltz had 5,000 followers on Facebook, which doesn’t seem like a very large number now,” said the dealer Gavin Brown. “Instagram appeals to people on a much more fundamental basis. Photography seems to be taking its proper place as a form of language. You have these emoticons, which are the new hieroglyphics.”

Social media has become a big concern for the art world, and more recently, in the art market. The Art Dealers Association of America has devoted the next installment in its Collectors’ Forum panel discussion series, on May 2 at New York’s Galerie Lelong, to “Social Media and the Arts: The Value of Tweets, Tumbles and ‘Likes.’” As photographs of work proliferate, the legal landscape also must keep up. Organizations like the nonprofit Artists Rights Society are forced to issue numerous takedown notices, according to Adrienne Fields, the associate counsel at ARS. Instagram is now the social media network of choice for the art world, which, Jerry Saltz’s fan base notwithstanding, mostly skipped Facebook and, aside from a few highly active personalities, has avoided Twitter altogether.

Instagram is uniquely suited to the art world because, in the words of Mr. Brown, “Everyone is looking at what everyone else is looking at. I look at the photos, and I look at who’s Liked which of these photos, and you start to realize your fellow members of the hive, what they want to see from you. It’s a kind of averaging effect.”

For dealers, it’s quite possibly the easiest way of selling art—several sources mentioned stirring up interest from collectors accidentally through casually posting images of their back rooms. (Mr. Brown, who prefers to just let the random stream of images “all come at you,” does not use Instagram this way, though he did try to sell a Jeremy Deller print on Tumblr. “It didn’t work,” he said.) Art advisers are scheduling studio visits with undiscovered artists through their Instagram accounts. Collectors, too, create de facto advertisements for themselves by showing people what they have. Alberto Mugrabi recently posted a painting that he owns from Warhol’s Marilyn Monroe series with the comment, “It can be your for the price is right at Philips May auction” [sic], sounding a bit like a billionaire Bob Barker working over a naive game-show contestant.

For now, though, most of the art world is reticent about playing the market in this way. It’s not unlike the Facebook account of a college freshman—it’s fine to be caught in the act of being cool, but no one should have a sense that you’re actually working at it. 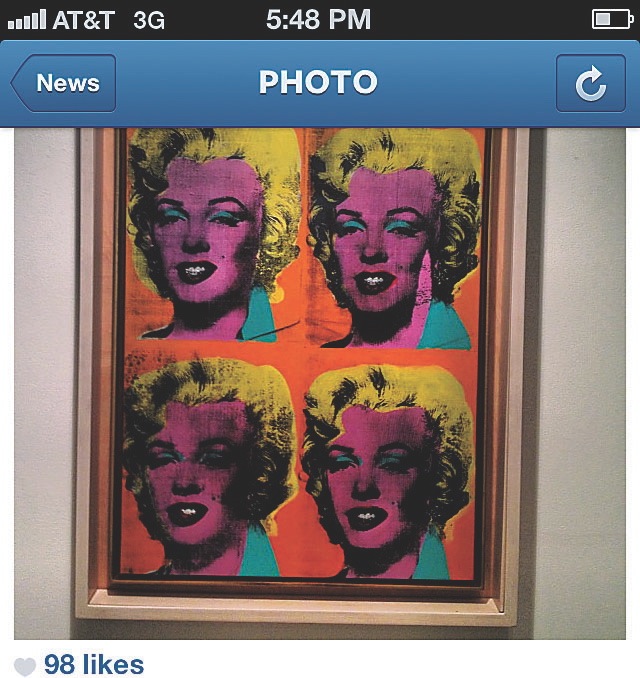