A Jersey City insider sat on his stool at the bar and stared into nothingness and reflected on the Jersey City mayor’s race, one he said he couldn’t call until a passerby asked him to go gun to his head.

If challenger Steve Fulop has 18,000 targeted voters and gets them to the polls, he wins the election.

“Game over,” said the source, who has intimate ties to city hall and a history of working in local government.

But the insider wasn’t convinced Fulop has properly messaged his campaign to inspire a majority of supporters, arguing that the wetsuit and fins ad the challenger used to launch his mayoral campaign framed him as a narcissistic loner.

He also panned Fulop going negative in a television ad this past weekend as a doubling down on the candidate’s insistence on avoiding a visionary campaign message.

At Wednesday night’s St. Peter’s University/PolitickerNJ.com debate, the challenger repeatedly pointed out that he is the only candidate providing a detailed plan for the city on his website. But a plan and an engine to prod people to victory constitute two different things, the insider said.

“If I was the mayor, and I had Jerry’s and Steve’s resumes on my desk, I would hire Steve – to work for me, no question,” the insider said with a grin. “What he hasn’t done is prove that he will be able to manage people and inspire them to work for him. Steve has not demonstrated executive capacity.”

To his critics who question his ability to motivate people, Fulop again made the case Wednesday that through hard work he muscled his way up from being the lone voice of dissent on the city council to the leader of a council majority.

Yet whatever data Fulop puts forward as evidence of momentum and carefully constructed political dominance, Jersey City diehards always revert to the intangibles, as if disbelieving the notion that the Wall Street-schooled Fulop can penetrate the entirety of the hard-edged blue-collar city.

Inevitably, they note the stylistic divide in the mayor’s race.

“You won’t find two more different candidates,” Healy conceded this week in a conversation with PolitickerNJ.com.

The mayor comes across as the consummate urban Irish politician: the hearty, personable, likeable local brand who staggers into re-election trailing a mishmash of episodes and character traits, including getting maced by cops in Bradley Beach, mumbling assent to yarmulke-wearing dirtbag Solomon Dwek in an FBI tape, a YouTube repertoire of Rat Pack standards sung in an easy going baritone, a respectable record pulling dangerous guns off the streets, a solid, patriarchal glow earned with four kids and five grandkids all local, the knock as a less than avid worker who spends too much time in the taverns, who hasn’t mustered the best collection of crumbums around him, some of whom did time in the can, and, for it all – this by the reckoning of friends and foes alike – a rep as a genuinely good person.

Fulop comes across – and this is a term another Hudson insider uses – as an academic.

He’s been on the city council fighting city hall for eight years and yet he still can’t shake the tag that he’s not of Jersey City. He’s an outsider. And he will always be an outsider.

“He’s always on that BlackBerry,” said former Assemblywoman Joan Quigley, a Healy backer. “Jerry is the kind of politician who is very accessible. But if Steve campaigns while on his BlackBerry all the time, a lot of people will consider that rudeness.”

A Fulop backer told PolitickerNJ.com the criticism is hogwash.

“Steve is operating,” the councilman’s supporter said. “He has an army out there and he’s leading a revolution. He’s talking to all his people constantly. He’s very hands-on. That’s Steve being personable on his BlackBerry. He’s not hanging out back-slapping at the bar. Jerry? He’s Frank Skeffington. Come on. This is the 21st Century. Jersey City needs a 21st Century mayor.”

Skeffington, incidentally, is the mayor and main character in Frank O’Hara’s classic, “The Last Hurrah.”

Fulop appears alert to the narrative that he’s an out of town technocrat, and in the debate noted his youth working in his immigrant parents’ deli in Newark and his decision to enlist in the U.S. Marine Corps after 9/11.

Someone who knows about getting branded and hided with the outsider tag, financier turned Mayor Bret Schundler (1992-2001) said as much as people play up stylistic differences, ultimately they don’t matter – even in a gritty burgh like Jersey City.

“Personal style is not critical,” Schundler said. “Different candidates can have different styles. You may win some votes based on style. But people make judgments based on what you will do or try to do and how effective you will manage the city. Those are judgments people are trying to form.

“Healy has been there and people have a sense of what he wants to be and do,” Schundler added. “With Fulop, they have to conjecture. A lot of people will vote for him if they think he will be effective. When I campaigned I focused specifically on proposals and spent a lot of time explaining how we can implement policy.”

Schundler doesn’t see that this time, at least not yet, as insiders continue to embrace Healy, leaving the challenger mostly in pursuit of those voters fed up with retreads.

Some of Fulop’s people were convinced they would have his backing.

It went back to 2008 when the up and coming councilman threw his support behind Pascrell’s candidate for president, Hillary Clinton, as a counterweight to Healy’s backing of Barack Obama.

Pascrell liked the kid. He was especially impressed by the fact that Fulop fought in the Iraq War.

Fulop’s allies figured if they didn’t have a friend for life at least the elder statesman would stay out of the fray come collision time with Healy.

But a Jersey City source said they should have expected the earlier alliance would have crumbled when Tommy Bertoli went to work for Steve Rothman, Pascrell’s 2012 Democratic Primary opponent.

“Tommy has to make a living, I get that,” said the source. “But when Steve let Tommy in there to operate against Bill, there’s no way Bill was backing Fulop at that point. What, are you kidding me?”

A Fulop source said what’s significant about Pascrell and others who chose to endorse the incumbent mayor was the piecemeal quality to it, compared to a stage creaking with establishment backers in 2009. “This time, Healy has had to chase after them like donkeys through the desert,” the Fulop ally said.

Back at the bar, the insider felt his elbow jarred by a stranger wanting to know who would win the Jersey City mayor’s race.

“I think Healy is a weak incumbent who is there for the taking but Fulop hasn’t made his case,” said the insider. “Right now, I say Healy 51%, Fulop 49%.” 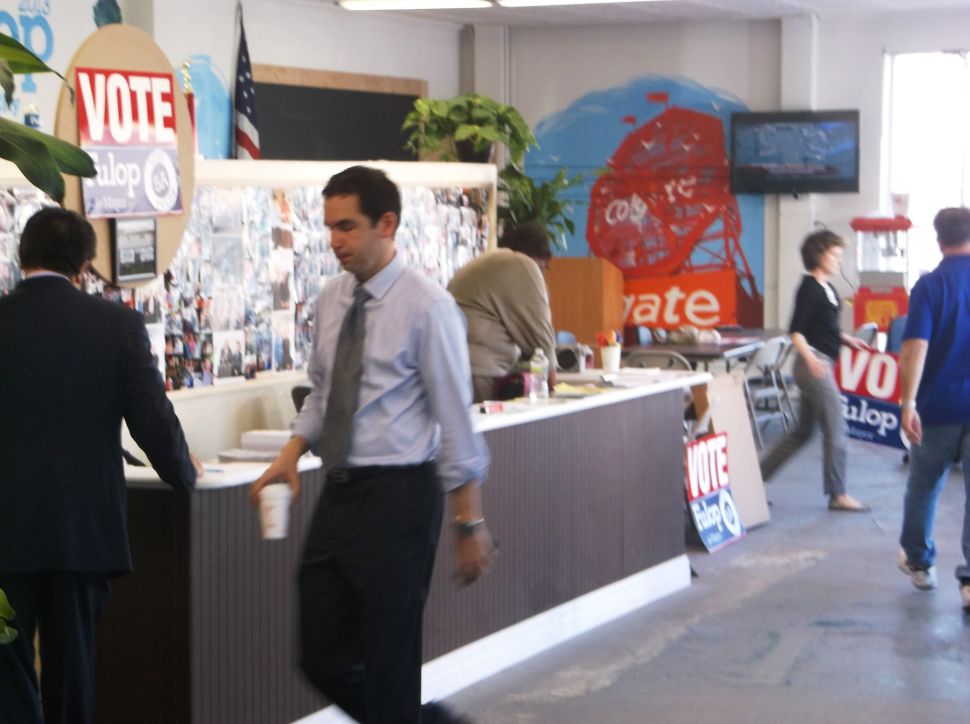