A small farm in Woodside, Queens, grows vegetables along the right-of-way of the Long Island Railroad. (Photo: Richard B. Levine)

I have no idea where my food comes from, but I hope it’s shipped by rail from a California factory farm.

That’s why I’m skeptical about the urban farming craze that’s sweeping New York City. Inspired by the realization that New York is local to eight million people, farming enthusiasts are rushing to claim the city’s tiniest, most sterile slivers of real estate as if they were quarter-sections of bottomland. In its manifesto “The Potential for Urban Agriculture in New York City,” Columbia University’s Urban Design Laboratory identifies nearly six thousand acres in the five boroughs that it considers ripe for cropping, from NYCHA housing projects to traffic medians. There are rooftop farms, hydroponic farms, even skyscraper farms on the drawing board.

Boosters invoke the usual locavore rationale for growing New York’s food right where we eat it: by minimizing the food-miles from field to fork, urban farming reduces fuel consumption, shrinks the city’s carbon footprint, cuts out corporate middlemen and composts sinful food waste into life-giving fertilizer. But it’s a cure-all for just about every other discontent as well, according to UDL, a “synergistic solution” that alleviates food insecurity, fights diabetes, rehabilitates vacant lots, provides job skills, sparks economic development, and promotes “community empowerment,” “environmental justice” and “social interaction.” It will even soothe our neuroses, letting New Yorkers “reconnect with a food system that many feel is somehow out of their grasp.”

Politicians are listening. Council Speaker Christine Quinn’s FoodWorks white paper salutes urban farms as “vital community assets,” while Manhattan Borough President Scott Stringer’s FoodNYC report vows to “establish urban food production as a priority for New York City.” Activists are clamoring for more city-owned land and farmer’s markets, free municipal composting, mandatory procurement of local food for schools and an “urban agriculture ombudsman.” Officials are backing many of these proposals; tax breaks and zoning preferments have been enacted and a registry of likely farmland established. Urban farming is gaining adherents, high-profile showcases, academic cachet, political clout and a heady aura of possibility: if farms can make it in New York, they can make it anywhere.

But can farming make it in New York? And should it? I’m not so sure.

For one thing, the linkage of local farming to efficiency and sustainability is dubious. The locavore obsession with reducing food-miles has been roundly debunked as a false economy that may actually worsen carbon emissions. That’s because the high-volume, long-haul food transportation perfected by industrial agriculture is fantastically more energy-efficient than the low-volume, short-haul shipments of locavore distribution systems.

A typical semi truck, meticulously packed and scheduled by corporate bean-counters, will carry 20 tons of food six miles or so on a gallon of diesel—that’s 120 ton-miles per gallon, in the jargon of freight fuel-efficiency. A freight train gets a whopping 480 ton-miles per gallon. Compare them with, say, the local farmers at the Union Square Greenmarket, whose light trucks and vans typically haul more dead weight—farm-stand, vehicle and driver—than produce. The most fuel-efficient farmer I talked to there reckoned that at peak harvest he burned nine gallons of diesel to bring two tons of potatoes 127 miles from Roscoe, N.Y., for an efficiency of 28 ton-miles per gallon. Hauling each spud from upstate thus requires as much fuel as moving it 585 miles by corporate semi or 2,340 miles by rail. Those disparities hold even for short intra-city trips: if a cargo van consumes just a gallon of gas hustling 200 pounds of tomatoes from a Brooklyn micro-farm to a Midtown market, it will burn more fuel per tomato than a fully loaded semi would bringing them up from Florida. 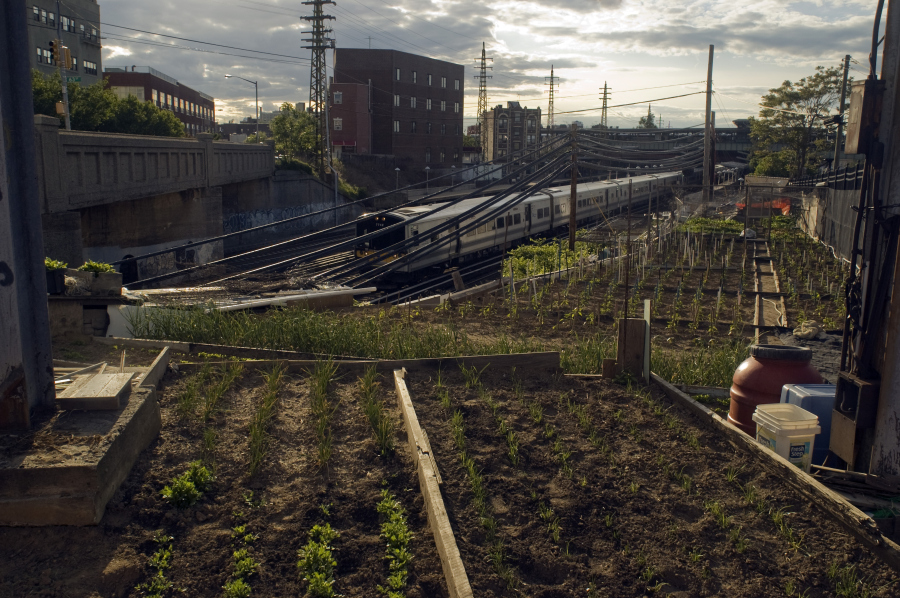