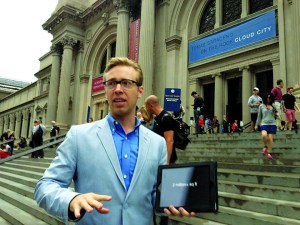 Nick Gray looked sharp as he buzzed around the Metropolitan Museum of Art’s Great Hall on a recent Saturday night, greeting members of his tour group and directing them to the coat check. In an immaculate navy blue sweater, striped tie and brown wing tips, the 31-year-old looked like a freshly pressed Ivy Leaguer and exuded a wholesome, open charm.

Once his group of roughly 20 souls had gathered at the base of an Egyptian statue, Mr. Gray asked them to introduce themselves by making a gesture and naming a passion. There were curtsies, twirls and air punches. Passions included Mickey Mouse and Amazon.com. Mr. Gray executed a kung-fu chop and said he was passionate about the Metropolitan Museum of Art.

Like most museums, the Met offers official docent tours. Mr. Gray’s “Hack the Met” excursions are not part of these. He belongs to the museum’s young membership group, the Apollo Circle, but his tours are not even remotely sanctioned by the museum (which did not return The Observer’s calls for comment). Nevertheless, he has been steadfastly giving them, free of charge, nearly every Friday and Saturday night for the past year. The operation isn’t exactly underground. There’s a Facebook page and a website, both of which sport photos and iPad footage of high-profile participants: Girls star Allison Williams beaming at the camera, Vimeo founder Zach Klein posing in front of a candy-colored Ellsworth Kelly painting, and sundry venture capitalists, video game designers, models, management consultants, playwrights, poker champions, artists, entrepreneurs, yogis and journalists who have drunk in Mr. Gray’s Met monologues.

“The best part about the tour,” said CollegeHumor.com co-founder Ricky Van Veen, who has known Mr. Gray since they attended Wake Forest University in North Carolina together, “is that it’s almost like an SNL sketch of a Met tour guide who’s pretty good at his job, who knows like 80 percent of the information.” Mr. Gray’s passion for the museum is not the product of an art history degree, nor is it accompanied by art world aspirations: he is a partner in his father’s Alpharetta, Ga.-based company, Flight Display Systems, which installs television screens and other techie toys in military and private aircraft.

Mr. Gray, whose slight frame, bright white smile and cropped golden hair lend him a boyishness that contrasts sharply with the slick-looking guy in a black suit and sunglasses staring down visitors to his website, doesn’t reveal much about the tours in advance. “I think part of wanting to go on his tour was the layer of mystery,” said Charlie Todd, the founder of Improv Everywhere. Attendees, who are either personally invited by Mr. Gray or request a tour on HacktheMet.com, are advised to “dress nice and be on time.” It is also recommended that they bring a flask.

Once the summer-camp-style introductions were done, Mr. Gray taught the Great Hall group some code words. If danger should arise, presumably in the form of a Met official, “samurai” meant split up and reconvene in the cafe by the American Wing. Drinking, he explained, was best done discreetly. “I will tell you when to drink,” he said. “We will refer to our drinking as ‘art appreciation.’ So I will say, ‘this is a great place for art appreciation.’” The briefing done, the members of the conspiratorial little circle put their hands together and raised a rousing cheer: “m-m-m-museuuum!” (Not everything warranted discretion.)

The first opportunity for “art appreciation” arrived in an elevator the size of a closet. After admiring a medieval limestone effigy of the Virgin and Child, the group packed in and awaited instructions. “You have about six seconds to power down a shot of alcohol,” said Mr. Gray. The flasks came out. “There’s no camera,” assured Mr. Gray.

“What is that?” asked a woman clutching a vial of whiskey wrapped in tinfoil, pointing to a camera mounted in a corner.

The doors opened, the flasks disappeared, and the group charged purposefully through European Paintings. Mr. Gray creates custom routes and rehearses them before each tour. For this one, he’d designed an arty Easter egg hunt, challenging the group to guess which piece in one gallery was the most expensive acquisition. Distracted by the impressive Cranachs, Holbeins and Durers, no one went for the diminutive Duccio Madonna and Child, purchased for $45 million in 2004. “This is the stake in the ground,” Mr. Gray said. “This is where European painting began.”

Then it was on to a sensual Thomas Gainsborough portrait of Mrs. Grace Dalrymple Elliott, who, after leaving her husband and escaping a convent, became a high-class—Mr. Gray faltered. “She worked for her means,” he stated delicately, and then led the group in blowing her a kiss. One wonders what the rumored mistress of Napoleon would have made of the small herd of T-shirt-clad admirers assembled at her feet.

Soon it was back to the elevator—which Mr. Gray refers to as his “office”—for more art appreciation. The group emerged and piled into the Bashford Dean room, a secluded nook of Arms and Armor devoted to its founding curator, to stealthily steal a few more sips. Then Mr. Gray instructed everyone to partner with a tour group member they didn’t know, and the pairs wandered off to explore the medieval weaponry. 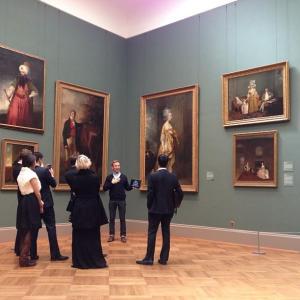 Mr. Gray, who grew up in Georgia and moved to New York in 2007, discovered the Met two years ago when a girl brought him there on a date. He began leading the tours after realizing how few young people frequent the museum. When he asks peers to name their favorite New York museum, MoMA will get a few nods, but apparently no one ever mentions the Met. “I met someone the other night who said, ‘the New Museum,’” Mr. Gray told the group with a pained expression. His mission, he said, was to make “the best museum in the world” hip for a younger crowd.

Before launching Hack the Met, Mr. Gray threw monthly parties organized around activities like juggling lessons or performances by bands like Freelance Whales. New York magazine dubbed him a self-styled “Lois Weisberg for the Tumblr age.” His Met tours are an extension of that kind of hyper-sociability. “You would think this guy is giving away his Friday and Saturday nights,” said Mr. Van Veen. “But if you think about it, overall he’s becoming more social. While everyone else from 7 to 9 p.m. is getting ready to go out, he’s at the Met, meeting new people and doing his thing.”

His attitude, Mr. Van Veen continued, is anything but elitist. “He has a very populist approach to New York and to socialization. I’ve never heard him say anything like, ‘I don’t think I want that person to be on the tour, I think they wouldn’t be a good look for it.’” Still, participants tend to be up-and-comers. Mr. Gray recently told Mr. Van Veen that his wait list was hovering around 1,000 people and he was considering bringing on more guides. Mr. Van Veen didn’t think it was a good idea: “This is about you,” he said he told his friend. “If people want a tour not led by Nick Gray, they have plenty of options.”

After a breakneck pass through Musical Instruments and Asian Art, the group relaxed in what Mr. Gray called the “boardroom,” slumping into seats around a massive walnut table by George Nakashima. He took a moment to admire the wooden butterfly joints and then whipped out his iPad to lead the group through a Met history slide show, covering factoids like the museum’s square footage and founding date. (He favors PowerPoint as a mode of communication: “Nick is the kind of person,” said Mr. Van Veen, who, “if you run into him and you’re like, ‘Hey what’s been going on?’ he will literally get out an iPad and give you a slide show.”)

The group swept through the elegant rooms in the Wrightsman Galleries and Egyptian Art (pausing at Mr. Gray’s favorite piece in the museum: a 3,000-year-old fragment of the face of a queen, sumptuously carved in yellow jasper, which serves as his Facebook cover photo: “That’s how much I love it”), the American Wing, where Mr. Gray took a moment to telepathically thank the staff for its scholarship, and the Arts of Oceania before finally arriving at the “Switzerland of the Metropolitan Museum of Art,” as he calls it: the Petrie Court Café and Wine Bar, which won’t kick customers out, even after closing time. The staff recognized Mr. Gray, who whisked wine orders to a waiter, and six bottles promptly materialized on the long table.

One of those sipping from a long-stemmed glass was Vishal Gondal, the founder of India’s largest gaming company and a Hack the Met convert. “I’ve been to New York and so many places so many times,” he said, “and I’ve never even dreamt of going to a museum. I mean, it’s not even on my short list. It’s not cool to go to a museum. You go to bars, you go to good restaurants.” Many members of the group had never been to the Met before, but glances at the tour evaluation forms Mr. Gray asked them to complete suggested they were eager to return.

After the last of the wine disappeared, the tipsy tour group left Petrie Court and wandered through the empty Greek and Roman wing, gazing wistfully at ancient artworks normally thronged by tourists. The graveyard-shift security guards seemed to know Mr. Gray, and they let the group take its time to meander back to the Great Hall. As the little crowd collected coats and began casting around for evening plans, Mr. Gray reminded everyone that the night was young. The tour, it seemed, would have one more stop: drinks downtown at his apartment. 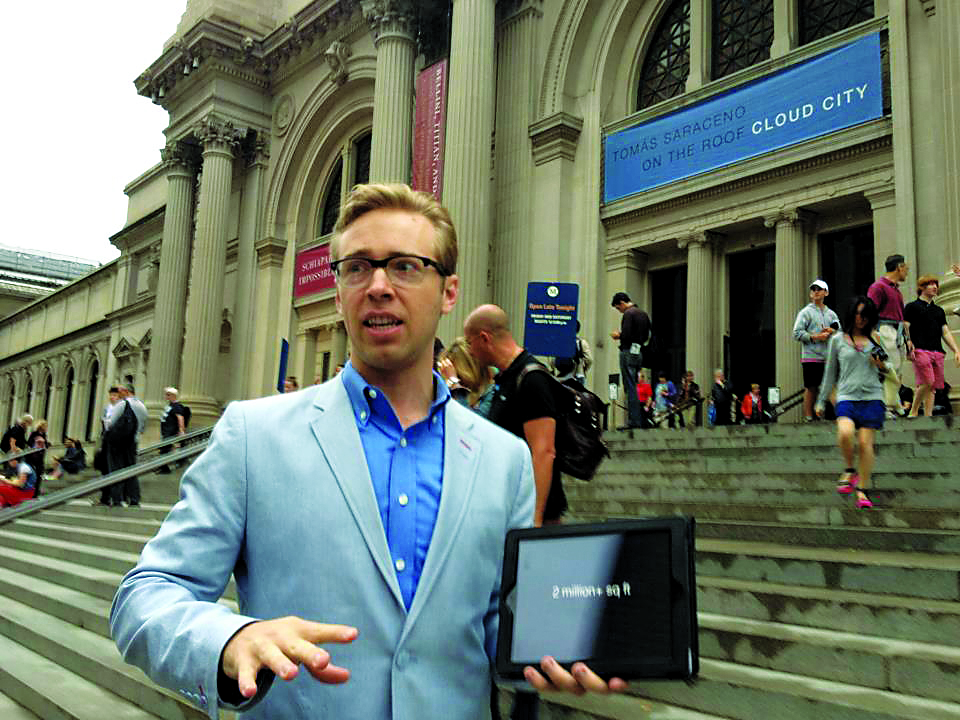