Hey, if fictional restaurants from Bret Easton Ellis novels can get rated on Yelp, why not some of Manhattan’s penitentiaries? That was the question when The New York Post picked up the story two years ago, Rikers Island averaged four and a half stars, which is half a star higher than Balthazar. Central Booking, according to the Post, only managed to earn itself two.

But that was apparently during the salad days of New York’s penal system: Today, Rikers has slipped an entire star to three and a half, while the Tombs lost half a star. (Maybe it’s time for the prisons to change their chefs.)
Below, some of our favorite reviews of the correctional facilities in New York. At least we know they aren’t paying for fake reviews.

Rikers is a popular and intimidating prison, when you go on that highway/bridge to get to the facility you feel like you are on your way to Shutter Island!

I went on a class “field trip” here many years ago and they must have asked the prisoners to scare us because they were doing anything they could to drill into our heads that prison is hell.

One kid in the class had an earring on and was harassed so bad he never wore it again.

If you are going to prison this is the place to be, because you will learn quickly that you messed up and hopefully you will get your act together.

They don’t serve good food though, so be prepared!

As a life-long Trekker, I was so excited to find out that Jonathan Frakes had FINALLY opened his private island to Star Trek fans. However, after going I have to say that anyone considering going to this joke of a Star Trek con is wasting your time. NO ONE cos-played, there was no schedule AT ALL, and Jonathan didn’t even hold a Q&A OR sign autographs! In fact, the whole time I was there I didn’t even see him once! For an ENTIRE ISLAND named after the one and only William T. Riker, to not even have the actor who played him show up for even a small appearance was terribly disappointing.

If you are trying to decide whether or not to go, set a course for as far away from RI as you can and warp 9.9 out of there! I would have liked to have said to my fellow fans, “Engage!” for a trip to Riker’s Island, but in the end it was a total disappointment.

Pinky and the B:

My big brother was a resident here off and on for years. He had free health care, free schooling, a water view and a gym membership with his residential plan.
I went to see him here many times while Mayor Dinkins was in office. It was a “lively” community with it’s own shuttle bus to the island. Going to visit him there was a growing experience.
His friends there seemed very nice and liked to share Reese’s Peanut Butter Cups a lot for some reason. Too bad they had to share one phone. But my brother said living in a gated community is not all that great but at least they had metal detectors to protect the residents. He said he felt like a prisoner!

If you’re here, you’re probably not gonna like it.

I didn’t try the food, but the single serving cereal boxes make for an acceptable pillow. Third star is for not strip searching me.

Their menu needs work.The Kool-Aid helps the nasty water taste a little bit better, but their sandwiches are awful. The bread is reminiscent of styrofoam and the bologna is rough around the edges. Also they need ventilation… the stale air makes your hair greasy. And the staff is so disgruntled.

I realize one star is the lowest rating you can give, but I’d still like to say that the star is for my cell-mates, most of whom were good-humored and polite and in for petty drug violations. And, to be honest, the guards could have been worse.

But the Tombs only gets one star because it is filthy. Really filthy, as in unhygienic. It’s a human rights violation to force people to stay here against their will (and of course most of the people in here are in here against their will). The bathroom is not only out in the open, it’s covered in shit, and you have to ask for toilet paper. There’s no soap.

The food was ok, but since I ended up paying a $120 fine, it was a little overpriced, for some pb&j and corn flakes. 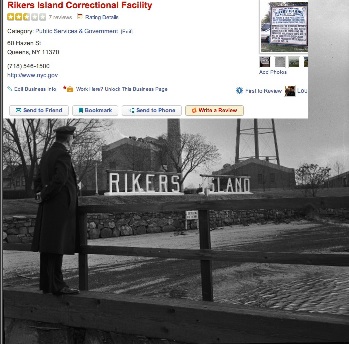