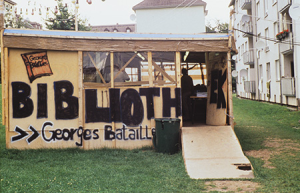 The Dia Foundation announced today that Swiss artist Thomas Hirschhorn’s next installation in his monument series will take place at the Forest Houses, a housing development in Morrisania, in the South Bronx.

The monument, such as it is, will be to Antonio Gramsci, the Italian Communist leader imprisoned by Mussolini. Mr. Hirschhorn’s previous monuments have included one to Baruch Spinoza, which was made mostly of silver duct tape, and others to Gilles Deleuze and Georges Bataille, of similar materials.

The Gramsci monument had already been announced but its exact location wasn’t known until today. The monument opens July 1 and runs through Sept. 15.