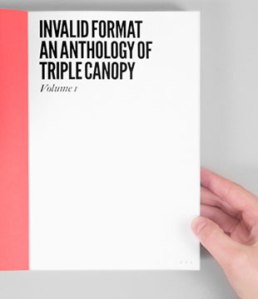 Triple Canopy, the online magazine that operates an event space at 155 Freeman Street in Greenpoint, Brooklyn, is celebrating its fifth anniversary this summer with a $100,000 fund-raising campaign to support “long-term infrastructural improvement,” according to Peter J. Russo, the organization’s director. It will relaunch in September with Triple Canopy 3.0.

“We’re taking time to reflect on the past five years,” Mr. Russo said, “during which reading and viewing online have evolved considerably.”

He said the new website, rather than simply featuring online articles, will offer a range of templates for presenting artist portfolios, performance and sound works, e-books and public programs. It’s a way of reconciling Triple Canopy’s website with its physical event space, where over 100 people gathered just last weekend to hear a panel discussion based on a recent article in the magazine about the language of art world press releases.

“Part of this is an argument we’re making that there is no longer an online and offline world,” Mr. Russo said. “They’re not separate spheres of activity.”

The fund-raising campaign was announced last week. So far Triple Canopy has raised about 60 percent of its goal.