The governor said he was glad to see Van Drew, unlike some Democratic lawmakers in the Legislature, “hasn’t forgotten” that elected officials are put in office to protect taxpayer money – not government funding.

“I’m gratified that Sen. Van Drew is supportive of the tax cut and said so publicly. I think there will be other Democrats who will come on board because they understand that it’s an important thing to do and that it’s long overdue, and that this whole language about ‘how do you pay for a tax cut’ is backwards,” Christie said.

“It’s their money in the first place. It’s our job to figure out how to pay for it,” he said.

After publically saying he supports Christie’s plan, Van Drew was criticized by a top union official in the state.

Hetty Rosenstein, of the Communications Workers of America New Jersey chapter, took to calling Van Drew “an asshole” on a social media website after learning of the lawmaker’s support of the Republican governor’s plan.

The next day, Van Drew shot back, saying if supporting a plan that helps middle-class families “makes me an a-hole, then I’m proud to be an a-hole.” 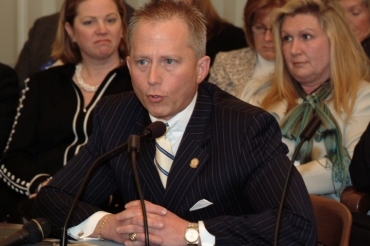