“I don’t want that job,” insisted the former Seton Hall University basketball star. “I have a job already.”

The chatter is starting on the streets about the possibility that no single candidate in the four-man mayor’s race gets to 50% plus one.

If incumbent Mayor Jerry Healy and downtown Councilman Steve Fulop make it to a head-to-head, Walker could be the kingmaker.

At least one source speculated that either candidate could dangle recreaction director to Walker and win with his support.

Walker laughed heartily at the rumor.

Walker has not excelled in fundraising. He said he’s hovering in the $50,000 range and saving it for Election Day GOTV.

He has a fundraiser scheduled for May 2 at New Jersey University.

He jabbed at Fulop in a short interview with PolitickerNJ.com.

“People don’t trust Steve Fulop because they don’t know where he’s from, he said. “He never said where he was born and grew up.” 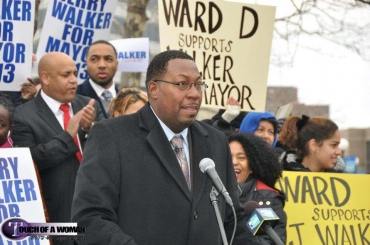