Watson Coleman is a former state party chairwoman and has served in the Assembly since 1998.  She has served as the Assembly Majority Leader and as Chairwoman of the Appropriations Committee.

“I am proud to have Assemblywoman Watson Coleman serve as chairwoman of my campaign,” said Buono. “For more than a decade, she has proven herself as a political force and fierce advocate for the people of New Jersey. We have a shared understanding that everyone in New Jersey deserves the opportunity to receive a quality education and find a good-paying job.” 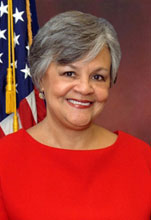