An administrative law judge ruled in favor of keeping the East Orange Mayor’s candidate for governor in the Democratic Primary, which helps Bowser maintain his slate for better ballot position as he fights the Essex County Democratic establishment.

Bowser’s chief of staff was the only one of four anti-establishment Democratic candidates for governor who survived a challenge to their petition signatures by the Democratic State Committee.

Newark Mayor Cory Booker hired the former campaign services director for the Democratic Senatorial Campaign Committee as his new finance director, according to a report this week by the Star-Ledger’s David Giambusso.

The former Livingston councilman was honored Thursday along with several former members of the township’s governing body in celebration the township’s 200th anniversary. Isherwood, who served on the council in the early 1970s, was the elder statesman of the members in attendance.

The township that is home to two of the state’s governors and named after a third celebrated its 200th anniversary Thursday with a ceremony attended by dozens of current and former state and local officials.  On hand for the event were Governors Byrne, Kean and Codey and Gov. Christie gave the keynote address.

Back home after a vacation, Christie quickly dominated the gubernatorial contest, receiving backing from another labor group that last time went to Jon Corzine: the Operating Engineers.  Although his job approval slipped slightly in the latest Rutgers-Eagleton poll, it’s still at 68%. When state Sen. Barbara Buono attempted to catch him flat-footed with Essex County Executive Joe DiVincenzo at the opening of a sea lion exhibit, the Christie camp pre-empted the senator’s press conference on gun control by releasing its violence task force study. That forced the offensive-minded Buono to go on defense and react to the study. To end the week, Christie played up the divide between Senate President Steve Sweeney (D-3) and Speaker Sheila Oliver (D-34) largely on the issue of public unions: a persistent Democratic Party wound. If the key to politics lies in keeping one’s enemy in disarray, Christie appears happy to hold to that strategy.

Party establishment sources bad-mouthed the candidate’s reported choice for State Democratic Chairman: Assemblyman Jason O’Donnell (D-31), revealing the depth of an ongoing rift in the Democratic Party. Like Buono, O’Donnell did not support Senate President Steve Sweeney’s (D-3) overhaul of public worker pensions and benefits. Those around Sweeney are unlikely to want a vocal critic of the Senate president’s key reform leading the charge for the party in a battleground election year, particularly for South Jersey. Making matters worse for Buono, Speaker Sheila Oliver (D-34) is unlikely to be thrilled with O’Donnell, who was part of a coup to remove her as speaker. More bad news haunted the Democratic challenger for governor. Elizabeth Mayor Chris Bollwage openly disparaged her campaign, her appearance on Chris Matthews’ Hardball show lacked polish, and her planned press conference on gun control broke down when Gov. Chris Christie pre-empted it by releasing his task force’s study on violence.

The former mayor of Glen Ridge fought a State Democratic Committee challenge to his petition to run for governor.  He could not withstand the presence of numerous registered Republican petition signers and duplicate signers who agreed to back him in a Democratic Primary. To be fair, Bergmanson made the point to PolitickerNJ.com that just 41 of his 1,300 submitted signatures were Repubicans. This week, following an administrative law judge’s ruling, the Secretary of State removed him from the ballot.

When we last checked, Boss was trying to run simultaneously for mayor of New York and governor of New Jersey. If he couldn’t make a decision about which job he wanted more, the N.J. Secretary of State made it for him yesterday when she officially removed his name from the Democratic Primary ballot.

The Union carpenter from Edison looked like a governor when he elegantly walked into rooms with his equally elegant wife at his side. But they won’t see the inside of Drumthwacket unless they’re sufficiently ticked at the Democratic State Committee to accept an invite to a summertime barbecue event, courtesy of Gov. Chris Christie.

PolitickerNJ.com reported this week on an intent to sue filed by the county’s former subcontracted health insurance provider alleging improper influence on Donovan’s decision-making process leading to his removal. The tort claim alleges that Donovan adviser Alan Marcus crushed the contract as a matter of personal vendetta. Donovan’s allies – including Administrator Ed Trawinski – will have their day in court if the plaintiff – Matt Kazmierczak – follows through with the suit, but for now, it’s a sordid tale that makes Donovan look bad.

Local Finance Board Chairman Thomas Neff questioned the Union County Improvement Authority Executive Director’s $160,000 salary and staff of two, comparing it to other improvement authorities whose executive directors earn less but supervise larger staffs. As a consequence, the board deferred the authority’s application for $14 million toward building a college building.

The LD20 Republican challenger to state Sen. Ray Lesniak (D-20) failed to withstand a challenge to his petition signatures.

The Rutgers Attorney resigned from his post at the university after getting caught up in the scandal that cost basketball coach Mike Rice and Athletic Director Tim Pernetti their jobs.

The member of the Rutgers Board of Governors was notably absent from the room as Senate President Steve Sweeney called for his head during a board meeting yesterday, but later surfaced in the board’s closed session. 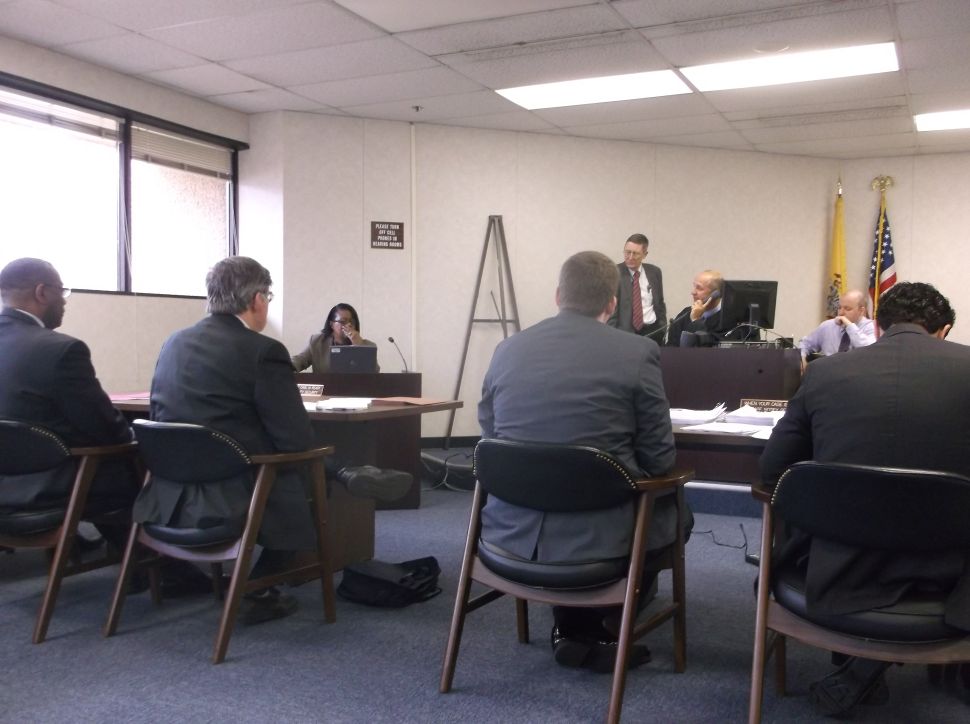