It wasn’t too long ago that the veteran 25th District senator was in the hospital at the tail end of an election season, overwrought by campaign stress. But it appears this time the elder Bucco can pack his bags for Aruba tonight and not have to worry about returning until after the general election. He’s unchallenged.

Beset by all kinds of mayhem internally, the Mercer County GOP Chairman stopped the bleeding this week when he positioned former state Sen. Peter Inverso to challenge state Sen. Linda Greenstein (D-14). Proven winner Inverso on the ticket means another legislative district in play where Democrats have to spend money. Short of Inverso, who else would have given Greenstein – and by extension Senate President Steve Sweeney (D-3) – fits? Answer – considering it’s Greenstein who would campaign like Sherman’s March to Atlanta against a bluebottle fly – anyone. But that doesn’t diminish Inverso’s particular caliber as a challenger.

The veteran anti-establishment senator from the 29th District won’t have a Democratic Primary challenge this year. Look for Rice on the same beach as Bucco.

The incumbent assembly people in LD 20 won’t have to worry about a primary, as those political forces who control the Elizabeth Board of Education opted not to challenge them this year. The good news for Cryan couldn’t have come at a better time, as the assemblyman was wrestling with embarrassing headlines concerning sexually explicit emails he sent  a decade ago to a lobbyist.

The Roselle Council President will have the support of the aligned renegade forces of Elizabeth and Hillside as she runs against incumbent state Sen. Ray Lesniak (D-20). The support is significant, as Rafael Fajardo’s group two years ago defeated the incumbent ticket in the City of Elizabeth, LD20’s largest municipality.

Gubernatorial Contest Winner of the Week

The Democratic gubernatorial candidate appeared on MSNBC on Tuesday, and received a standing ovation and chants of “Barbara, Barbara,” at Thursday night’s Jefferson-Jackson dinner. The bad news for Buono is Christie was on vacation this week.

Rutgers canned its basketball coach after a video surfaced of Rice throwing balls at players and using gay slurs to demean them. Every legislator in the state made to dangle from the bottom of a rope in junior high school gym class came back with a vengeance to land a body slam on the shredded human rag doll that was once the Exorcist-faced sideline prowler.

The school also ditched its athletic director, a hapeless figure in above the fold front page photos before he got the same ax that felled Rice.

Cagey and resourceful, the 20th District incumbent Democratic senator nonethless appears to have a tougher than expected re-election bid this year as the opposition focuses its forces on him while foregoing a chance to challenge his running mates.

Inverso’s 14th District candidacy creates another battleground, one that forces Senate President Steve Sweeney (D-3) to spend money in a district that is not located in the South or in LD 38. 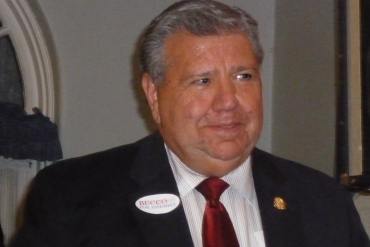