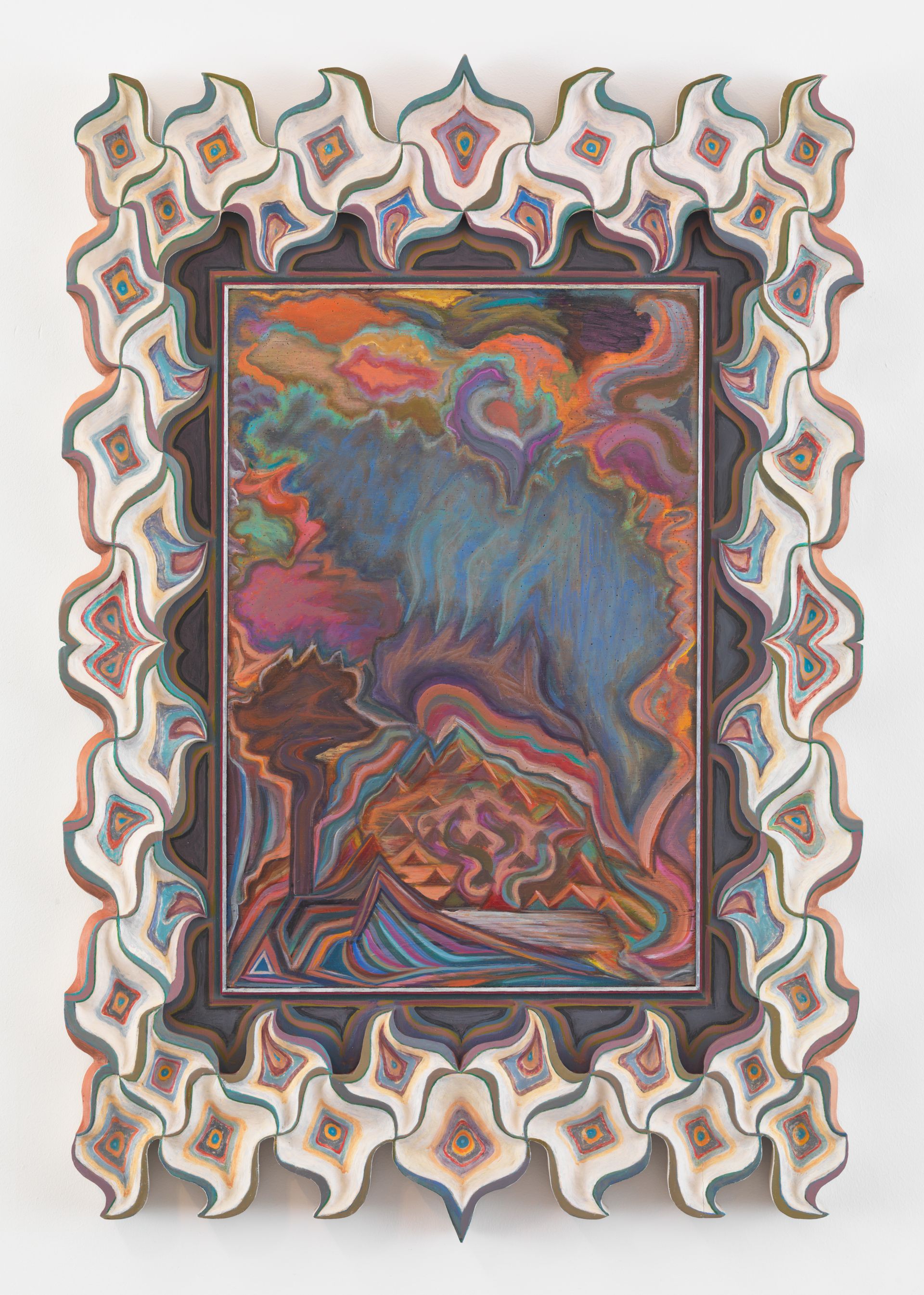 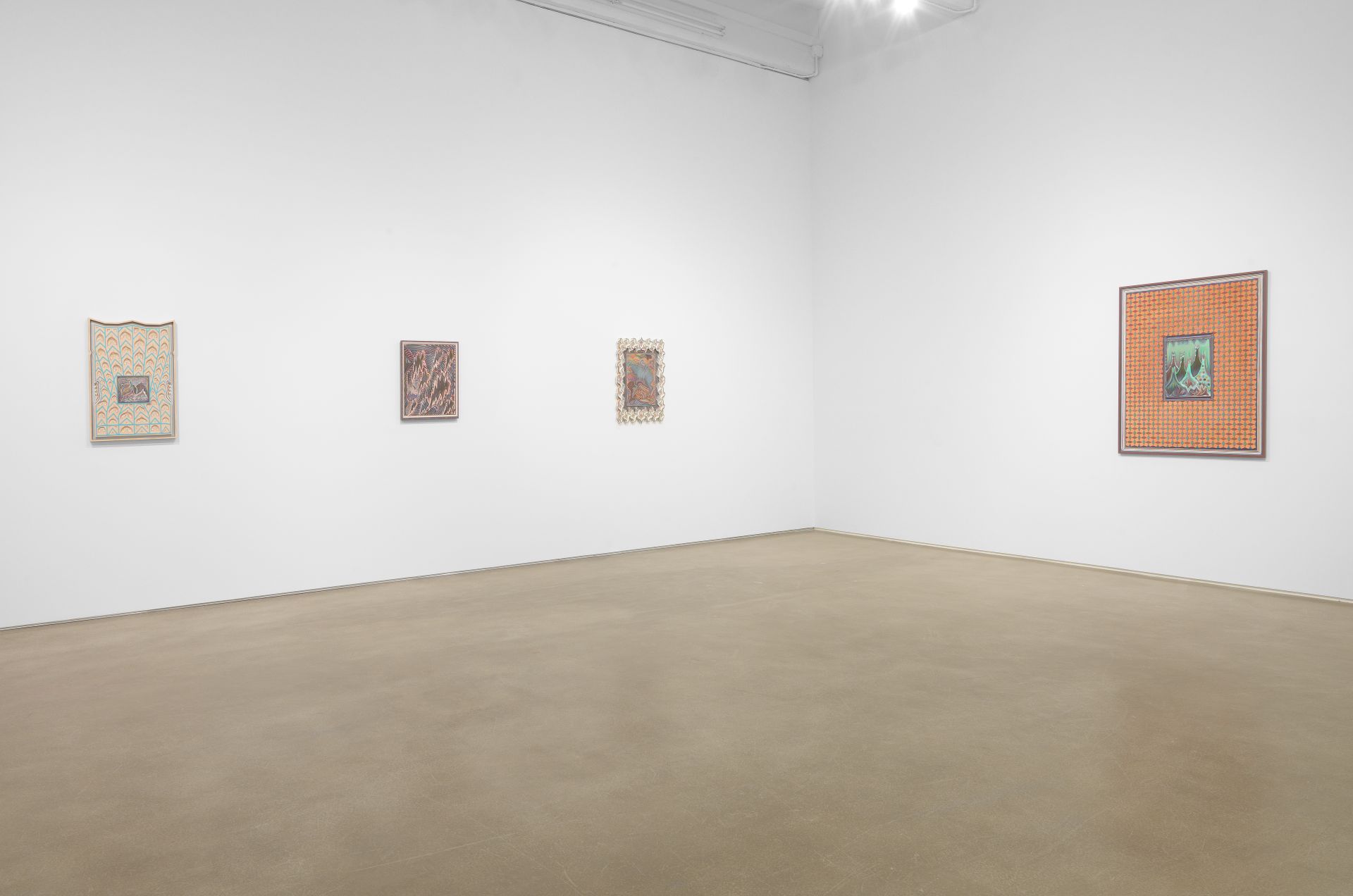 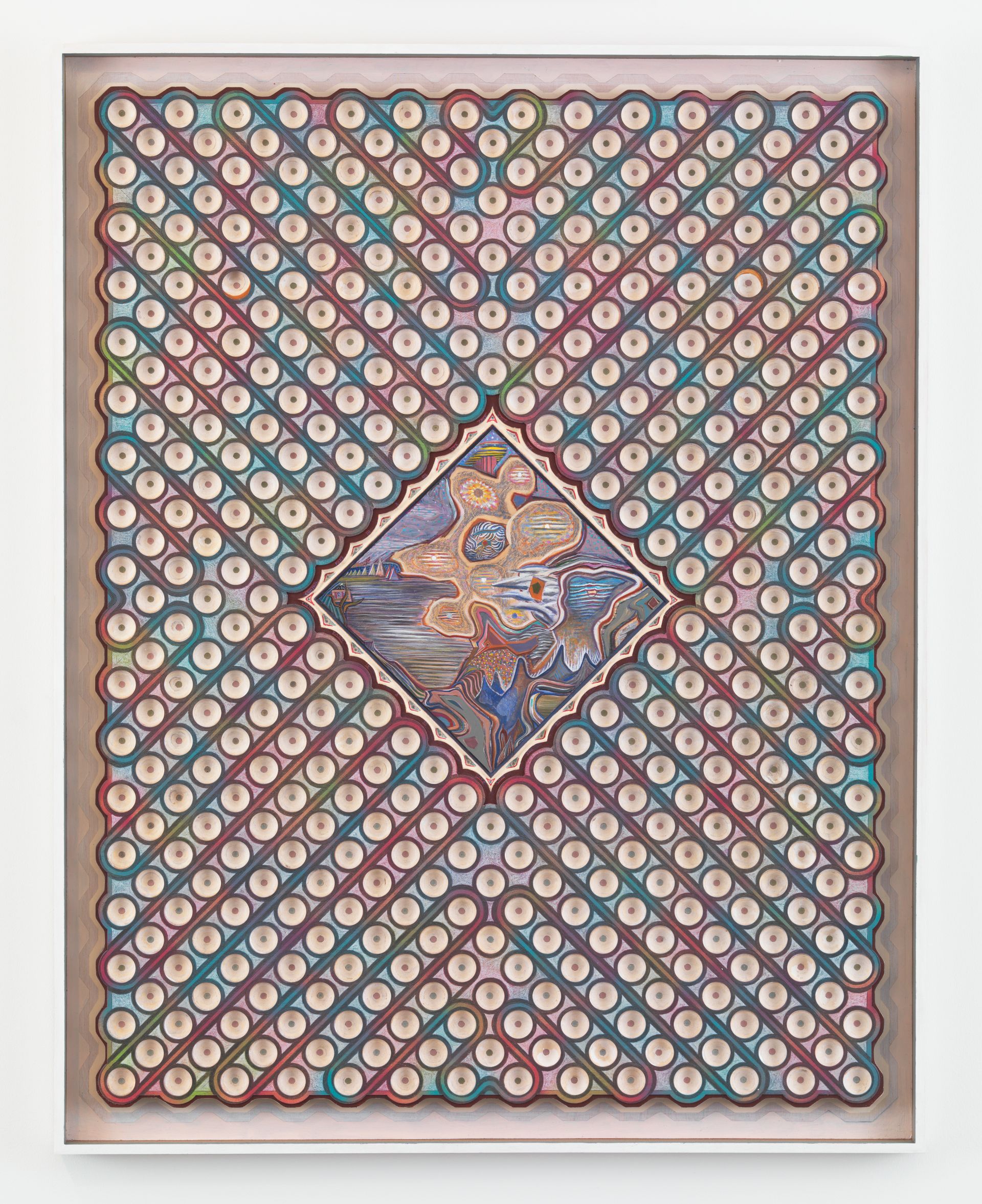 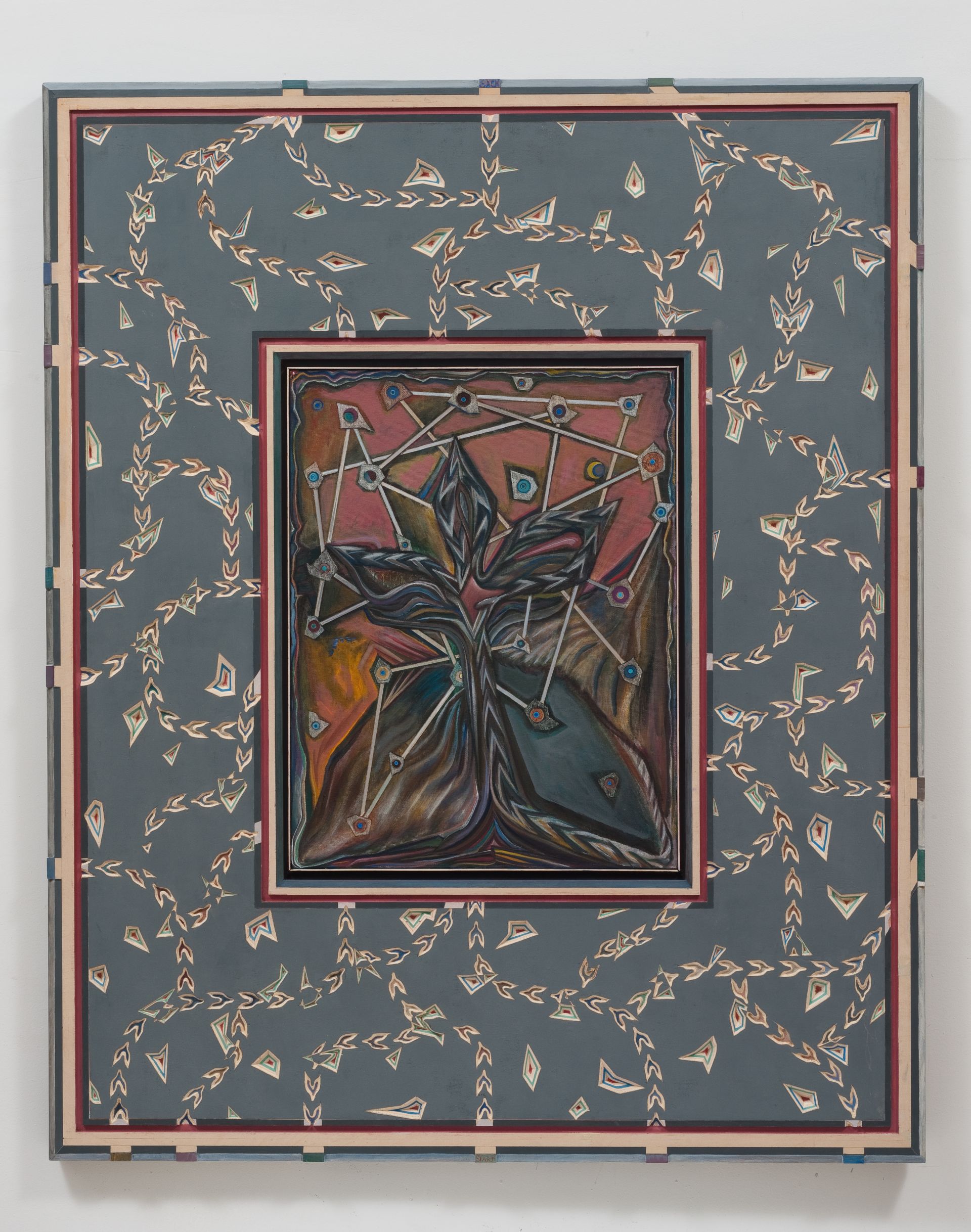 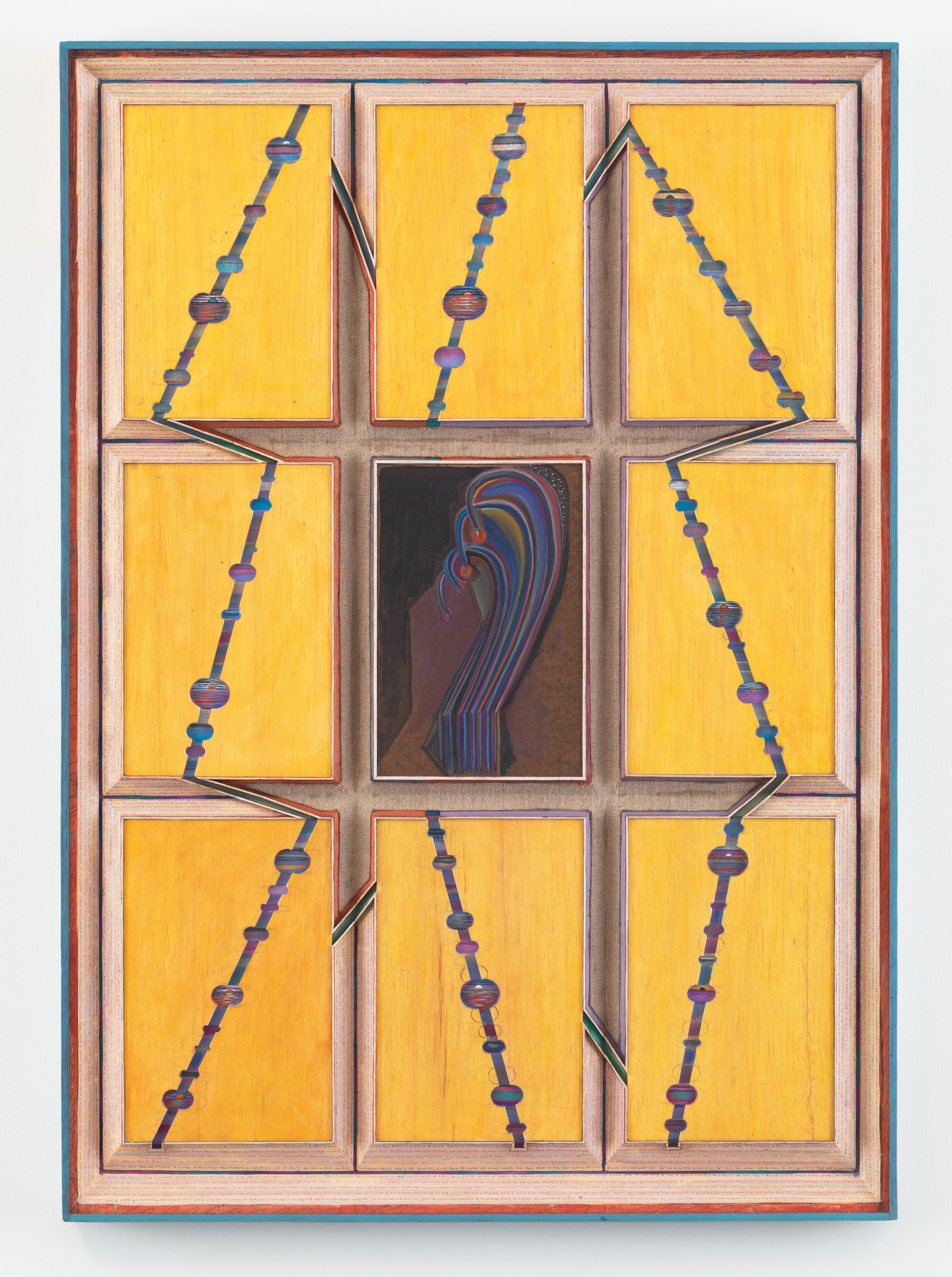 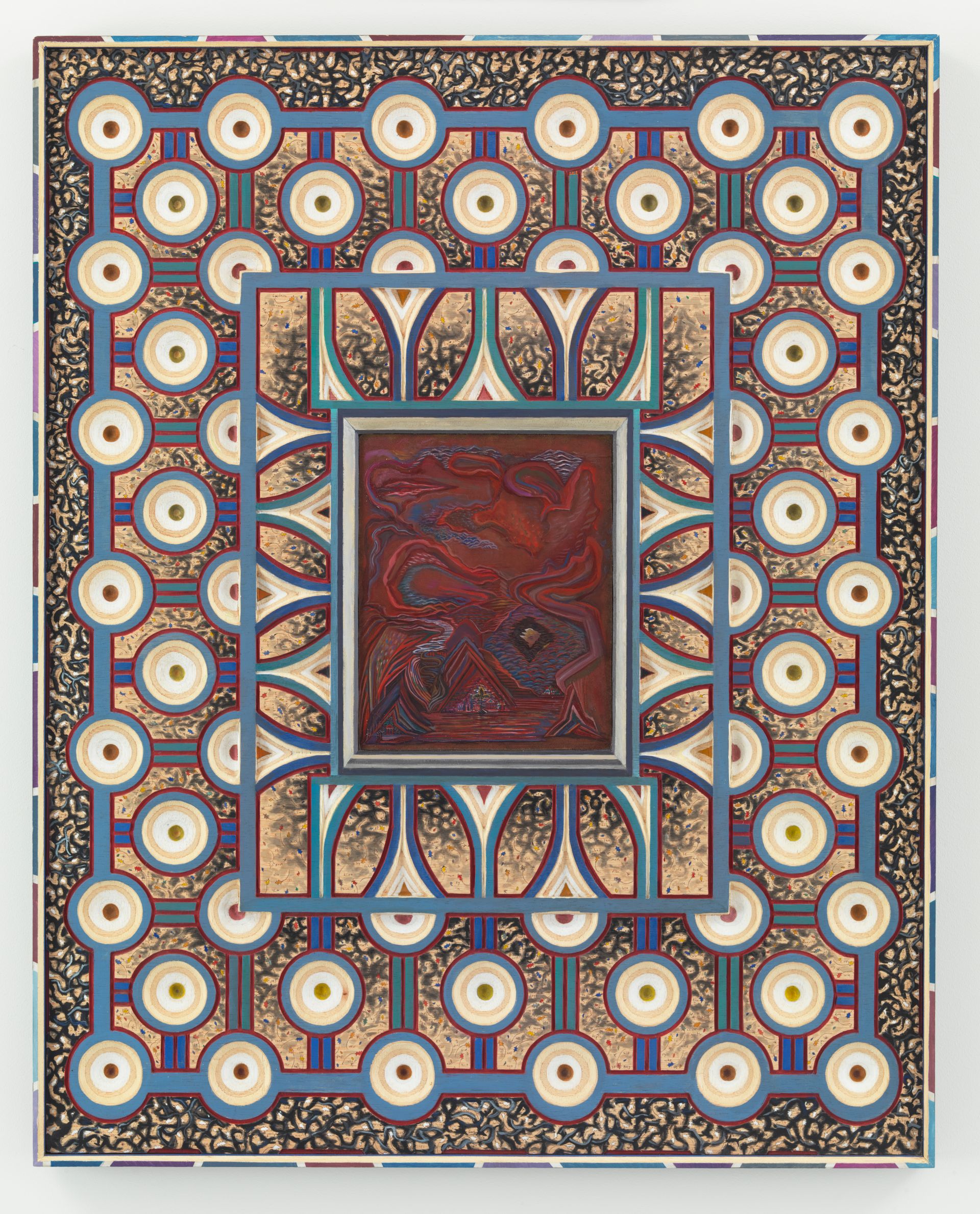 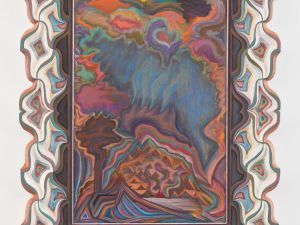 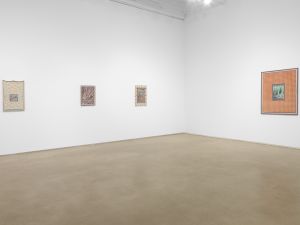 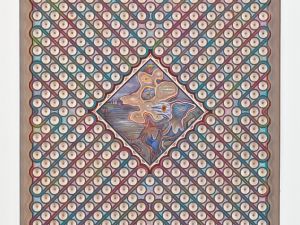 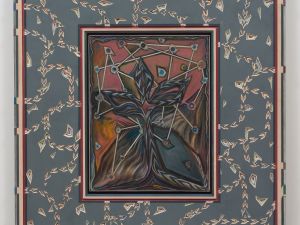 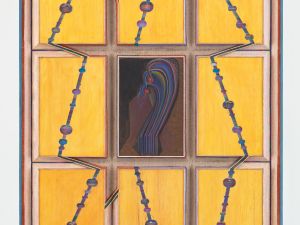 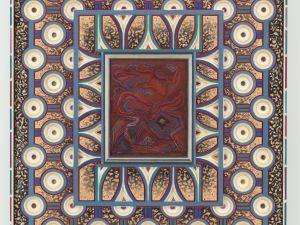 Taking the traditional rectangle not as a constraint to be overthrown but as a conventional starting point to be fully exploited, Zach Harris makes wooden paintings. Cut, shaped, built up in layers and generally framing some smaller, flatter rectangle, the pieces operate with the loose precision of a mirage—unfixed to a surface, each singular effect floats just in front of its motivating parts.

A dense grid of semi-spheres connected with double bars is cut into the panel of Wine Red See to reveal the plywood’s differently tinted layers as a series of concentric circles. Set into these little targets is another rectangle, and within that one is another, deeply beveled, in which is painted a minuscule red temple with portico and pediment between a reflecting pool and a steep mountainscape. The sinuous shapes, the purplish-maroon tones, and Mr. Harris’s clear faith in an abiding pleasure of color and mark-making that has no reference to function make the scene read at first sight like a tie-dye pattern. But it could just as well be a little garden of the world, tipped up into medieval-style vertical perspective and framed within a divine latticework of meaningless but self-justifying pattern.

In Hand Held the Shining Chroma Zones, two points like an elf’s ears at the top of the frame accentuate a thin blue herringbone lattice shining up from a square scene of mountains and motley mists. In Cat Skill, a trippy full-size landscape is surrounded by an ornamental cluster of carved-out wooden shells. And in Belvedere/Krimko Torso, another tiny red temple sits under two large forms built up of overlapping lines of nocturnal color, which look like a pair of roosted eagles on either side of the roots of a tree. This whole torso, outlined in white, leaps out from the panel. But at the same time, it refuses to hang together, because with its variable density of paint and earthily approximate lines, it’s striated like a technicolor muscle. (Through May 4, 2013)