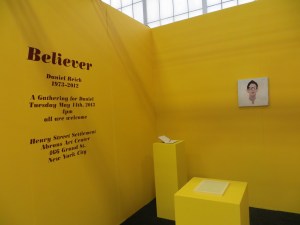 Daniel Reich, the art dealer who passed away on Christmas Day last year, was an early member of NADA, and many of the organization’s current members credit him with bringing them aboard. At the NADA New York fair, there’s a booth dedicated to him, with a notebook racking up numerous notes and signatures, and a portrait of Mr. Reich by the artist Henry Taylor. The painting belongs to the artist Christian Holstad, and the goal, said Heather Hubbs, the fair’s director, is to have it donated to the Museum of Modern Art.

“I wouldn’t be with NADA if it wasn’t for Daniel,” Ms. Hubbs said. The organization will hold a memorial service for Mr. Reich on May 14 at the Abrons Arts Center.

Recently, she was talking with Paul P., one of the artists Mr. Reich represented at his gallery, who wrote a eulogy for his dealer that is also on display in the booth.

As for the fair’s new location at Pier 36 on the Lower East Side–it was held at the Dia Center for the Arts building in Chelsea last year–Ms. Hubbs said she had initially considered the space, but it was under renovation. It happens to be just around the corner from Ms. Hubbs’s apartment, as well as nearby many of the exhibiting LES galleries. Asked how she felt about the fair returning during Frieze Week in New York, she said she was happy to be back, but added, “It seems like there’s still a pull from the Armory, like March and May are still trying to sort each other out.”