Rihanna brought down the house at her concert at the Barclays Center on Sunday night, taking the entire neighborhood with her, according to Prospect Heights residents.

But the loud, booming bass rumblings that disrupted the neighborhood on Sunday night were nothing new for people who live in the direct vicinity of the Barclays Center. These complaints come less than a week after Barclays Center developer Forest City Ratner Companies was ordered to pay the New York City Department of Environmental Protection (DEP) a $3,200 fine for violations after a Swedish House Mafia concert in early March.

The Barclays Center has faced many noise complaints and several potential fines since it opened in September. Residents have complained of noise pollution after major concerts including Jay-Z in September, the Sensation dance concert events in October and the Swedish House Mafia concert. Until last week, the complaints were dismissed on technicalities.

According to city records, inspectors recorded a reading of 55 decibels (dB) for low noise frequency inside a nearby apartment the during the Swedish House Mafia show on Saturday, March 2. The 55 dB rate is about twice as loud as the 45 dB limit, as stipulated by the New York City Noise Code, section 24-231:

“No person shall make or cause or permit to be made any music origination form or in connection with the operation of any commercial establishment or enterprise when the level of sound attributable to such music, as measured inside any receiving property dwelling unit: … is in excess of 45 dB in any one-third octave band having a center frequency between 63 hertz and 500 hertz.”

According to the NYC DEP, noise complaints are the number one quality of life issue for New Yorkers. The agency updated the Noise Code in 2007 to “…balance the important reputation of New York as a vibrant, world-class city that never sleeps, with the needs of those who live in, work in, and visit the city.”

The Barclays Center has not yet returned The Observer’s request for comment.

The Atlantic Yards Watch, a community-based blog that reports on the neighborhood impacts of the Barclays Center and construction from the Atlantic Yards project, cited several texts and phone calls made to 311 on Sunday night reporting excessive noise during Rihanna’s concert. Prospect Heights residents were outraged that the noise pollution continues, despite the fines. The Atlantic Yards Watch provided the following transcripts from the calls:

“Rihanna is as loud as SHM or Sensations!!”

“YIKES!! Why are they starting so late?”

“Guess they haven’t done anything to minimize the noise!”

“[Past] midnight and they’re still going, when will it end?”

“Why are these noisy types of concerts allowed on Sunday nights?

Peter Krashes, who runs the Atlantic Yards Watch Blog and serves as a member of the Dean Street Block Association and secretary of the Prospect Heights Heights Neighborhood Development Council, said noise complaints have come from east, west and north of the Barclays Center, as far as a block away from the arena.

“The solution is probably structural,” Mr. Krashes told The Observer, citing the original plans for the arena, which were not anticipated to produce noise problems. The original design by architect Frank Gehry was replaced in 2009 by the design from Ellerbe Becket and SHoP Architects.

“For the short term [The Barclays Center] can put stipulations on the contracts of performers to limit noise levels, which it clearly hasn’t done,” Mr. Krashes added.

Mr. Krashes further noted that the DEP will continue to measure the noise level from the Barclays Center, and that the arena is conducting its own inspections.

“We’d like to know to what end they’re working,” Mr. Krashes said of the Barclays Center inspections. “If this was a bar or a restaurant, they could be shut down because it’s illegal.”

The Atlantic Yards Report noted last week that the fine may not be enough to solve the problem.

“For a neighborhood bar, a $3,200 fine for a noise violation can cause pocketbook pain. For an arena earning millions from concert tickets and concessions, it may be the cost of doing business, especially if they can fend off some fines with procedural arguments,” blogger Norman Oder wrote.

Several residential buildings will be constructed next to the Barclays Center as part of the Atlantic Yards project in the coming years.

“I think a lot of people are assuming they’re going to solve this problem by the time they build the residential buildings adjacent to the arena,” Mr. Krashes said. “But are we to wait two years for them to fix this?” 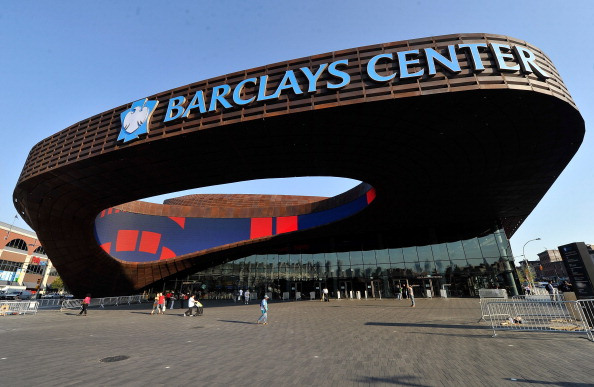