The United States pavilion at the Venice Biennale desperately needed an artist to shake things up. This year Sarah Sze has accomplished that task, turning the pavilion on its side with a delicate and complex series of installations that transform it from a venue for the heroic display of art to a laboratory for art’s creation.

Artists have a tough time with the stern neo-Palladian architecture of the U.S. pavilion, which demands some kind of aesthetic rejoinder. Ed Ruscha’s “Course of Empire” paintings in 2005 provided wry and elegant commentary. But last year’s display, from Allora & Calzadilla, bludgeoned viewers, with the Statue of Liberty in a tanning bed, an ATM that made loud sounds upon withdrawal of cash and a military tank that doubled as a treadmill. (A cast of Olympic gymnasts was the punch line to this very tedious joke.) Ms. Sze has taken a different, more effective tack: rather than compete with the pavilion, she has fiddled with it.

Part of Ms. Sze’s success here is due to the nature of her practice. From zany, sometimes twee networks of quotidian materials, she creates meandering installations that infiltrate the architecture of spaces. Not in a violent way, more in a sneaky, mischievous way. They look as though mice have made them. And that’s just what the pavilion needed after a series of grand statements. Her art, especially here, is less about the finished product than it is about process (the exhibition is called “Triple Point,” after a substance, like , that can exist in three forms: solid, liquid and gas), a quality that could be ascribed to the nature of nationality these days, when so many are in the process of becoming American or, having joined the ranks of the globetrotting one percent, belong more to a roving elite than to any given nation.

One begins the tour of her presentation with a set of real rocks, ones that have long sat in the pavilion’s front yard, and are half submerged in the gravel there. Several feet on from those are “rocks” that Ms. Sze has constructed by covering sculptural material in packing paper patterned with a remarkably realistic rock surface, complete with images of lichens. (Shades of Vija Celmins.) These rocks, as well as other materials—vices, tape, moss, bottles, terrariums—form a mobile-like sculpture that climbs the front entrance of the pavilion like vines.

Ms. Sze has relocated the entrance of the pavilion from the center of the building to its side; rather than make a grand entry into a rational space with a rational approach, visitors are made to feel as though they are sneaking in. Already, things are off-kilter. On the floor of the first room, she has recreated, with black tape, the compass rose that is etched into the floor of what is usually the entrance room, in effect shifting the pavilion’s center of gravity. Atop this faux compass rose she has placed a sprawling installation evocative of a planetarium’s model of the firmament, a kooky kind of observatory composed of snapshots of landscapes, cards for testing color blindness (one of them resting atop toothpick stilts), blue plastic bottle caps, vise grips, paper-cutting blades, paint cans, tree branches sprouting from green industrial clips to form a sphere, notebook pages sprinkled with blue electrical tape, small stones painted in shiny red enamel, a dandelion dangling over a paper cup, a pillow slouched over a wooden beam.

In the next room, desk-like structures are supported by uneven, spindly, whittled-down legs, like wounded soldiers. On their surfaces, under lamps, rest tiny vials of colored sand, string-wrapped stones, lengths of fabric, a balled-up sock, a tiny cactus, bottles. The head of one of the lamps is coated in sand, as if some meteorological disaster has interrupted the proceedings here. An industrial ladder looms, one of its legs chopped off midway. More vials, these of black sand, and a pair of Adidas sneakers perch on its steps like pigeons. On the floor, blue masking tape surrounds piles of sand and bits of yarn, as though they are evidence at the scene of a crime; on a stool behind one of the desks is a rumpled pair of suit pants, as though the genius of the place—the artist as mad scientist? nutty professor?—has disrobed before making a hasty exit.

In the next room, what would usually be the entrance room, a boulder (one of those fake rocks) sits off-center on the floor’s compass rose. A tiny hole has been drilled into the rear wall, and attached by a length of royal blue string to the oculus in the ceiling. It’s a clever touch, equating the scrappy puncture—it gives a view through dust lodged inside the pavilion wall to a brambly backyard—to the grand skylight. (What’s America? Depends where you look.) Further deactivating the building’s grandeur, Ms. Sze has opened a storage closet and made an installation in there, even using supplies left over from previous biennales. Rising in the closet’s corner is a waist-high tower of paint cans and toilet paper rolls, topped with a lamp. On the shelves are bird bone-like plaster casts, toothpicks, tissues, orange juice bottles, rolls of twine, a digital clock—twee taxonomies. One of the best aspects of her project is its use of the pavilion’s marginal spaces—the overgrown backyard, where a row of wooden markers traces a path from that peek-hole toward the Uruguayan pavilion, the closet, even the rooftop, which has sprouted a jerry-rigged weathervane on top of which is precariously balanced what appears to be a giant boulder.

In the fourth room, an arrangement of objects forms an amphitheater in the center of which a pendulum traces an arc, threatening to topple a fragile architecture composed of peppermint tea bags, a ladder, nails, blocks of wood, a stack of books (the 2003 edition of Ward’s Natural Science: Biology and Chemistry, Crafts Supply Sourcebook, a Graingers catalogue), boxes of light bulbs, boxes of Clif Bars, Pringles, Krispy crackers, Parmalat; a bottle of mouthwash, a role of orange tape, stacks of blue jeans, stones, cacti, a spirit level. Near the center, abutting ambiguous white powder, a tiny baby blue packet is emblazoned with a word that seems a key to what Ms. Sze is up to here: Equal.

In the final room are tables bearing the tools of Ms. Sze’s trade: FedEx packing material repurposed for the “rock” surfaces, pine cones, coffee beans, bottles that double as hourglasses. She’s mirrored the walls, producing an infinity effect, and installed a low string grid below the ceiling, an allusion to maps. Prescription bottles and bottles and paint cans, all of them coated in sand, rest on the floor, as does a crumpled sleeping bag (the artist was here?).

With her fake and real rocks and moss, Ms. Sze is interested in how, in the lush environs of the Giardini, the built world (the pavilions) interacts with the natural world. She’s playing with perception, systems of measurement and the methods we employ to make sense of the world. Out in front, she’s constructed a little waterfall, and piped the sound inside—in her laboratory-like environment it could just as well be mysterious chemicals bubbling away on a Bunsen burner.

She’s taken out a wall in the final room and put in a window, making interior continuous with exterior, a pavilion with porous borders. There are astute metaphors for America in here, but they are subtle, as so much art is not these days.

Something here speaks to a particular strain of American tradition, one that eschews grandiose idealism in favor of experimentation—the tradition of the tinkerer Ben Franklin, rather than Thomas Jefferson. Self-made, her pavilion whispers, still becoming, still figuring it all out. 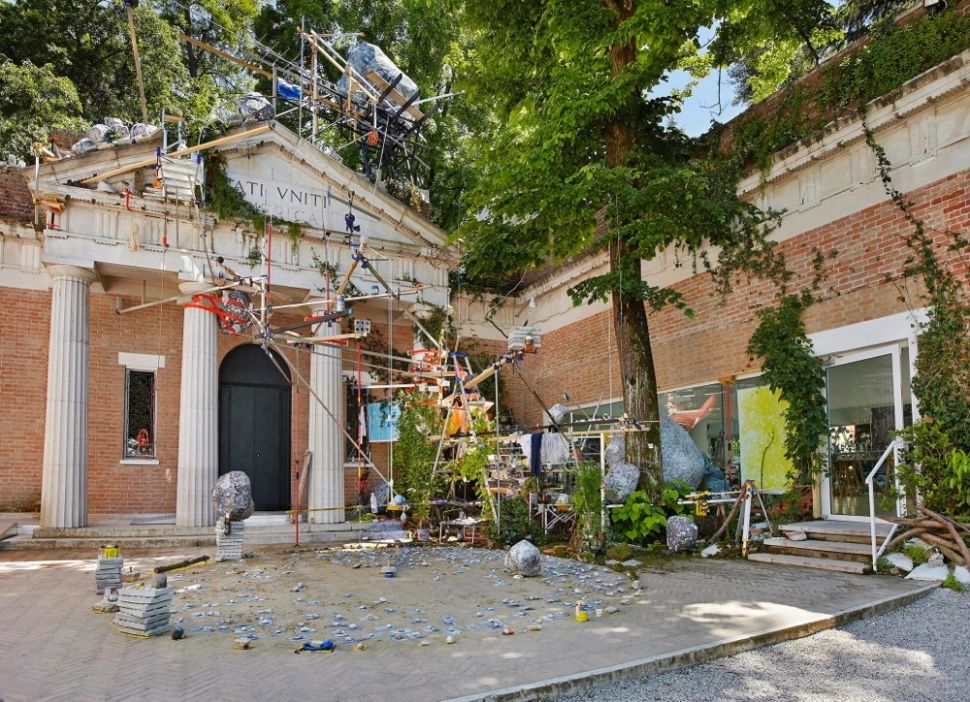