Let’s face it. The Great Gatsby never has been—and probably won’t ever be—successfully turned into a great motion picture. Many have tried (four flop movies, not to mention various small-screen attempts, including a truncated but memorable Playhouse 90 with Robert Ryan and Jeanne Crain in the golden days when TV still knew what quality programming was). Robert Redford was a perfect Gatsby in the pretty but boring 1974 version by Jack Clayton, but the movie was dead on arrival. The best I’ve seen is still Elliott Nugent’s black-and-white 1949 version, with Alan Ladd at the top of his form as the screen’s most glamorous Gatsby to date, heading a cast that included Betty Field, Macdonald Carey, Ruth Hussey and Shelley Winters. Mired in mysterious litigation for six decades, it has never been released on home video, is never shown on any cable or network channel, and cannot be appreciated by the legions of F. Scott Fitzgerald fans who have never seen his work properly adapted to the screen. And so his literary masterwork remains nothing more—an elegant but elusive triumph of words over images, best savored on the written page.

You don’t realize just how much misguided damage can be done to a great novel until it is vaporized by a pretentious hack like boneheaded Australian director Baz Luhrmann. Some critics, through the years, have put forth the unpopular theory that Fitzgerald specialized in style over substance, but as any college English major knows, he was famous for pruning away the clutter. With the cinematic meat cleaver that Mr. Luhrmann wields in one bloated misfire after another (I still haven’t recovered from the nausea-inducing Moulin Rouge), style is all there is left, and in The Great Gatsby it looks alarmingly like clutter. Budgeted between 105 and 127 million dollars, depending on which Hollywood trade journal you read, with every inflated expense aimed at your eyeballs in awkward, totally unnecessary and stomach-churning 3-D, this is one of the most maddening examples of wasted money ever dumped on the screen. Jay Gatsby is an enigmatic figure in the excessive Roaring Twenties who came from poverty and devoted his life to becoming a self-made millionaire to win over a superficial girl named Daisy, buying an ostentatious mansion on Long Island across the lake from her rich husband Tom and infiltrating high society with lavish, loud and impossibly overproduced parties masquerading as social events. Racking up his 3-D budget to the credit-card limit, Mr. Luhrmann turns these dinner dances into drunken confetti-drenched orgies. The sumptuous, vulgar Gatsby estate, overflowing with gangsters, movie stars, flappers, wisecracking alcoholics, voluptuous tap dancers, people falling from trapezes, clowns, acrobats and an orchestra in the middle of a swimming pool full of inflatable rubber zebras, looks like a high-school costume party on prom night invaded by Cirque du Soleil.

Is it any wonder, in all the slobber and confusion, that the acting is so bad? With the phoniest set of performances this side of an Ed Wood flick, you might as well be watching Plan 9 From Outer Space. As the new Gatsby, Leonardo DiCaprio is hopeless, a little boy in his first After Six tuxedo. Worse still, he is no longer the centerpiece of the story, a task that falls into the incapable hands of the incompetent, miscast Tobey Maguire as Jay Gatsby’s friend, neighbor and all-seeing matchmaker and Daisy’s cousin, Nick Carraway. He might suffice as a callow Spider-Man, but as the film’s narrator, saying campy things like “They were careless, Tom and Daisy … they smash people and then retreat back into their vast world of money and carelessness …” Even with these masterful lines from the book, he just sounds like he’s reading from a college yearbook. Mr. Maguire is supposed to be the camera through which the tragedy unfolds, but he is light years away from possessing the range, craftsmanship and experience required to play a Fitzgerald hero. Mr. DiCaprio has the experience, and we know he can act, but he’s not beyond the need for a director’s keen guidance. Without proficient direction, he comes off like he has no stamina to give the role of Gatsby the stature it demands. That kind of direction would imply the kind of wisdom and insight Baz Luhrmann lacks. He’s too busy directing the confetti.

Carey Mulligan is another artist who knows how to pop the cork on bottled emotion, but her Daisy Buchanan is so trite and myopic you wonder what Gatsby ever saw in her in the first place. Only the terrific Australian actor Joel Edgerton has the proper grip on the material as her handsome, shallow, two-timing husband Tom. It’s supposed to be a story about fate and irony, but the jealous garage mechanic Wilson and his sluttish wife Myrtle (so soundly and wrenchingly played by Shelley Winters in the 1949 version), who gets mowed down by Gatsby’s Duesenberg, have been all but relegated to bit players. This dilutes the dramatic impact that builds to the story’s feverish climax, rendering the big finale impotent. This version of The Great Gatsby has the narrative strength of tap .

Like Orson Welles, Mr. Luhrmann chooses interesting material to shape into movies, but then his colossal ego does ridiculous things to doom it. This catastrophe has actors who roll their eyes and raise their eyebrows in perpetual uncertainty about what kind of literature they are supposed to be interpreting—a trashed-up revision of the original with the narrator now echoing the inner voice of Fitzgerald from an asylum where he is writing a book called … The Great Gatsby? The jazz and big band swing of the ’20s has been replaced by hip-hop music supervised by Jay-Z and songs by Beyoncé and Fergie with the historical significance of a tuning fork, and there are so many close-ups that it sometimes looks like a movie about ears. I love the publicity quotes by Baz Luhrmann stating that his intention was to make an epic romantic vision that is enormous. Also: overwrought, asinine, exaggerated and boring. But in the end, about as romantic as a pet rock. 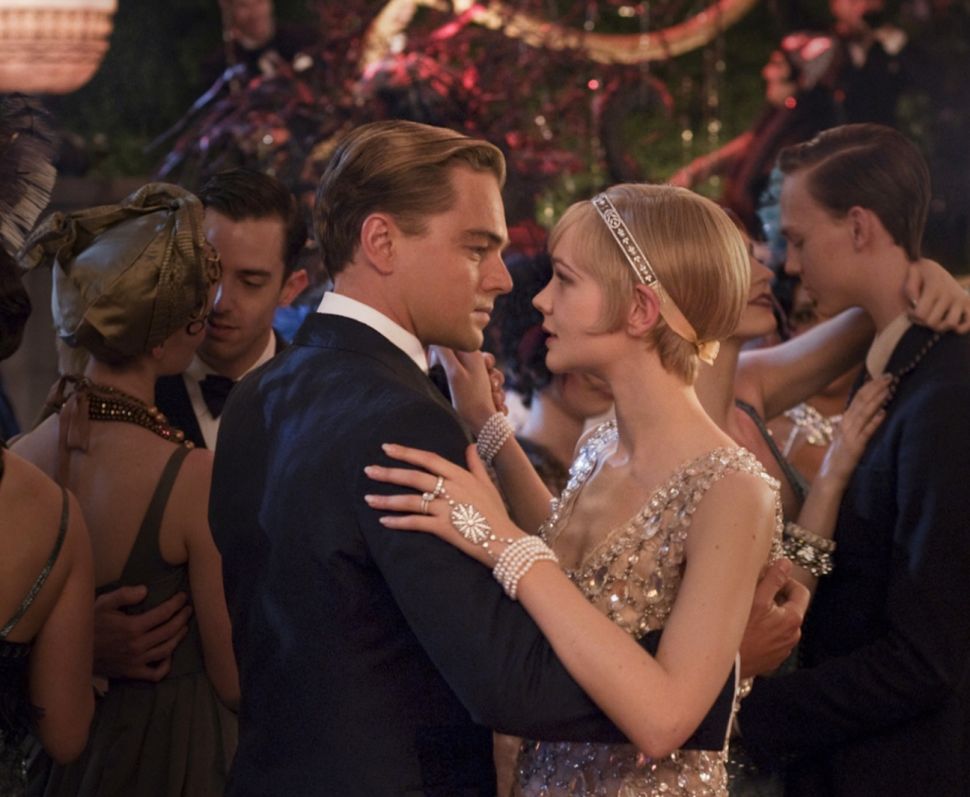