Just kidding. They apologized for his ridiculous comments about “cool” kids.

“We sincerely regret and apologize for any offense caused by the comments we have made in the past which are contrary to (the values of diversity and inclusion)” a statement released read. “We look forward to continuing this dialogue and taking concrete steps to demonstrate our commitment to anti-bullying in addition to our ongoing support of diversity and inclusion.”

The suspiciously blond 68-year-old incited an online riot with his comments about the company’s clientele earlier this month.

“In every school there are the cool and popular kids, and then there are the not-so-cool kids. Candidly, we go after the cool kids,” the oh-so-attractive executive said. “We go after the attractive all-American kid with a great attitude and a lot of friends. A lot of people don’t belong (in our clothes), and they can’t belong.”

The company finally balked after a Change.org petition that garnered 68,000 signatures. 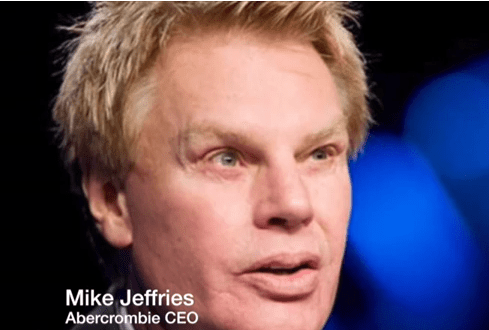