Remember that nearly life-ending revelation that the photos sent from Android devices on Snapchat don’t disappear? As in, they sit in some not-so-discreet folder called “RECEIVED_IMAGES_SNAPS,” where they’re just waiting to be shown to the world. Well, a privacy watchdog is taking action for you by filing a complaint with the government in an effort to stop the nuisance.

On Friday, the Electronic Privacy Information Center (EPIC) filed a complaint with the Federal Trade Commission. The 8-page document lambastes the California-based app for its “deceptive business practices,” since it claims the photos are deleted when in many cases they are not. In Snapchat’s privacy statement, it does hedge that it “cannot guarantee that the message contents will be deleted in every case.”

EPIC writes that the app’s loophole is in FTC’s purview of cracking down on businesses that operate with “unfair and deceptive acts and practices.” The Washington, D.C.-based activist group writes:

The Commission should require Snapchat to improve its data security practices, and specifically to ensure that photos and videos are in fact deleted such that they cannot subsequently be obtained by others.

Mary Ritti, Snapchat’s vice president of communications, told the Los Angeles Times that there’s always been ways to capture a snap (i.e. screenshots, or angling another camera toward the snap). She said the company does “not intend to make any further comment about this complaint.” 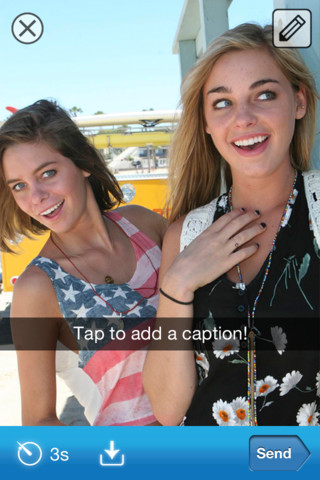