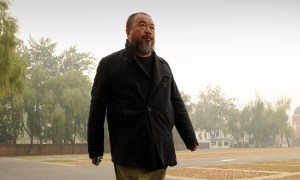 Art in America‘s Brian Boucher just revealed that dealer and Duchamp expert Francis Naumann recently taught Ai Weiwei how to play chess at his Beijing studio, and Mr. Boucher has the photo to prove it.

Sort of hard to believe that the ever-wily, strategy-minded Mr. Ai didn’t know how to play chess before, right?

The whole thing was a long time in coming. Here’s Mr. Naumann:

“The idea arose several years ago, when we first met at Art Basel Miami Beach, and again when we met in Belgium a few years later…The lesson was scheduled for March of last year—when his series of Zodiac heads were shown in front of the Plaza Hotel in New York—but by then he had famously been arrested, and was still in detention.”

Read the whole story at AiA.