Despite Democrats’ best efforts to finish one another off in an intra-party ground war, the Christie strategy against state Sen. Barbara Buono (D-18) remains firmly in place: employ a shock and awe air war to disable the Democrat’s campaign before she can amass money for the fall.

“She just wasted a million dollars,” Murray said of Buono’s cable and network television ad buy. “People won’t watch it. They’re not going to remember it.”

Christie’s artillery forced Buono to pull the trigger on an ad when she should be stockpiling cash for a contest in which the nationally-well connected Christie will have a decided financial edge, the political scientist said.

To be fair, ELEC rules require Buono to spend the publicly matched money now, in the primary, Buono’s allies pointed out.

To date, the incumbent Republican governor has raised $6.2 million to Buono’s $1.7 million.

“This was a game of chicken and she blinked,” said Murray. “Christie applied the pressure for her to waste her money now.”

A Buono supporter argued that the rules says she must spend $1.2 million in the primary, where else was she going to spend it?

“Our campaign is following through on its plan to introduce Barbara Buono to voters as a champion of New Jersey’s working and middle class,” said Buono Campaign Spokesman David Turner. “We are going on television because that is by far the best medium to reach as much of the electorate as possible. Her story of growing up in a working class family to become the state’s first female majority leader. It resonates with with New Jerseyans because they know she understands their struggle.

“With 400,000 people looking for work, property taxes up three times as much as the three years before he took office, it’s no surprise that he feels like he has to spend money falsely attacking Senator Buono’s record in May,” he added.

Mired in a leadership fight over state committee chairman, the Buono campaign said she will go up on the air this week with a $1 million ad buy focusing on New Jersey’s 400,000 unemployed residents and homeowners beset by high property taxes, presenting the Democratic candidate as an empathetic leader from a hard knock background.

Christie yesterday dropped his own second negative television ad against Buono, part of a $950,000 media buy.

The ad ties Buono to former Gov. Jon Corzine, laying into her for chairing the Senate Budget Committee under the ejected Democrat, while on third reference mangling the candidate’s name on the same week she released a web ad specifying how to pronounce “Buono.”

“I would have run a purely positive campaign,” Christie told reporters outside the Manville Diner, citing the barrage of TV spots initiated by One New Jersey, a pro public worker organization, which has berated the governor for initiating policies that have worsened a moribund economy.

“Special interest groups are attacking my record…. I’m not going to be a heavy bag,” Christie said. “They started the fight but I’ll finish it.”

“She does not have enough money to move the needle,” he said, referring to Buono’s 30-point deficit in most polls. “The poll numbers will move because of a natural decline from the huge superhuman highs the governor enjoyed during Sandy and its aftermath. They have been coming down since March.”

But they won’t plummet unless Christie makes a mistake, Murray added.

Part of Buono’s challenge he said, is to raise desperately needed funds at the national level, she needs to hit progressive values issues, like marriage equality, abortion and global warming.

“Wake up,” Buono urged the governor this week when she learned of his comments in Lavallette doubting the connection between climate change and the hurricane.

But New Jersey voters want to hear about property taxes, the area where Christie is most vulnerable, according to Murray’s polling.

Veteran Democratic Party operative Paul Swibinski said he sees a chance for Christie to weaken himself by being too aggressive early.

“I was very surprised to see the governor go so negative so hard,” Swibinski said. “It seems he’s going negative on her and when you’re planning a negative campaign, you save your strongest stuff for the end. He’s running straight negative and comparative ads now.

“It’s a really heavy-handed assault on Barbara Buono that very frankly surprises me,” he added. “It reminds me of the old bully nobody liked rather than the Hurricane Sandy version of the governor with his arm around Obama. I’m surprised by the nasty imagery making her look unattractive in the ads. That has a tremendous backfire potential.”

For the moment, though, Christie does not appear too concerned about a boomerang effect.

He has the advantage of Democrats fighting Democrats over Buono’s choice for state party chair: Assemblyman Jason O’Donnell (D-31), who joined a band of renegades in 2011 to try to oust Speaker Sheila Oliver (D-34).

Oliver is cool to his chairmanship, according to sources around the Essex County leader.

In the end, it’s a fight over a familiar subject.

“That battle is about control over the campaign funds,” Murray said. “Does the state committee’s money go to Barbara Buono or does it go to the legislative districts? It’s all about the money and legislators are worried about a Chris Christie landslide.”

Murray said given the fractures within the party, Buono made the move she had to when she enlisted a loyalist like O’Donnell.

“These guys (party leaders like Sweeney and Essex County Executive Joe DiVincenzo) have given Barbara Buono no reason for her to trust them,” the political scientist said. “It made no sense for her to reach out to them for a compromise candidate.”

This week, as she prepared to launch her television ad, Buono went to Trenton, and huddled up with state Sen. Linda Greenstein (D-14) and state Sen. Shirley Turner (D-15), who both represent districts heavily populated by public sector workers. It was an American Federation of Teachers crowd that gave the gubernatorial candidate a positive reception.

She blamed Christie for scapegoating public workers for the state’s fiscal woes and protecting millionaires, and for not fully funding public pensions, while Christie laid on another round tying Buono to the Democratic incumbent governor he beat in 2009, and sniped the endorsement of a Democratic council president in Paterson, who grew up in public housing. 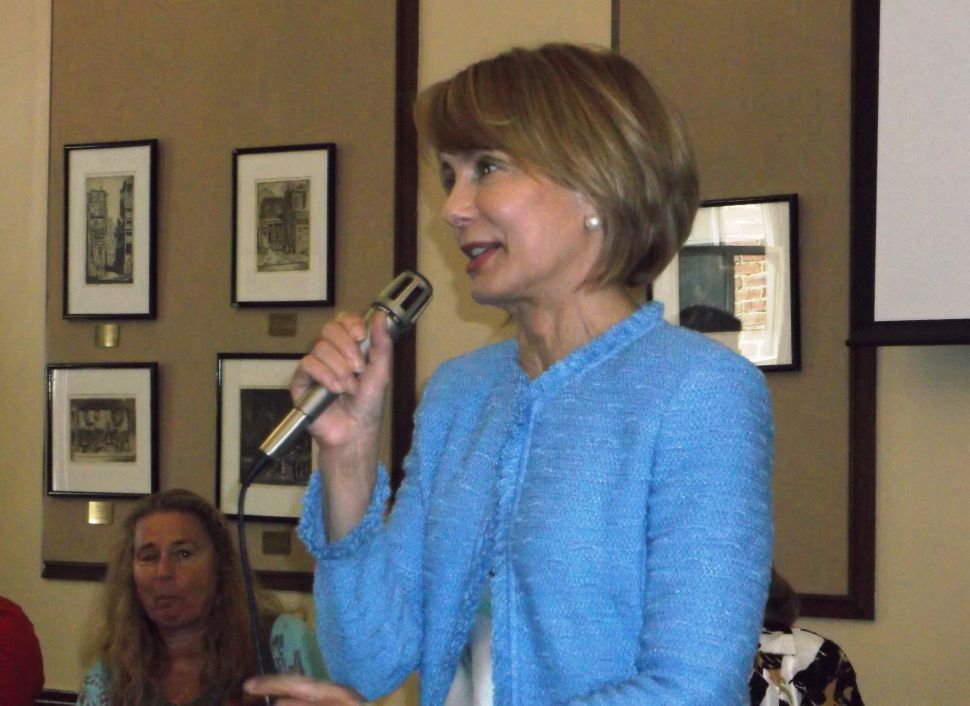