On my visit to the restaurant, he was busy in the kitchen, along with executive chef Jon Bignelli and sous-chef Ryan Henderson. The room felt breezily rustic but not slavishly so, like a farmhouse owned by Manhattanites that you’d see in Architectural Digest. Over speakers, hidden by slats of reclaimed wood on the ceiling of the dark room, Pavement played. Stephen Malkmus sang, “Ex-magician / That still knows the tricks / Tricks are everything to me.”

Written quotation marks should be used solely for attribution and not in the “air quotes” sense. But I’ll make an exception for Mr. Dufresne, because at Alder, without fail, the answer is that they are more delicious, more inventive, more mind-blowing than their original, impoverished, traditional selves.

The “pigs in a blanket” ($11) seem, on first inspection, to be standard bar mitzvah fare. Sections of dough-wrapped wieners are served on a slate dotted with artistic squirts of mustard and what looks like duck sauce. (Weirdly, neither the slate nor the artistic dots seem cliché, but maybe that’s because Mr. Dufresne was their progenitor.) But inspect closer and taste: erstwhile kosher beef is Chinese sausage; puff pastry is Pepperidge Farm hot dog bun run through a pasta machine, turned into a sort of bready fruit-leather. That mustard, laced with wasabi, is less Citi Field and more Ajinomoto Stadium. And that duck sauce is a sweet chili sauce.

Anyone who has partaken of Chinese sausage does not need an explanation. For those who have yet to do so: eating these pigs was like seeing an old friend from high school who had lost a lot of weight and now dresses well. You can still recognize them; they are just better now. It’s a sweet and piquant moment.

The menu is full of makeovers like that. The Caesar salad, the golden retriever of restaurants (friendly, good with kids, dumb), is smartly redone as Caesar nigiri ($15). Romaine, spine intact, is the canoe, laden with parmesan and egg yolk as neta. It renders faithfully unto Caesar but does so imaginatively. A plain old New England clam chowder—Mr. Dufresne was born in Rhode Island—isn’t meddled with much, save a squirt of parsley oil, a nod to Mr. Dufresne’s days at Jean-Georges. But the creamy clammy potato soup would make even the saltiest dog proud, and the “oyster crackers” that accompany it: oh my. They are actually dehydrated oysters, pureed, turned into a dough and fried. At Alder, the oyster crackers aren’t crackers that look like oysters. They are the oyster.

Mr. Dufresne’s approach isn’t based on mere wordplay, though (as so much of mine, sadly, is). It’s just really smart and really fun food. Everything I ate and everything I drank had either a turn or an expert touch or a surprise—often all three. A discus of foie gras terrine ($18) looked like a technicolor Egg McMuffin. The foie gras was tucked inside a poached apple, sat atop chartreuse yogurt and an English muffin, and tasted of fall orchards and breakfast. A slab of caramelized cauliflower, the Bob Hoskins of vegetables, was paired with a Mangalitsa lardo—made specially for Alder—and cacao nibs. It was a nutty, salty, bittersweet Blooming Onion for foodies.

Mr. Dufresne is also a neighborhood boy. He grew up in the East Village and went to Friends Seminary in Gramercy. The rye pasta ($18), served over a slice of pastrami, is a holla back to the neighborhood delicatessens of his youth (even though Mr. Dufresne said he is a Katz’s man himself). It tastes like a sandwich, looks like a pasta and embodies the best of what Alder does. It makes you smile.

The grease traps of New York kitchens are, of course, cluttered with chefs with great senses of humor, boundless ambition and unique points of view. Alas, many lack the technique to execute. And though Tragedy + Time = Comedy, Comedy – Technique = Tragedy.

Alder benefits from Mr. Dufresne’s longtime commitment to experimentation and innovation at wd~50, which has turned out to be an incubator for many of the techniques on display at his new restaurant. Over the past decade, Mr. Dufresne and his team perfected crackerizing things, yogurting things and pastasizing things. He has, he mentioned to me in passing, “a spaetzle playbook.”

It could be a line from The Far Side, but in Mr. Dufresne’s expert hands—as in Gary Larson’s—it’s a great joke in good taste. 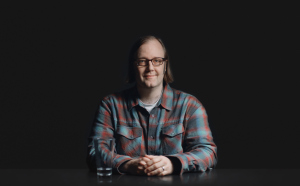