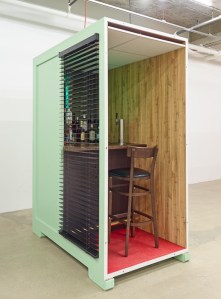 ‘Siegfrid’s’ (2013) by Alex Hubbard. (Courtesy the artist and Maccarone)

The hints of melancholia and breezy bathos that have long made Alex Hubbard’s work so interesting are strongly present in his newest pieces, called “one-person portable drinking bars.” These five Kienholz-worthy stalls are each about the size of two phone booths and stocked with alcohol, complete with a working beer tap. You can saddle up to the bar with its lone chair, pour a drink and enjoy it while staring at yourself in a mirror. It’s playful and humorous—until it gets lonely. Whatever Mr. Hubbard means to get at with these boîtes—the inherently solitary nature of looking at art?—this show, his sophomore outing at Maccarone, has him bringing his typically inventive, light touch to a variety of mediums, and continuing to eschew a signature style, a refreshing stance in a city that all but demands its artists adopt a recognizable brand.

“Bent Paintings,” a recent series of large, thin flexible urethane molds of various little cosmetic bottle-sized objects and the surface they sit upon come in a variety of colors—mandarin, raspberry, lilac and gray—and are flopped over, crumbled up on the ground or hung daintily from the walls. They’re goofball riffs on Daniel Spoerri’s food-strewn tables from the 1960s or maybe even Matthew Barney’s overwrought assemblages. They’re paintings as barely-there objects, unfixed and unstable, as happy on the ground as the wall. 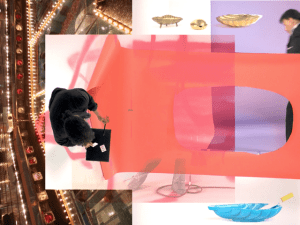 The real highlight, especially for those fondly recalling Mr. Hubbard’s contribution to the 2010 Whitney Biennial, is a 6-minute video, Hit Wave II (2013), which also maneuvers in painterly realms. It’s made from a number of separate scenes, shot at different angles, which are pieced together into a beguiling collage. Mr. Hubbard appears in the video in a full-body painting suit as he rolls out sheets of primary colored paper, cuts them and sprays paint about. Process and product align. As he wields his tools, a man in a suit, the magician Magical Ramón, stands nearby, performing his own sleights of hand with a deck of cards and a top hat. In a voiceover, Mr. Ramón describes the tricks of his trade. “These guys are doing this every day,” he says, “trying to get your money.” Don’t get hustled, in other words. In a world filled with imitators, Mr. Hubbard has the real touch. (June 1, 2013)