“The Morgenthau Plan” was an American proposal, first mooted in 1944, to partition and deindustrialize Germany after the war. It was never enacted precisely as planned, of course, but while the war was still going on, Joseph Goebbels was able to use news of the idea to rally resistance along the Western Front. “The Morgenthau Plan” is also the title of an installation that Anselm Kiefer showed at Gagosian’s new space in Le Bourget, Paris, last year, of his current show at Gagosian in Chelsea, and of several of the massive, oil-and-acrylic-on-photo-on-canvas tableaux in the show. 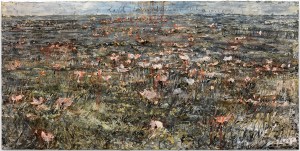 The plan could certainly be the fertile premise for a robust conceptual engagement with—just to pick from ideas cited in the show’s press release—unintended consequences, industrialism, tyranny and social reorganization, or the sinister inadequacy of mere beauty as an artistic goal. But despite the repetitive insistence of the title, written directly on several canvases as well as on the gallery wall, Mr. Kiefer hasn’t quite gotten there yet—which is too bad, because his paintings hardly need any corpus of explanation in the first place. (Maybe “The Morgenthau Plan” is not a depiction but a demonstration of the dangerous inadequacy of verbal ideas.) One der Morgenthau Plan, for example, comprising three canvases fit tightly together, is just under 10 by 20 feet. Each is covered with a close-up, out-of-focus color photo of a field of flowers, and each photo is almost entirely covered with paint. In the upper half of the composition, translucent layers of gray and blue, thick cracks, drips and stains create a sky of misty, fantastic depth. Tilting across that sky are a dozen ovals, thick knots of paint in charred-bone color that are either blossoms from up close or airships from far away. They blow over on black stems or trail down lines of black smoke into the riot of shockwave strokes and nocturnally floral colors that cover the paintings’ lower half. The raw intensity of abstraction is fit into the direct clarity of figuration: dollops of white paint with black hearts have yellow-orange accents, vague little areas of royal blue float without anchor, and algae-colored stains on the bottom are more like the misremembered synthesis of a meadow than like any one thing you’d ever see. (Through June 8, 2013)