Back in November, the New York Times noted this year’s mayoral race is historically significant because it lacked a Jewish candidate.

“The likelihood that no major Jewish candidate may seek to run for mayor is also the consequence of the extraordinary undoing of the political career of a man who could very well have been the Democratic front-runner at this point,” the paper argued. “Anthony D. Weiner.”

In the wee hours of Wednesday morning that Mr. Weiner announced his return to the race, however, and this dynamic suddenly changed. But can Mr. Weiner, still politically haunted by his lewd Twitter scandal from two years ago, build support in the city’s sizable Jewish vote? After all, socially conservative constituencies, including Orthodox Jews, could be extremely turned off by the salacious nature of his downfall.

“Likud Jews, as I call them, they are conservative hawks on issues like Israel–Weiner was very popular with them,” Jerry Skurnik, a veteran political consultant who focuses extensively on the city’s demographics, told Politicker. “Jews are a big segment of the vote. It’s not like the old days, when they would be 40 percent in a primary, but they’re still a significant vote. The question is, does Weiner have too much baggage? The fact that he’s Jewish does help.”

Mr. Weiner’s old 9th Congressional district roped in a remarkably diverse swath of Jewish voters, allowing Mr. Weiner, a legislator known more for his obsessive dedication to constituent issues rather than accomplishments in Washington, to forge ties with secular, Russian and varying degrees of conservative and Orthodox Jews in southern Brooklyn and central Queens. Representing these Jewish enclaves, he built a reputation as an ardent supporter of Israel, synagogues, yeshivas and various Jewish cultural programs.

Political consultant Jeff Leb argued Orthodox voters can even be forgiving of Mr. Weiner if he makes an earnest effort to reach out to their communities and show he is still invested in the issues that concern them most.

“I think that Anthony had a very strong base in the Jewish community prior to his unfortunate incident,” Mr. Leb said. “The Jewish community could definitely be open to forgiving Anthony, provided he’s open and explains himself and apologizes.”

Others speculated Mr. Weiner’s high-profile marriage to a Muslim could hurt him among some voters as interfaith marriages, like same-sex ones, are taboo among many Orthodox Jews. Ironically, it is Ms. Abedin’s own credibility and refusal to abandon Mr. Weiner that is viewed by some political pundits as one of Mr. Weiner’s few assets as he attempts to win over the general electorate.

“I think it hurt him when he ran for Congress, but it’s not a deal breaker,” said Michael Fragin, an Orthodox Jewish consultant and host of the political talk show Spin Class. “Weiner will definitely force other candidates to challenge their assumptions of where they can win over Jewish voters, whether it’s the Upper West Side, central or eastern Queens, areas of Brooklyn heavily Orthodox or not Orthodox, like Sheepshead Bay.”

Mr. Weiner’s candidacy, at the minimum, seems likely to force his rivals–some of whom, including Public Advocate Bill de Blasio and 2009 nominee Bill Thompson, that have their own bases in the Jewish vote in areas far outside of Mr. Weiner’s old congressional district–to adjust their outreach or tactics as they vie for a coalition that leads them straight into City Hall. 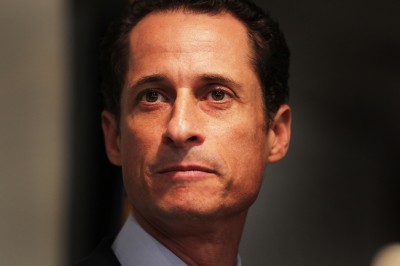