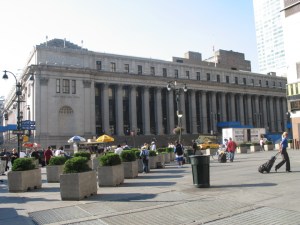 Currently inside the Farley Post Office on Eighth Avenue, up a rather dank staircase near the rows of P.O. boxes, in a corner of the building that has been unused for decades, among the stained carpets, exposed wiring and peeling wallpaper, there is a very trendy group show, curated by the art critic David Rimanelli and presented by Vito Schnabel. The show is open until June 4, and it’s the last time the space will be open before the building is renovated to become part of the new Penn Station.

Named after the American Psychiatric Association’s Diagnostic and Statistical 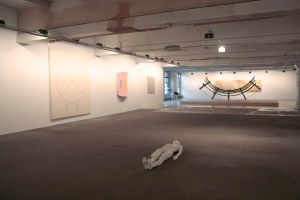 Manual of Mental Disorders (“DSM-V”), it was hard to ignore certain suggestions of one’s mental state. (The fifth revision of the DSM will be released this month, offering a new take on our general definition of insanity and melancholy, with a variety of new disorders and some old ones taken out.) There were flickering fluorescent lights illuminating Dan Colen’s sculpture of a park bench, curved upward into what looked undeniably like a smile. In a darkened corner, a flatscreen played a video by Bjarnee Melgaard, featuring quick cuts of the artist posing in a bright red suit and a perpetual heavy frown. In the bank vault, Oscar Tuazon constructed a crooked wooden sculpture, with a glistening chain attaching it to the wall, bringing out some of the room’s more, uh, quirky charms. 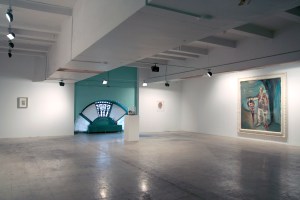 Meanwhile, the artist Betty Tompkins was standing next to her painting of very hardcore (and extremely close-up) vaginal penetration, the colors of which—white and black and gray mostly—really blended in with the various ambiguous splotches of discoloration on the carpet. She was smiling sweetly while her husband took her picture.

“It’s the first time it’s being shown,” she said excitedly. “I think it looks really nice in here.”

In the back room, which had a nauseating teal paint job on the walls and an old arched window—with one broken panel and rusted accoutrements—there was a Picasso, a Sean Landers painting that mocked Picasso and a large canvas featuring a figure holding the bloody, decapitated head of Julian Schnabel. Of course, Julian Schnabel walked in the room, accompanied by his pregnant girlfriend May Anderson. Almost immediately, someone went up to him and asked to take his picture in front of the painting. He let out a sigh.

“How about I just stand here and you take the picture and I’ll talk to this guy,” he said.

Asked who made the painting of his decollation, Mr. Schnabel said, “I did. I painted it. Are you fucking kidding me?”

Later, Mr. Rimanelli, the curator, was discussing the etymology of the word “nice” with the artist Rashid Johnson, how in the 13th century “nice” signified “foolish” and “stupid,” and how its meaning changed significantly over time.