“The philosophical divide between Governor Christie and President Obama is as wide as the Grand Canyon,” said O’Donnell (pictured), gubernatorial candidate Barbara Buono’s choice to lead the Democratic State Committee. “Whether it is climate change, marriage equality, reducing gun violence, pay equity, a woman’s right to choose, or making millionaires pay their fair share, Governor Christie sides with the far right in an attempt to impress extreme Republicans in the cornfields of Iowa.

“Frankly, Governor Christie has attacked President Obama at every turn and has been very clear that he disagrees with the President 95 percent of the time, but he shows up for the photo op,” the assemblyman added. “While Senator Buono is out fighting for Democratic values and New Jersey’s middle class, it is increasingly apparent each day that Chris Christie is focused on his national ambitions.”

Buono and her allies were particulalry irritated by Christie’s refusal last week to identify climate change as a contributor to Hurricane Sandy. 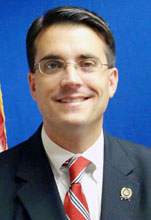