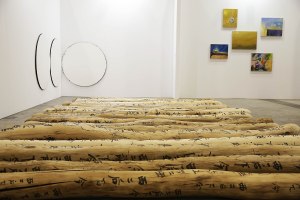 “We are really an Asian gallery,” said Pace President Arne Glimcher on Wednesday evening at the opening of the very first edition of Art Basel Hong Kong, at the Hong Kong Convention Centre on Victoria Harbour. Pace may be based in New York, but the gallery has run a Beijing outpost for the past five years, and that counts as a major plus at an art fair like this one, where dealers compete to make an impact in a burgeoning Asian market.

Technically, this fair has been taking place annually at the convention center for the past six years, bearing the name Art HK. But two years ago it was purchased by MCH Group, owner of the 43-year-old Art Basel, the world’s most prominent modern and contemporary art fair, and that fair’s wildly successful, 11-year-old sister event, Art Basel Miami Beach. This year’s edition, which runs through May 26, is the first under its new Swiss management, and although the morning of the opening on Wednesday brought torrential rains, the weather cleared up by the afternoon and collectors, sometimes accompanied by art advisors in stiletto heels, streamed in to tour the booths of 245 dealers.

Certain improvements could be immediately felt, such as the floor plan, which is more open and spacious, and gives the lion’s share of space to blue-chip international dealers and major players from Japan, Korea and mainland China. There are also sections, called “Discoveries” and “Insights,” devoted to more recently established Asian galleries showing younger artists. The new management promised a boost in European and American collectors at the fair, and though a few could be spotted in the crowd on the VIP preview day, including Miami’s Debra and Dennis Scholl as well as the London-based Roman Abramovich and Dasha Zhukova, the heavy hitters at this fair are collectors of Chinese contemporary art like Baron Guy Ullens and Uli Sigg, as well as Asian collectors, like the Indonesian-Chinese businessman Budi Tek, who is building a museum for international contemporary art in Shanghai.

For dealers from the West, a working knowledge of the market in the region comes in handy here. Building on its Asian client base and cultivation of Chinese artists, Pace brought “what we know appeals to Asian collectors,”  as Mr. Glimcher put it, and that strategy met with success early in the day. Pace’s booth was consistently crowded with visitors clamoring for million-dollar examples of work by Chinese artists like Zhang Xiaogang,  Zhang Huan and Li Songsong, whose works have seen soaring sums in the auction houses.  Gagosian Gallery,  whose two-year-old Hong Kong branch had opened a Jean-Michel Basquiat exhibition the evening before (it’s the first major Basquiat exhibition in Hong Kong), was also busy at the fair. Too busy to talk to a reporter, said gallery director Nick Simunovic as he pointed out details of a Damien Hirst piece to a group of Asian collectors. 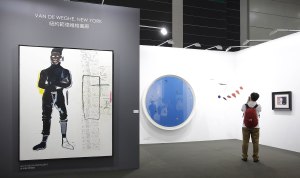 But most New York dealers come to this fair with low expectations. “If I was doing this amount of business anywhere else, I’d shoot myself,”  said Sean Kelly,  who has scored a major coup recently in selling an archive of work by Taiwanese performance artist Tehching Hsieh to Hong Kong’s mega-museum project M+, which isn’t scheduled to open until 2017 but is already spending its sizable acquisition budget.

“This fair you can’t judge in four hours,”  Mr. Kelly continued.  “It’s a much slower affair than that.  People come, they look, they ask questions, they return. So it’s a different rhythm.”

By contrast with other major contemporary art fairs, like New York’s Armory Show and Frieze New York, Frieze in London or Art Basel Miami Beach, Art Basel Hong Kong doesn’t have a collector feeding frenzy on opening day. Here buyers from throughout Asia were much more laid back, taking their time to familiarize themselves with European or American artists whose names were new to them.  One artist every Chinese collector I’ve spoken with has told me that they want is Gerhard Richter—not so surprising, as his market is surging internationally at the moment—and the artist’s agent, Marian Goodman Gallery, which has branches in New York and Paris, managed to sell a photograph on six panels to an Asian collector in the opening hours of the fair. 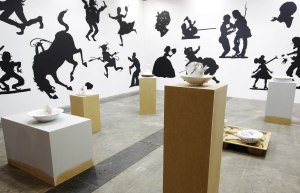 Other New York galleries brought more challenging material. Brent Sikkema spread across two walls of his booth a series of silhouette pieces by Kara Walker, whose work deals specifically with African-American imagery, much of it deriving from the era of Reconstruction after the Civil War. But Mr. Sikkema said he’d found that a surprising number of visitors to his booth were already familiar with Ms. Walker’s work.  (As a kind of insurance, there were also the European visitors that the fair’s organizers had promised him would be on hand.) Like most New York dealers at Art Basel Hong Kong, Mr. Sikkema signed on to the fair with the understanding that patience will be required—it will take some more time before Hong Kong becomes an international art hub along the lines of Basel or Miami.

Hong Kong has, however, come a long way. Six years ago, the city was a sleepy backwater, art-wise, with only a handful of galleries and no major contemporary art museum in the works. At that time it appeared that Beijing—with its 100,000-plus artists and 400 galleries—would be the art capital of Asia, with Shanghai, which had its own burgeoning art fair and gallery district, in second place. But the mainland market faced two major obstacles. First, sales of art in mainland China incur a whopping 34 percent value added tax (VAT), making it almost impossible for foreign dealers to make a profit at mainland art fairs. Another hindrance was government censorship—the Ministry of Culture regularly plucked works out of booths. And hence, the rise of Hong Kong. In no small part due to the success of Art HK,  the Hong Kong government started putting substantial muscle into the local art scene, first and foremost into the massive West Kowloon Cultural District with its $2.8 billion budget and planned M+ museum. That infusion of money and interest attracted Western dealers like White Cube, Gagosian, Emmanuel Perrotin and Lehmann Maupin, all of whom have opened galleries here in the past two years. Meanwhile, Christie’s and Sotheby’s have been holding auctions here since the late-1980s, more aggressively in recent years, and Hong Kong is now the third-largest auction market in the world. 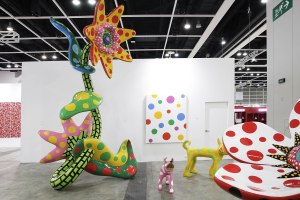 The question for Hong Kong going forward is whether it will function more as a kind of post-colonialist art enterprise, importing Western art into Asia, or as a gateway for Asian buyers to have an impact on the global art dialogue. Ideally, it will do both. The Art Basel organizers have said that they will maintain a 50-50 split between Asian and international galleries—mainland Chinese galleries like Shanghart, Boers-Li, Pekin Fine Arts and Long March Space make a strong showing at this year’s fair—a sign that the fair will continue to have local character. Meanwhile, most galleries from New York and Europe, especially those that do not have a regular presence in the region, are still learning how to tailor their approach to Asian preferences, and to take things slow. “This is about us showing up, showing face, answering questions and taking inquiries seriously,”  said Sean Kelly.  “But it is equally about us learning from their culture. It’s a two-way street.” 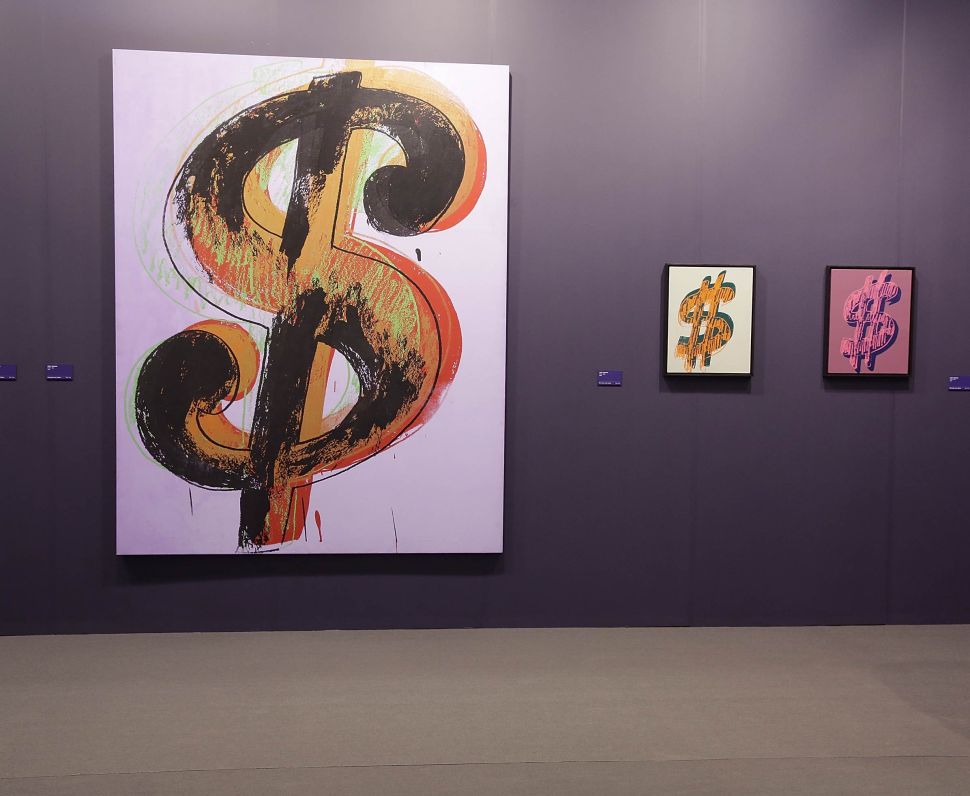 Filed Under: Arts, galleristny in hk