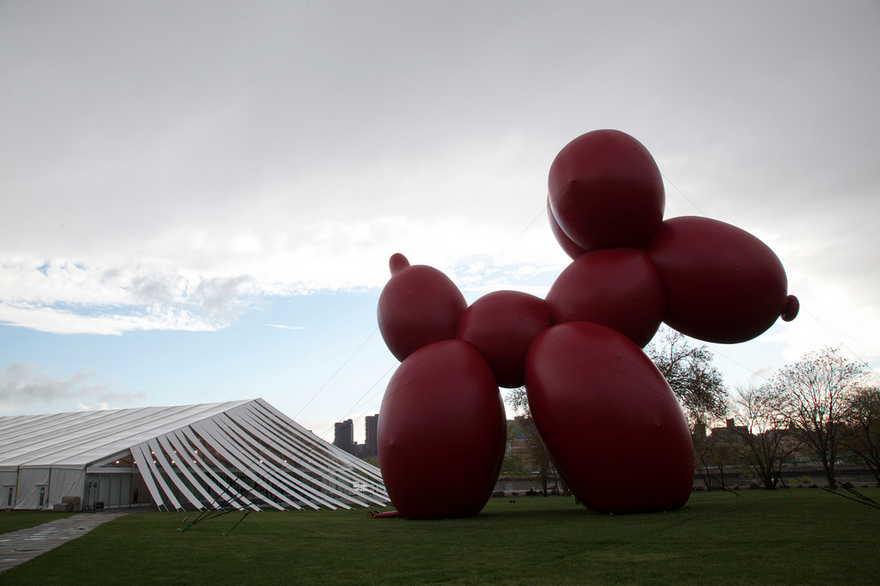 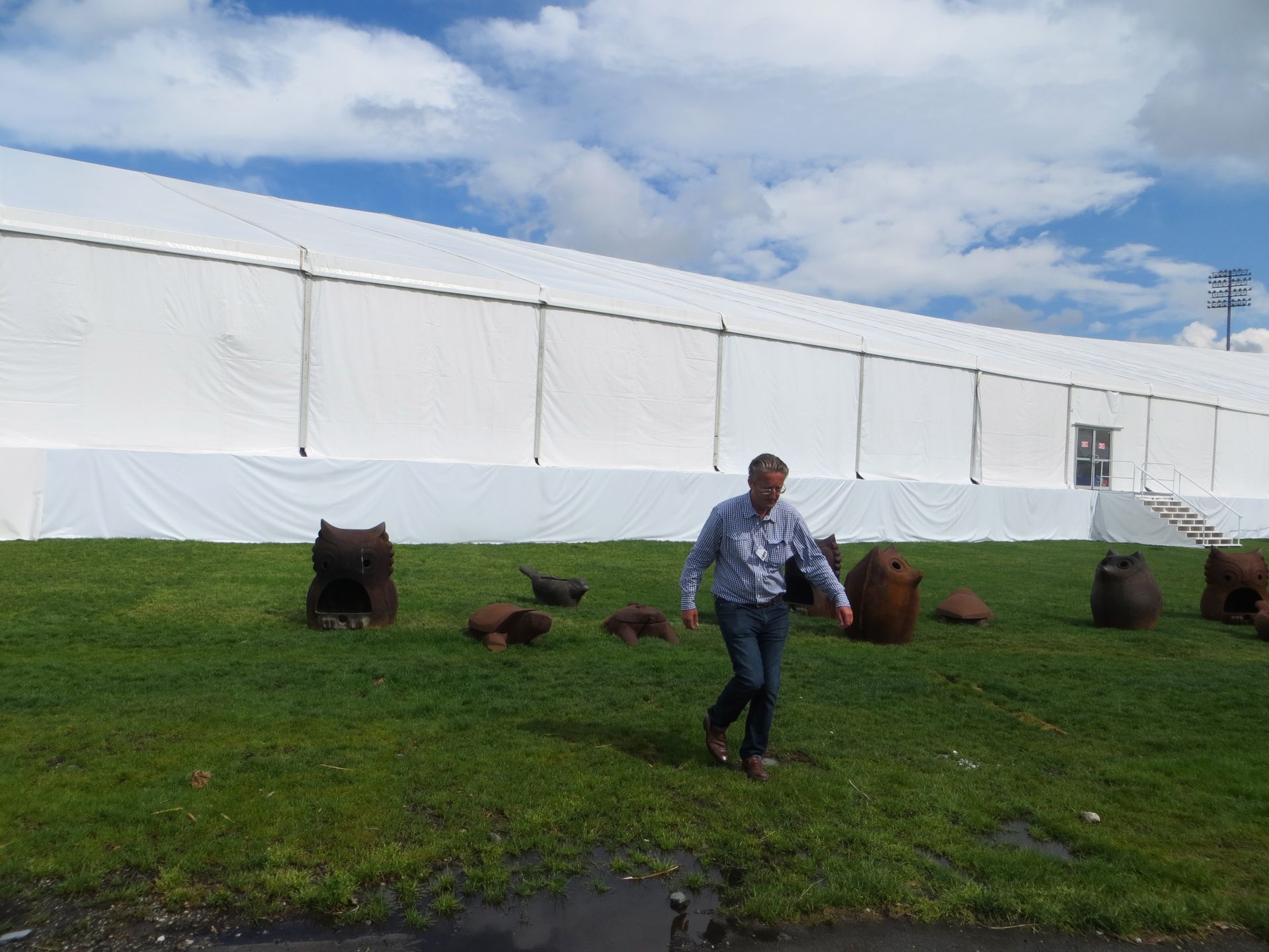 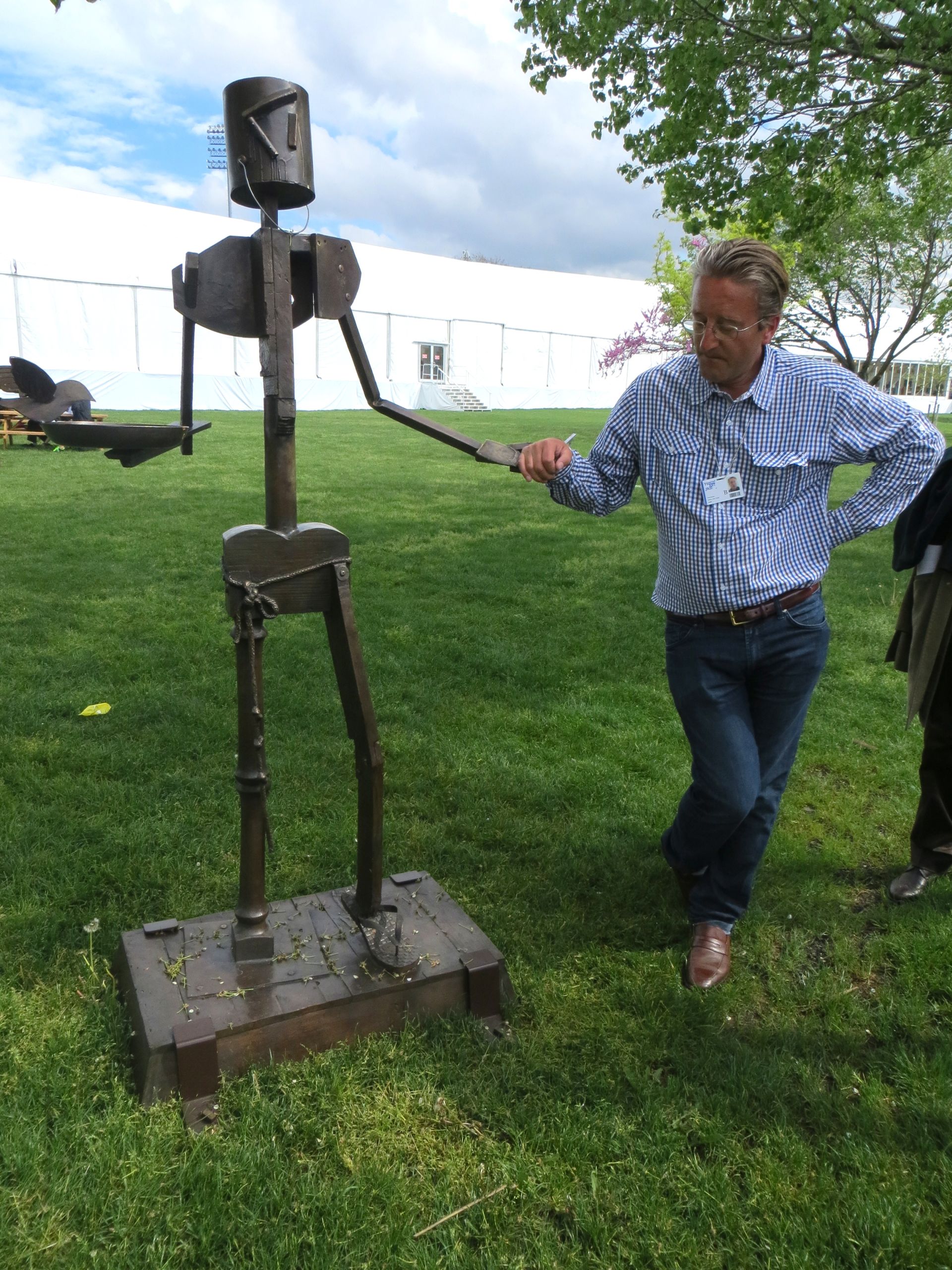 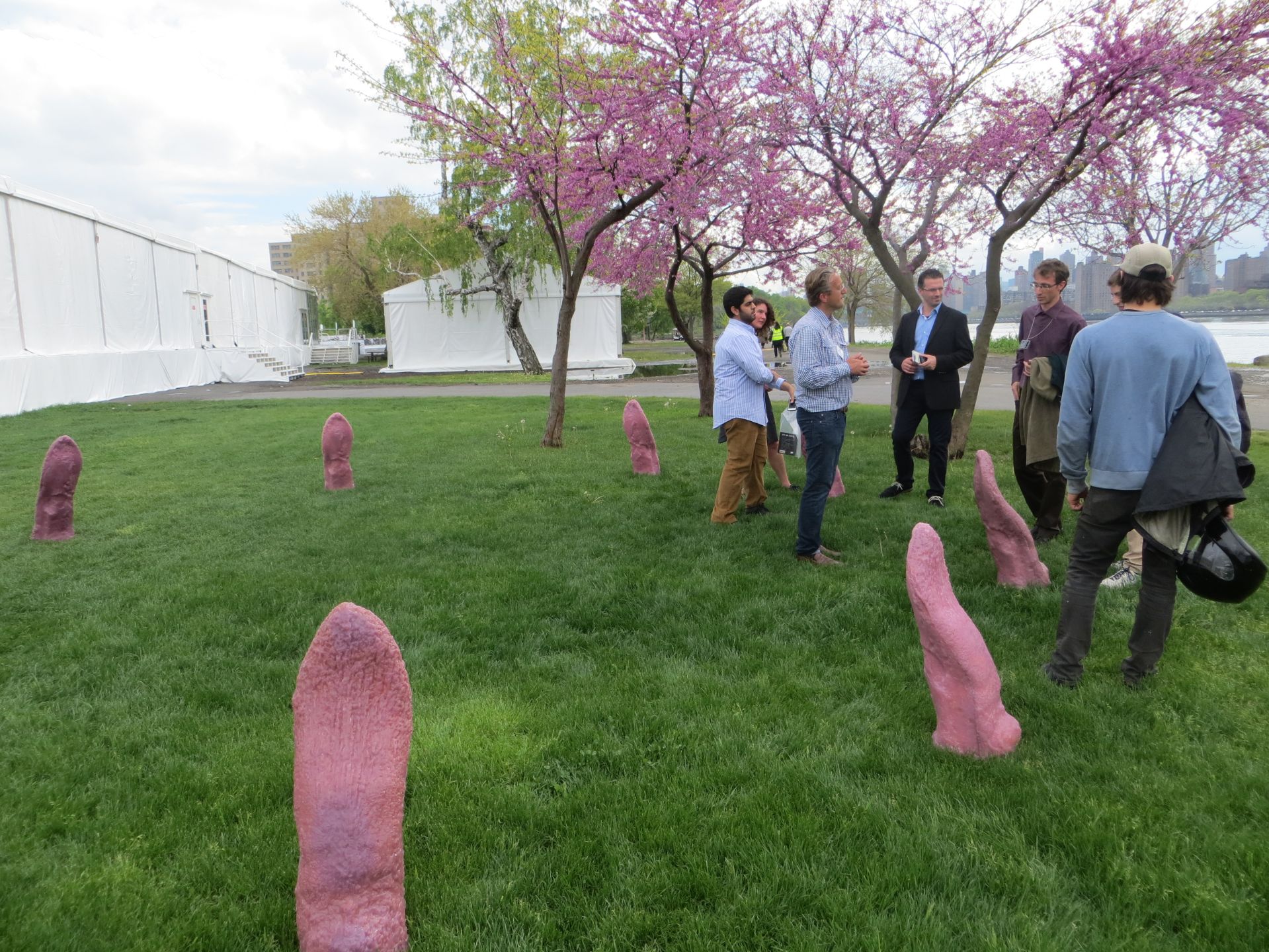 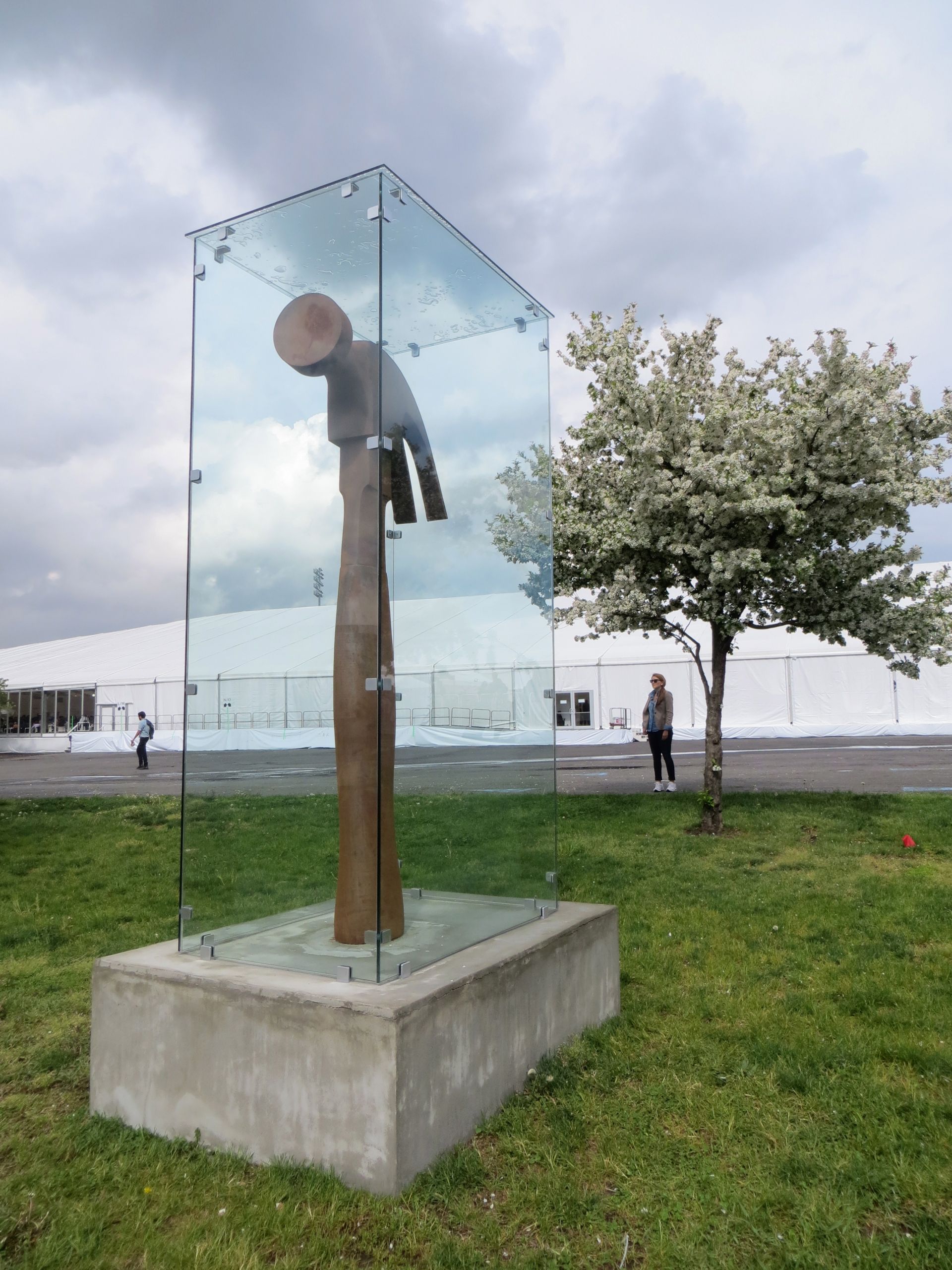 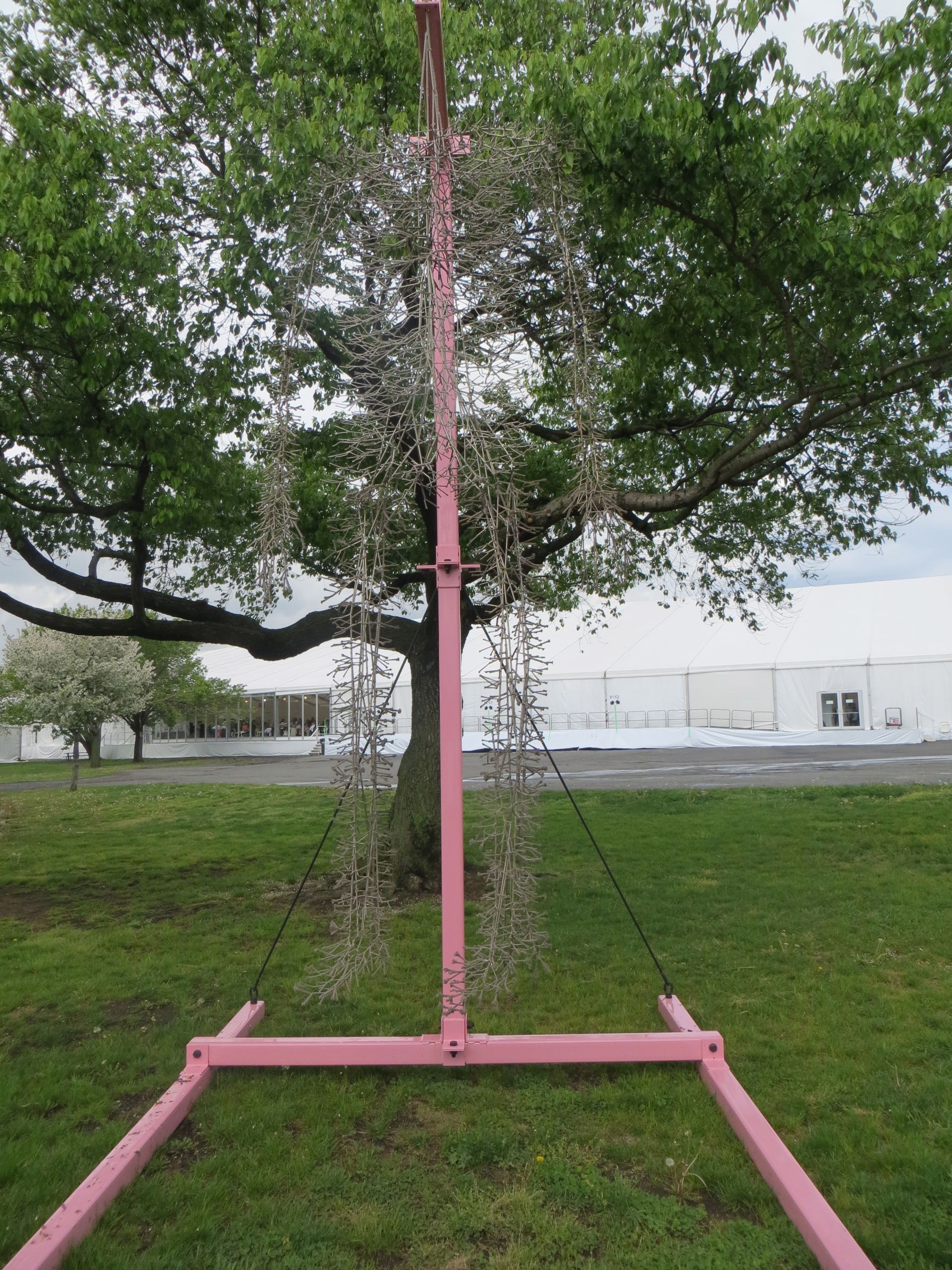 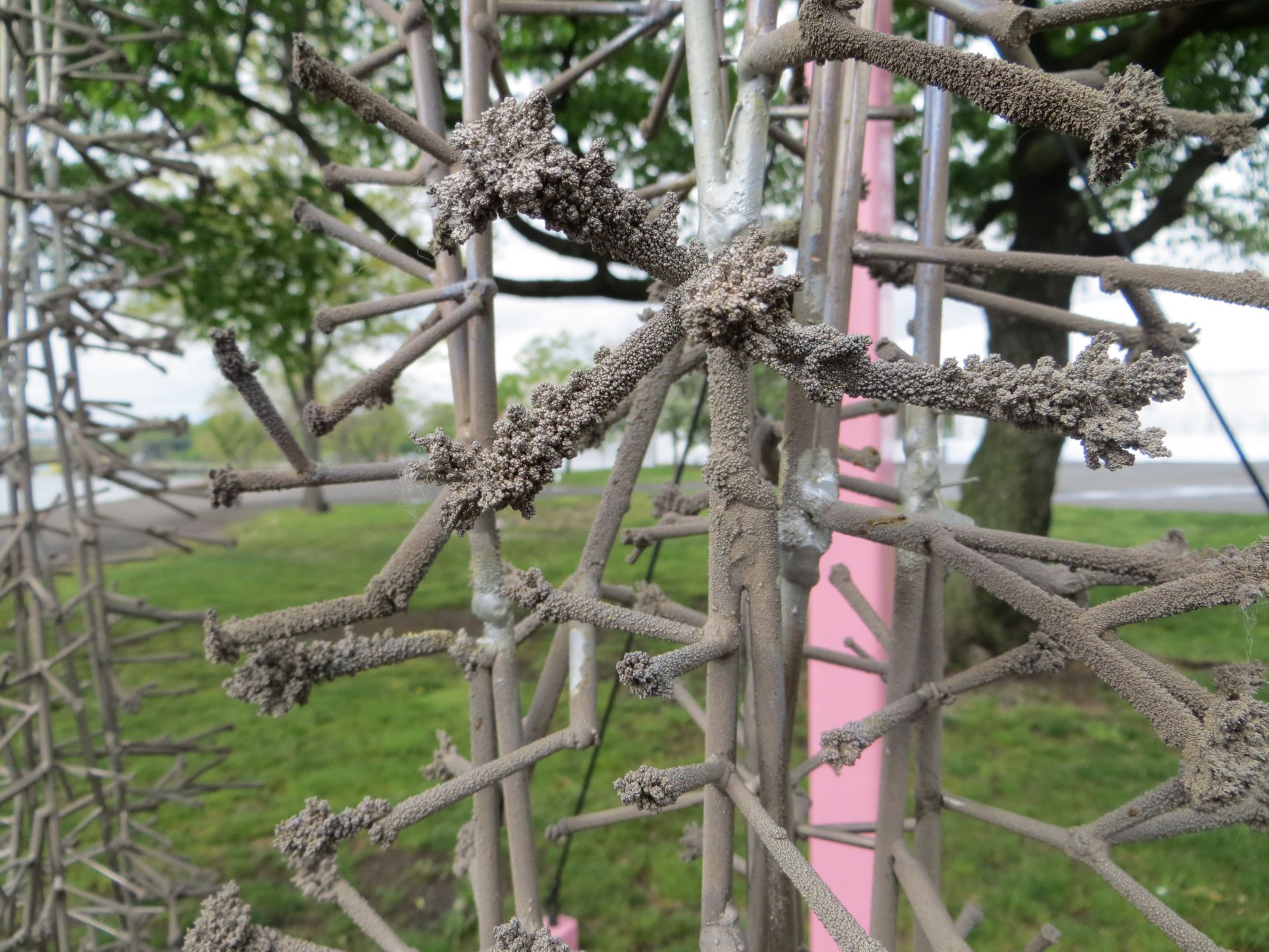 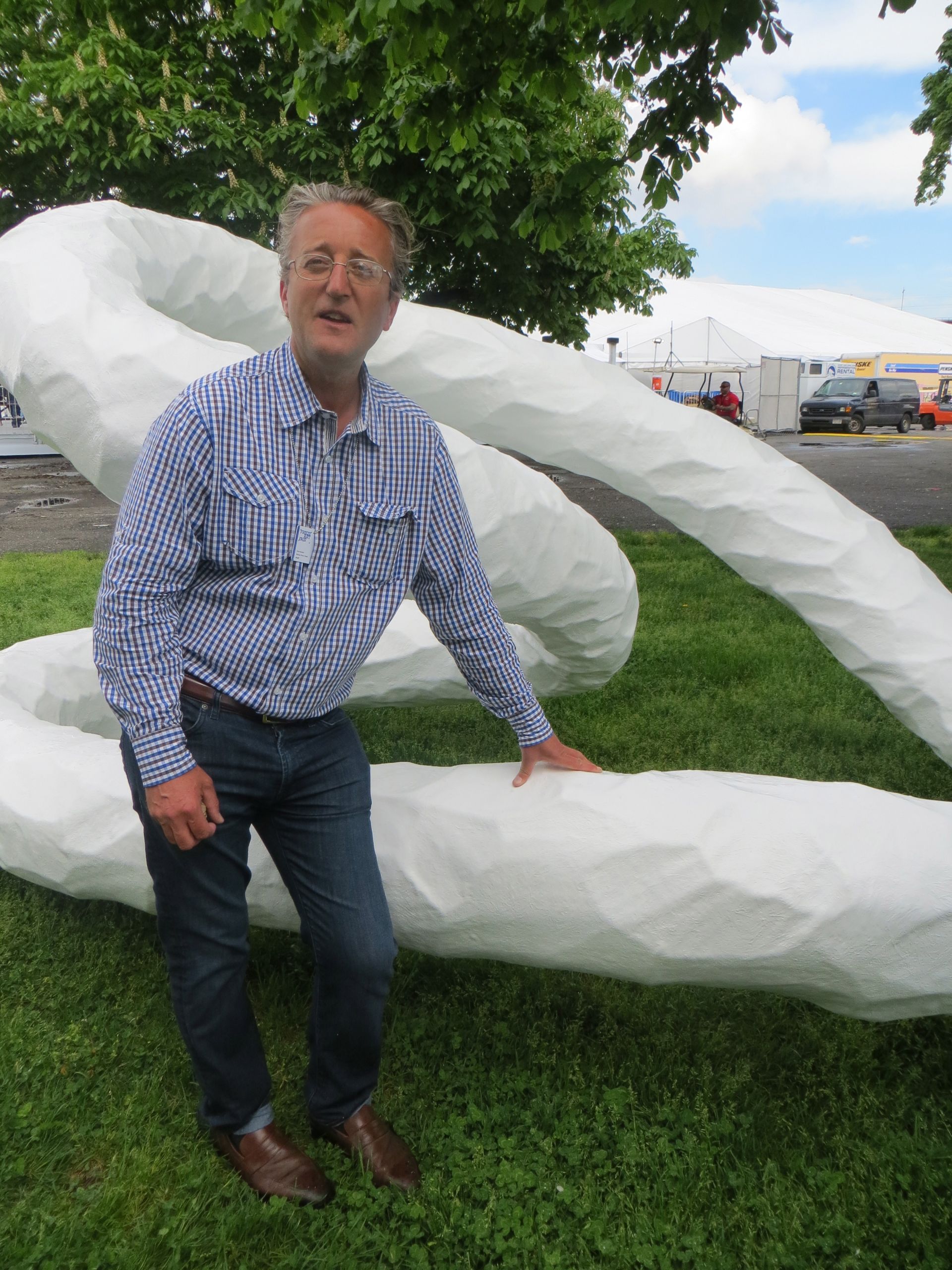 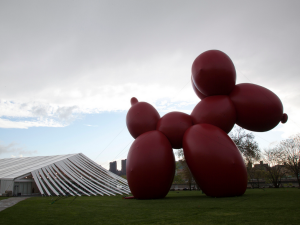 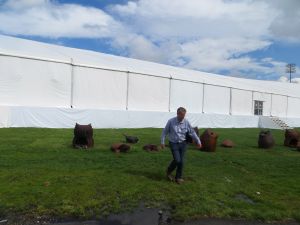 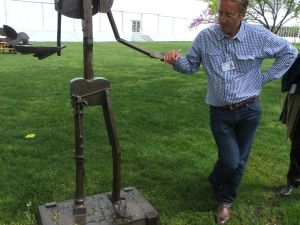 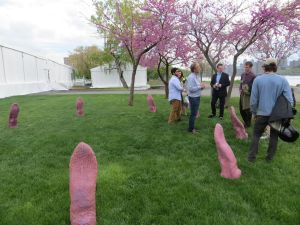 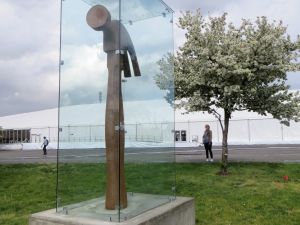 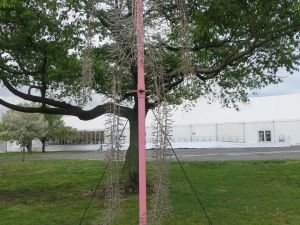 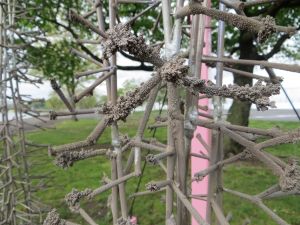 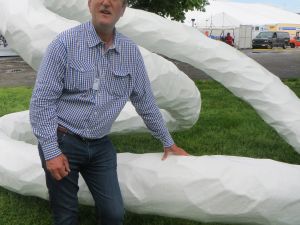 Any lingering storm clouds hanging over yesterday’s VIP preview of Frieze New York were thoroughly blasted away by 4 p.m., when bright sunlight glinted off Paul McCarthy’s Balloon Dog (2013), an 80-foot, cherry-colored sculpture created especially for the fair. “Paul has sexualized the dog,” said the rakish Tom Eccles, former Public Art Fund director and this year’s Sculpture Park curator, as he led a few card-carrying VIPs up to the gigantic piece. Mr. Eccles pointed to the anatomically suggestive shapes of the Koons-esque animal, though they didn’t need much identification. Now executive director of the Center for Curatorial Studies at Bard, Mr. Eccles briefly discussed his curatorial work on Mr. McCarthy’s upcoming installation at the Park Avenue Armory. He described “WS,” which stands for “White Snow” and opens June 19, as a “gory, horrifying tale of Paul McCarthy as Disney, as Hitler, in love with Snow White.” (Spoiler alert: Mr. McCarthy is eventually destroyed by the seven dwarves, but not before he engages in “a sexual frenzy” with them and Snow White.)

With that vivid imagery in mind, the small tour group rounded the northernmost end of the Frieze tent, following Mr. Eccles along the curve of the East River over to Pae White’s faunal barbecue sculptures—squat metal owls and more ambiguous animals that can be used for cooking. The various creatures composing Briquettes and Support: Fox, Bird, Owl, Turtle, Frog (2003), which were originally commissioned by Minetta Brook for Bear Mountain State Park and Franklin D. Roosevelt State Park in upstate New York, had changed with time.

“I haven’t seen them in 10 years,” said Ms. White, who seemed pleased that they’d weathered in different ways, some streaked with rust, others still dark grey. “It’s really important to me that they don’t get cleaned.” The small characters looked cute, a contrast with Mr. McCarthy’s carnal dog looming in the distance.

As Mr. Eccles expounded on the setting of each work, explaining the logic behind its location, he tended to touch the art in question. Upon arriving at each and every sculpture, Mr. Eccles grabbed hold of some appendage, whether it was the iron hand of Jason Meadow’s St. Francis (2010) or the crinkly stainless steel foot of a figure in Tom Friedman’s Circle Dance (2010). “Frieze seems to have gone to great ends to put ‘Please do not touch’ signs,” he said, “but the fact is, tactility is an absolute fundamental part of sculpture.”

Further on, New Zealand-born Artist Fiona Connor led the VIPs around the series of small, playhouse-like structures composing her piece Style Guide Spa (2013). Ms. Connor, whose unruly blond curls were complemented by an errant streak or two of blue paint on her left leg, paused at one eye-level box. “There’s an MP3 player here, though I think it’s been stolen,” she said without betraying the slightest bit of distress.

“I think here,” she said a little gleefully. “But it’s exciting! The rain and experiencing these insane conditions, like robbers at the VIP hour…”

“There’s lots of robbers in there,” Mr. Eccles chimed in with a conspiratorial grin, gesturing toward the tent. “Robber barons!”

The group left the scene of the crime and wandered up to Amygdalas (2013), Martha Friedman’s circle of pink, hip-height, cast-rubber tongues. Mr. Eccles, who described the piece as “a lascivious Stonehenge,” said its original location caused problems. “It proved incredibly controversial with the reiteration of FOOD over there,” he said referring to the reprisal of Gordon Matta-Clark and Carol Goodden’s Soho restaurant, where artists cook for patrons. “We actually had it over there, but it was felt that it was challenging the seriousness of the FOOD installation.”

Nick van Woert’s Primitive (2013) also changed places. Originally slated for a more open area, the humanoid form looked very different than Mr. Eccles expected it to. Instead of boasting big, robust forms, the body bristled with branching bits of barnacled metal, and Mr. Eccles tried it under various trees, eventually settling on one near the . Mr. van Woert pointed out that pieces of foliage were getting caught in the spiky shoulders of his sculpture. “We’re not trying to mask our levels of unprofessionalism,” Mr. Eccles said wryly.

“Staying with the shit theme,” Mr. Eccles said as he led the group from there over to the following work, a vaguely Giacommetti-esque spindly sculpture by Charles Long, inspired by the artist’s studies of bird guano. One VIP in a smart suit asked Mr. Eccles if  birds ever made, well, contributions to the piece. “It’s always good,” he said, before moving on to the final work.

A few golden moments (2011) by Tom Burr may be the most intimate of all the sculptures on view. The mirrored work, which Mr. Eccles said might evoke undressing behind a folding screen, gleamed especially brightly in the late-afternoon sunlight, reflecting a handful of people staring back with the city behind them.

See the slide show above for a tour of the Sculpture Park. All photographs by Zoë Lescaze unless otherwise noted.