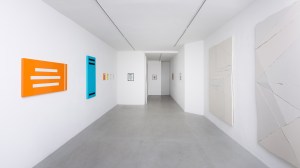 Bob Zoell’s enameled metal boxes date back to the ’90s, but they look like omens of where we’re going. In white, gray, powder blue, emergency orange, Starburst yellow and Pepto-Bismol pink, they’re painting-sized containers of nothing, ominously monochrome except for a few black or white horizontal stripes like redactions in a Freedom of Information Act request. Paired with Wyatt Kahn’s canvas constructions—raw monochromes built of irregularly shaped little canvases pieced together into six-and-a-half-foot-tall rectangles—they waver between sweetness and poison, depending on what mercy we can expect from the image when it finally conquers the word. (Through June 2, 2013)