State Sen. Barbara Buono, the presumptive Democratic gubernatorial nominee, tonight  will name Jason O’Donnell as chairman of the state party, according to a high level source in the Buono camp.

Buono will name the Hudson County Assemblyman at the state party’s dessert reception, which is part of the annual conference in Atlantic City.

Buono’s choice of O’Donnell caps a month-long drama that saw Democratic party leaders working hard to convince Buono to find another choice, needling her both publicly and privately to move off O’Donnell.

Several names were floated, including that of Passaic County Democratic Committee Chairman John Currie.  Currie, who said publicly he was not interested in the job and would support Buono’s choice, met with Senate President Steve Sweeney last night, reiterating his stance.  Sweeney was among the most vocal opponents of O’Donnell, telling Buono in a meeting earlier this week that choosing the assemblyman would divide the party.

Other party leaders, including Assembly Speaker Sheila Oliver, also had reservations about O’Donnell, who was part of an attempt late last year to overthrow the speaker.  Oliver had requested a meeting with O’Donnell to clear the air and earlier today, PolitickerNJ reported that the two met for lunch in Atlantic City.

Throughout the controversy, Buono has bristled at the attempts by party leaders to dictate to her who should assume the chairmanship, saying it is traditionally the choice of the party’s gubernatorial standard bearer.  In the end, the source said Buono was most comfortable with O’Donnell and feels he brings with him the energy the fractured party needs. 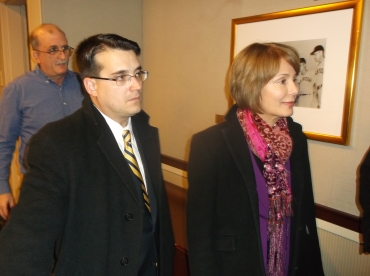