CANNES, France — Gloomy skies may be hanging over the south of France, but psychedelic philosophizing is lighting up the screens indoors. Ari Folman’s The Congress opened up the Director’s Fortnight section of Cannes last night with a loopy dose of future shock featuring Robin Wright as a washed-up variation of herself who sells her scanned body, plus a gallery of emotional expressions and all performance rights, to Tinseltown composite Miramount Studios. No need to suffer the scandal-prone peccadillos, erratic temperaments or drug-fueled habits of stars; after turning them into digital avatars, the studio can dictate movie roles, shape career decisions and exploit promotional duties without any pushback. The forever-young and totally automated celebrity will do its duty impeccably and in perpetuity. (TMZ should fear for its life.) Director Ari Folman, second from left, poses with the cast of The Congress. (Getty Images)

The digital Faustian bargain (pitched by Ms. Wright’s aging agent, touchingly played by Harvey Keitel) becomes midnight-movie manna when, 20 years later, Ms. Wright goes to a studio-run resort where people snort a gas that turns everything they perceive into a drug-fueled, candy-coated Looney Tunes cartoon populated by famous figures from pop history. In the future, humans are simply hallucinating shape-shifters who idolize past icons and morph seamlessly from Michael Jackson to Frank Sinatra to Grace Jones. But the next logical step is even more morbid: the studio, which has now merged with a Big Pharma company, wants Ms. Wright to sell her chemical essence so that they can let the public literally digest her.

The stoner-quality pontificating, which gets more baroquely animated and increasingly paranoid as it goes along, offers up dystopic visions that deliver kaleidoscopic science fiction at its most extreme—imagine Betty Boop crossed with The Matrix. The film is loosely adapted from Stanislaw Lem’s communist-era satire The Futurological Congress and its vision of a world dictated by illusions that pacify the public, and its update to 21st century anxiety about virtual reality is admirable. But there’s a thematic sprawl to the film that finally ends in emotional overreach and narrative obfuscation. You might need to be tripping balls to really feel like the ending has any sort of a satisfying climax.

Celebrated Chinese auteur Jia Zhengke is only slightly more down-to-earth in his ripped-from-the-headlines tabloid omnibus A Touch of Sin, a quartet of lurid stories taken from recent news events in China. A darkly poetic slant on everything from a recent high-speed train crash to the suicides at a Foxconn factory, with a few disgruntled employees that go postal thrown in for good measure, Mr. Jia’s latest takes the usually austere director into unfamiliar pulp territory that includes a shotgun rampage and a defiant pedicurist who gets deadly with a fruit knife after being bitch-slapped with a fistful of renminbi. The overt themes of economic oppression come through loud and clear, although the audience will probably feel pummeled rather than persuaded. Asghar Farhadi, right, director of The Past. (Getty Images)

Sober-minded literalists who prefer their plots unsullied by sensationalistic extremes will look favorably on divorce drama The Past, from poet of martial discord Asghar Farhadi (whose Oscar-winning film A Separation was a devastating look at an Iranian couple at the end their marriage).  As with his previous film, this delicately calibrated story of husbands, wives and children all shell-shocked by emotional upheaval makes for a compelling study that slowly (if tauntingly) parcels out its plot revelations like grenades that cause irreparable collateral damage. The setting is now France, and the cast includes Oscar nominee Bérénice Bejo (The Artist), but the concerns and emotional conflicts are clearly universal. It’s good to know filmmakers here can show devastated lives without always causing literal devastation. 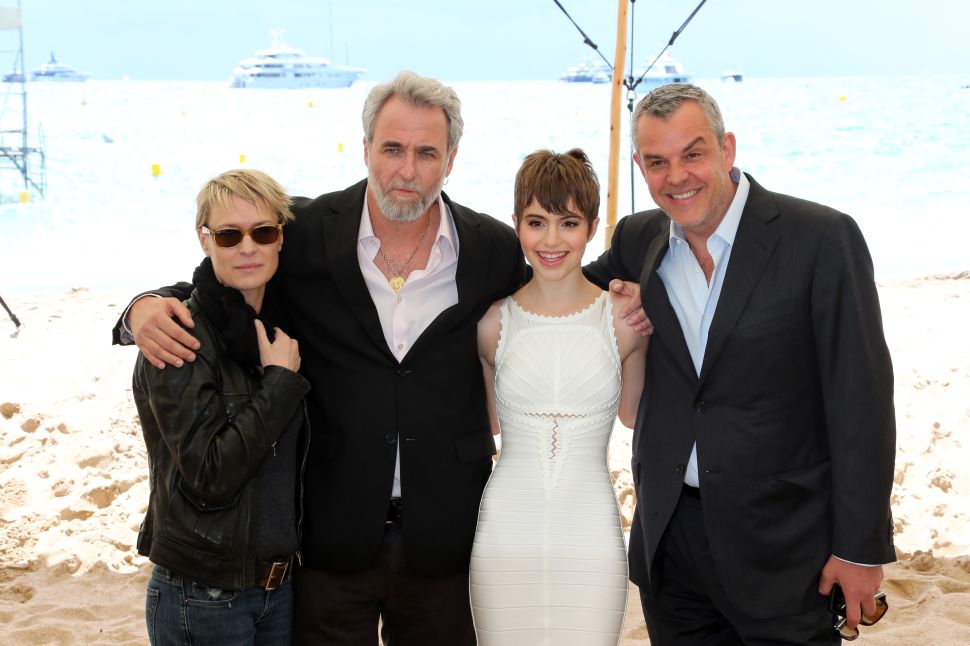 Filed Under: Entertainment, Cannes Film Festival, Robin Wright, The Past, a touch of sin, the congress