A milestone in gay cinema, a powerful mainstream love story, and a quintessential zeitgeist picture in this age of legalized same-sex marriage, Blue is also an incredibly accessible, deeply felt and vibrantly relatable coming-of-age epic of first love. The jury, headed by Mr. Spielberg and including Ang Lee, Nicole Kidman and Christoph Waltz, wielded “their sovereign subjectivity” (in the words of Audrey Tautou, maîtresse de cérémonie at the closing night awards) to make a bold choice for Palme d’Or—the kind of political and cultural statement that makes Cannes not only relevant but authoritative. (Mr. Spielberg also now has instant cachet as a legitimately hip cinéaste of the highest order.) The film’s stars, Adèle Exarchopoulos and Lea Seydoux, who turned in revelatory performances, were widely tipped to win the Best Actress award. Cannes’s regulations, though, only allow for one award to be given to any single film, so it’s worth noting that Spielberg’s jury made the surprising and precedential decision to break from tradition and award the Palme d’Or not only to Mr. Kechiche, but also to his actresses. In his acceptance speech, the Tunisian-born Mr. Kechiche dedicated the picture to the French youth he met while making the picture as well as to the Tunisian youth whose courage sparked the Arab Spring. “They have this aspiration to live free, to express themselves freely and to love in full freedom,” he said.

Second prize (the Grand Prix) went to Inside Llewyn Davis, Joel and Ethan Coen’s heartbreaking and deceptively profound character study about a caustic troubadour trying to make it in the 1960s Greenwich Village folk scene. (Surprisingly, this picture is only the second time, since 1994’s The Hudsucker Proxy, that the Upper West Side directors have set one of their films in New York.)

Best Actress went to Gallic fave (and Oscar nominee for The Artist) Bérénice Bejo, the star of Asghar Farhadi’s divorce drama The Past. Clearly stunned by the award (“Attendez!” she said tremblingly to the crowd as she collected herself), Ms. Bejo invited her director to share the stage with her. And Bruce Dern’s turn as a Midwestern fogie in Alexander Payne’s Nebraska won him the prize for Best Actor, stunningly beating out Michael Douglas’ widely-praised portrayal of Liberace in Behind the Candelabra. (In light of Blue’s major win, one wonders if the jury just didn’t want the awards to be too, well … gay.) Cannes always seems to have at least one head-scratcher at awards time, and this year’s confounding choice was Amat Escalante getting Best Director for the violent and almost universally derided Mexican drama Heli (aka the film with the flaming penis). “Thank you to this brave jury,” said Escalante, who said he wasn’t expecting this. (Nor was anyone else, Amat…)

Best Screenplay went to Jia Zhangke for A Touch of Sin, his damning and ultra-violent quartet of real-life stories about contemporary life in China. And the third-place Jury Prize went to Kore-Eda Hirokazu’s Like Father, Like Son, a touching study of two sets of parents who are told their 6-year-old sons were accidentally switched at birth. (Many prognosticators rightly thought this would be cinematic catnip for Mr. Spielberg, poet laureate of the broken home.)

“We listened to our hearts and searched for which piece of art produced an echo,” said Mr. Spielberg by way of explaining how the jury came to their decisions—a well-said statement about a well-chosen crop of films. Let the reverberations begin. 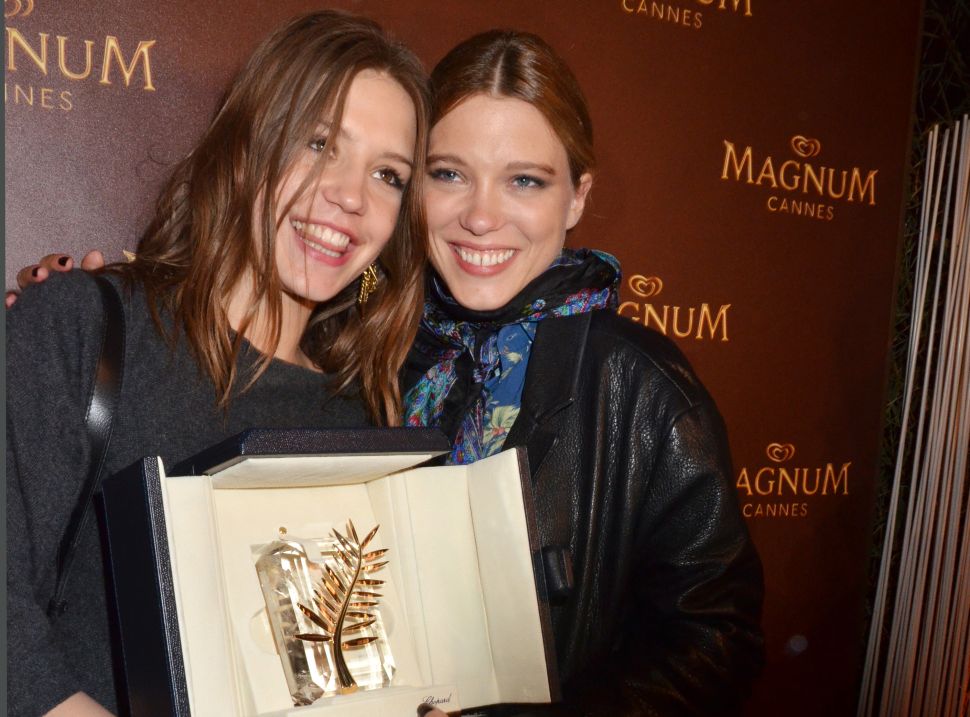