It has long haunted Democrats worried about supporting anyone opposing incumbent Republican Chris Christie, a man who threw people behind bars for a living as U.S. Attorney prior to becoming governor.

Even now, as he runs for re-election, there’s reluctance among Democratic Party types who worry about making a political misstep and facing the political wrath of the Christie administration.

“Don’t use my picture with Barbara Buono – please,” a Democrat pleaded with PolitickerNJ.com recently, terrified of turning into a human bulls-eye at Election time.

There appeared to be none of that in play today as Christie pick-pocketed another Democrat, this one in Burlington County, in a swing district: LD 7, to be precise, home to rising star Assemblyman Troy Singleton (D-7) and his long toiling running mate Assemblyman Herb Conaway (D-7).

“I’m a former principal,” Democratic Mayor James Fazzone told PolitickerNJ.com. “If a teacher came in and did a good job, I would hang onto that person rather than go to the pool of new applicants.”

It wasn’t fear that drove Fazzone to embrace Christie, both men said.

It was flatly Hurricane Sandy, the mayor explained.

“It’s all about relationships,” he told reporters, his and Christie’s hair picturesquely wind tossed as they stood in sunlight beside the Delaware River. “We had a chance to develop a relationship during Hurricane Sandy.”

“As a mayor, my job is to do what is in the best interest of the City of Burlington,” he added.

He was the fifth Democratic mayor to back Christie and the second to specifically cite Hurricane Sandy (the first was Sea Bright’s Dina Long) as the reason.

“Jim is putting the people of Burlington first,” said Christie, who walked down High Street downtown, shaking hands with happy business owners before arriving at the riverside podium.

“I never understood it as fear,” Christie said of his psychological impact on the other party’s campaign mindset. “I see it as respect. As U.S. Attorney, I wouldn’t tolerate corruption and they knew I would put them in jail if they broke the law. I wasn’t going to change.”

But it didn’t take the winds of Sandy, he insisted, to tease out his administrative and organizational skills. He had executive ability as U.S. Attorney, and knew how to motivate people then, as now.

“The two still co-exist,” the governor said. “You call it fear, I call it respect – and the intent to get the most out of the people who worked with me.”

Christie called the endorsement in a battleground district “Very significant.”

“It sends a strong message about performance,” the governor said.

Fazzone said he plans to support Democratic incumbents Conaway and Singleton, in part for the same reason he’s backing Christie and backed teachers who performed in school: there’s no reason to fire them.

A face in the crowd, Joe Novemsky, self-identified as a supporter of the labor movement, and a CWA member, said he didn’t support Christie. “He hasn’t created a single job,” he said. “Too many of those businesses on the street he walked down just now were closed. I’m surprised Jim Fazzone is flipping his support. It’s disappointing.

He was the only one around who spoke up in protest. 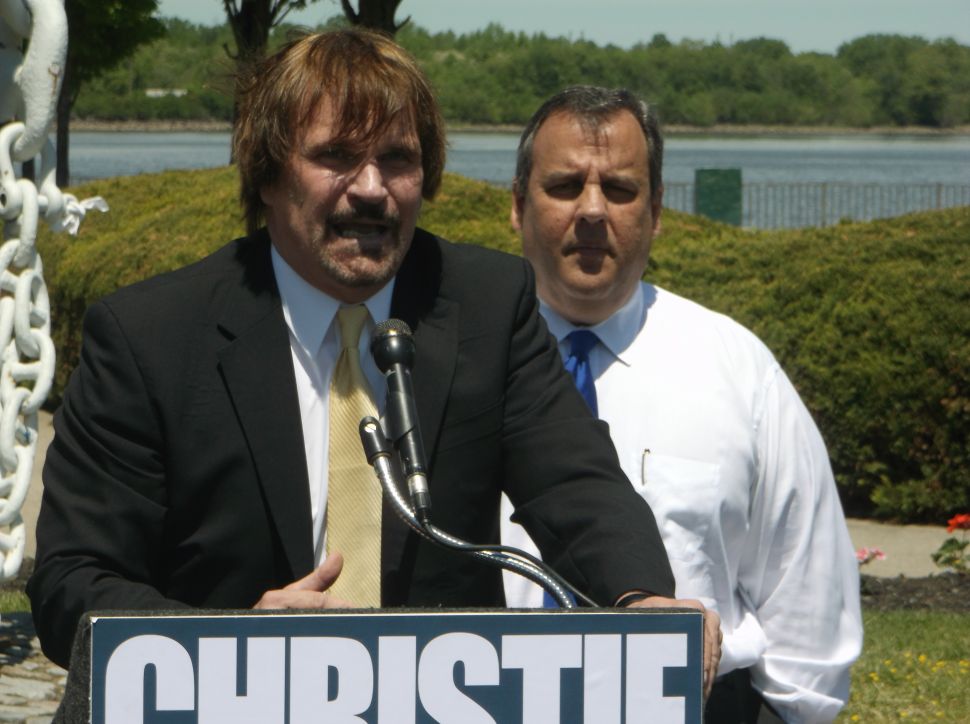