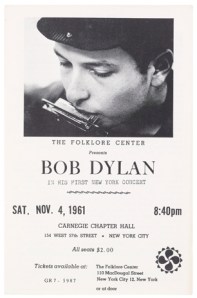 The lyrics for an unreleased Bob Dylan song, “Go Away You Bomb,” will be auctioned at Christie’s on June 26. The song, according to Rolling Stone, was written by Mr. Dylan for Izzy Young of the Greenwich Village Folklore Center in 1963. The lyrics sat in a drawer in Mr. Young’s house in Stockholm for years before he rediscovered them recently.

An’ my friends ‘re gettin headaches that split an’ spit an’

The lyrics have an estimated price between $40,000 to $55,000, according to Rolling Stone. Also for sale is a poster–pictured at left–for Bob Dylan’s first New York concert in 1961 at Carnegie Chapter Hall.