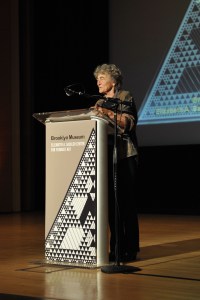 You can now mark your calendars. The fifth annual Creative Time Summit, which convenes an international group of intellectuals of every stripe for two days of talks and discussions, has been set for Oct. 25 and 26 at the Skirball Center for the Performing Arts at New York University, where it was held last year. The keynote speakers this time are Lucy Luppard and Rebecca Solnit.

The full lineup has not yet been set, but among the confirmed presenters are artist Vito Acconci and Pedro Reyes, Jimmy McMillan (the gentleman running for mayor with The Rent Is Too Damn High Party) and John Fetterman, the mayor of Braddock, Pa.

Last year featured Slavoj Žižek and multimedia artist Martha Rosler as keynote speakers and a presentation-performance from Documenta 13’s artistic director, Carolyn Christov-Bakargiev, which included an invitation to the entire crowd to meet her a few days later at the Ceci-Cela pâtisserie in Soho.

Who knows what will happen this year?