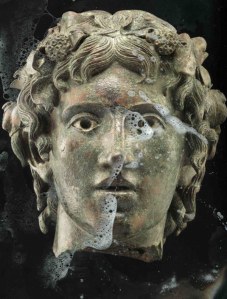 Donatien Veismann’s ‘About the Greek Ideal,’ 2008. (Courtesy the artist and Envoy Enterprises)

Jimi Dams assembled the sculpture, video, and predominantly figurative paintings and photographs that make up “DIAcussion,” his elegantly understated group show at Envoy Enterprises, with the goal of letting the art speak for itself. What it says—with a strong assist from Mr. Dams’s hanging, which draws a single, well-chosen work from each of nineteen artists and groups the pieces in formally thematic twos and threes—is that the variety of formal choices available to an artist is a microcosm of the variety of human beings. Nan Goldin’s photograph Valerie After Lovemaking, Bruno Dressing, Paris 2001, a supine female nude with her head facing left and the colors of real life subtly heightened, hangs above Kelsey Henderson’s oil painting Jenn, a supine female nude with the chalky colors and soft precision of a Philip Pearlstein, her head facing to the right. Next to Jenn hangs Winston Chmielinski’s Soft 7, a supine female nude in bright, simple colors, with her open legs facing the viewer and her upper body smeared beyond recognition. It’s a deeply appealing vision, certainly not wrong though maybe too pat, in which the basic nature of experience remains constant while each person has her own slightly different way of seeing it, perfect for herself but not quite right for anyone else. Johan Tahon’s extraordinary ceramic bust CAMPBELL (black) sits beside Xia Jing’s Underground #1, a large-scale photo of a charcoal portrait of a Chinese miner, and Donatien Veismann’s About the Greek Ideal, a large-scale photo of a photo of a bronze bust of Alexander the Great, on which Mr. Veisman spat: the young conqueror stares through the passing, DNA-charged mists of time. A snippet of Beethoven’s Ninth plays intermittently in Micki Pellerano’s short film Ashlar and Pentacle. Rounding out all this gentle humanism is Carlos Betancourt’s The Cut-Out Army, four photo prints on black canvas of more than a hundred separately posed, eccentrically costumed models. Their number takes the weight off of any given choice but loses none of the benefit. (Through May 26, 2013)