The Village Voice‘s editor in chief Will Bourne and deputy editor Jessica Lustig met with staff late this morning to announce they are leaving the paper rather than lay off any more of their already skeletal staff, The New York Times reported.

Voice Media Group executive editor Christine Brennan had told Mr. Bourne and Ms. Lustig that they would have to eliminate or drastically reduce five of the 20 postions at the paper.

“We are both leaving because I was summoned to a meeting and asked to get rid of five people and we are on a short string already,” Mr. Bourne told the Times. “When I was brought in here, I was explicitly told that the bloodletting had come to an end. I have enormous respect for the staff here and the work they have been doing and I am not going to preside over further layoffs.”

The downtown alt-weekly has been floundering of late. Last August, they had a significant round of layoffs and switched some full time postions to part-time. Former editor in chief Tony Ortega left in September to focus full-time on debunking Scientology, prompting rumors the he was pushed out. Shortly after that, the newspaper chain underwent a corporate restructuring that separated the company’s papers from Backpage.com, the controversial and highly profitable adult online classifieds site that was a key source of revenue.

After Mr. Ortega left, the Voice posted a listing on JournalismJobs.com looking for an editor in chief who “understand[s] how the city’s arts and culture appeal to Voice readers” and “work[s] exceptionally well with words and people.” Mr. Bourne, a former editor at large at Inc.and executive editor at Fast Company got the job in November.

It will be interesting to see what next week’s paper, which the editors were in the middle of closing, will look like. 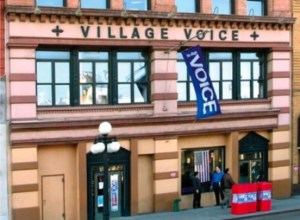