The printed word has become a dirty word in the Upper West Side.

Two members of the local community board have launched a campaign to rid the streets of free newspapers and the boxes that carry them.

“They’re so dirty that nobody in their right mind would touch them,” an outraged Marc Glazer told DNAinfo.com. Papers like Metro, amNewYork and The Village Voice use the brightly colored boxes for distribution.

Mr. Glazer is particularly outraged with The Learning Annex’s red-and-white containers, who he says are “simply not contactable; the numbers on the boxes aren’t even connected.” He and fellow community board member Dan Zweig want the Department of Transportation to clear them off the streets.

However, the Department of Transportation currently has “no limit to the number of newsracks that can be placed on the sidewalk” as long as each rack is in compliance with all other regulations. There are penalties up to $4,000 if the boxes break the rules.

In 2002, Mayor Michael Bloomberg introduced legislation to regulate the placement of the news racks, but interest fizzled.

Of interest is that Mr. Glazer is the owner of the Upper West Side’s only nightclub, Columbus 72, where a man was slashed in the neck during an incident in March. We get that newspapers can be kind of annoying, but we doubt they’re getting into the same kind of trouble as the late night set. 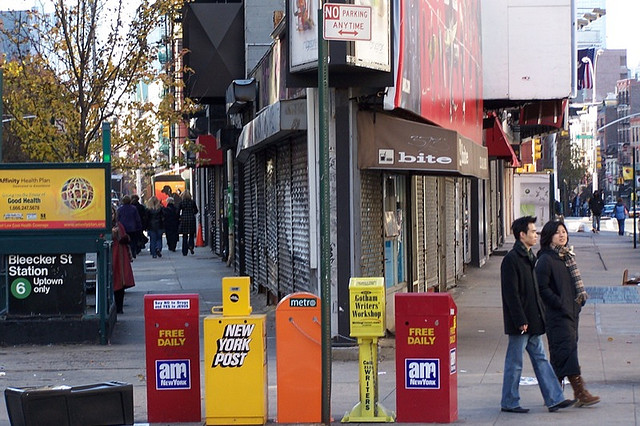