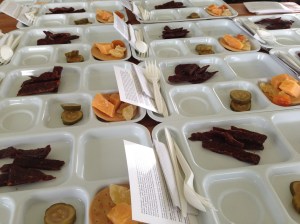 Sure, there’s plenty to eat at Frieze New York—The Fat Radish, Frankie Sputinos and Mission Chinese all have stands that serve approximations of the food found at those restaurants—but if you require aesthetic nourishment along with the regular kind, Frieze offers the project FOOD 1971/2013, an outdoor tribute, near the north entrance, to Gordon Matta-Clark and Carol Goodden’s restaurant of the same name.

Tina Girouard, Jonathan Horowitz and Carol Gooden will present meals there throughout the fair, but opening day was a collaboration between Matthew Day Jackson, SunTek Chung, the filmmaker Joseph Hung and a dog named Punkin, all credited on a blackboard near the stand where their project was served. Their lineup wasn’t exactly Frankie. On white cafeteria trays participants were served pickles, cheese with honey on hard tack, a Korean stew and beef jerky. And to drink: Tang.

“A large part of this is about survival, preservation and our relationship to it,” said Mr. Chung, who happened to be hanging out at one of the picnic tables. The meal was inspired by a road trip the four took from Brooklyn to Jackson, Wyoming, during which they largely subsisted on beef jerky. For this project they sampled around 18 different types of jerky at the Greenpoint studio of Mr. Day Jackson, who has, in the past, made self-portraits of himself using meat.

Mr. Chung said he was interested in the idea that preservation techniques using before the invention of refrigeration are now a part of regular eating. “Pickling, kim chi. Cheese?” He said. “Cheese is amazing.”

All of it did sound good, but at $15 wasn’t always an easy sell. Standing behind two pots of soup and a tableful of trays, two cooks, such as they were, hyped each part of the meal to a couple mulling it over.

“Isn’t Tang bad for you?” asked a blond woman with a ponytail

“No way!” said one of the cooks. “Astronauts drink it.”

She thought about it for a minute. “You don’t have any vodka do you?”

“I’ve experimented with a little jerky,” said Brian Boucher, an editor at Art in America, who was eating at one of the picnic tables with the curator Amy Smith-Stewart. “I recently bought a bunch of jerky and bottled water for my house so that I’ll be able to survive in case there’s another Hurricane Sandy. This jerky rates high.”

“I wish there was GORP,” Ms. Smith-Stewart said.

“I really like the tray,” said Sean, an artist at another table. “It feels very orderly, very standard.” He said a few kind things about the food but really focused on the tray. Wasn’t it just a tray? “No, I mean I have to think it was considered. It was probably definitely considered.”

The whole thing went over less well with a group of French curators that filled one of the tables. A bald man with a goatee acted as their spokesman.

“I was just thinking about how I would rather eat a ragoût,” he said, and then mused on how this would sound as a quote. It was his first time eating jerky and would probably be his last. Everyone at the table seemed to have a problem with the Tang, which they pronounced Tong. Too retro. “We do not drink this anymore,” said the spokesman.

Ted Loos, a writer, filmed a segment for Sotheby’s in which he sat at one of the tables and described the food, talked about the project and ate a little of it. Afterward, as the camera crew packed up, the rest of the meal sat on the table.

“This is definitely more about the art than eating,” he said.

“This is the most expensive camping food I ever bought,” said the artist Nick van Woert, who set his tray down across from Mr. Chung. A friend of Mr. Chung’s praised Mr. van Woert for supporting the project.

But there was no taking the sting out of the price. Especially since meals at the original FOOD were only $1.