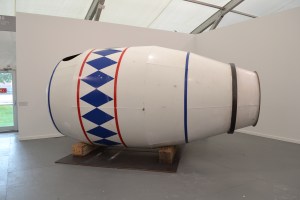 One of the more imposing sights at Frieze is the cement mixer at the booth of New York’s CRG Gallery. It’s a found object by the Brazilian artist Alexandre Da Cunha, which he painted red, white and blue and carved a kind of skylight hole into the top of. It looks something like a very large circus cannon. The piece rests on two massive blocks of wood, and it’s so heavy that the floors had to be reinforced.

“Oh my God,” sighed Glenn McMillan, one of the founders of the gallery, when asked if it was difficult to install. “This was put in before the walls were. We had to use professional riggers, people who just move objects as their livelihood. Have you looked inside? You can see the light come in from the top there.”

It’s a muscular, sturdy kind of sculpture, and a funny buffer to the fact that the roof above the gallery’s booth was leaking from all the rain outside. There were two flimsy coffee cups collecting the water.

“It’s not something that is a problem for us,” Mr. McMillan said. “It’s an outdoor piece.”

As for the price, Mr. McMillan didn’t want it printed: “The discourse becomes about the price instead of the object. Americans are very obsessed with numbers. And it all comes back to this, ‘Oh I could have done that.’ And Alexandre’s art comes out of a place of distinct rigor.”

Fair enough! The piece, by the way, is still available.

“It’s not something that you could just pluck up and put in your backyard,” he said.