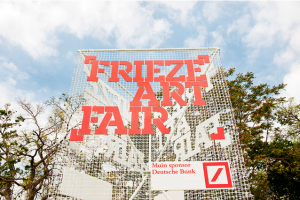 While it’s safe to say that we’ll be spending most of Frieze Week at its namesake fair out on Randall’s Island, there are other fairs afoot. Here’s a guide to finding them.

FRIEZE NEW YORK: MAY 10–13
Frieze New York is returning to Randall’s Island with over 180 international exhibitors for its second edition. The big news here is that the mint green Wards Island Footbridge, which was inconveniently closed for construction last year, is now open, allowing (relatively) easy access to the island. If walking sounds wearisome (or wet given the weather forecast), there’s the Frieze ferry service, which runs every 15 minutes during fair hours from the 35th Street Ferry Dock on the East River and takes about 20 minutes (the $12.50 roundtrip tickets must be booked in advance). Alternatively, the Frieze bus service will pick you up outside the Guggenheim Museum on Fifth Avenue between East 88th and 89th Streets, arriving approximately every 10 minutes during fair hours. The bus journey will take about 15 to 20 minutes according to the fair’s website, and roundtrip tickets cost $5.50 (they are also only available in advance).
Hours: May 7–12, 11 a.m.–7 p.m., May 13, 11 a.m.-6 p.m. Admission: one day $42, students $26, one day + catalog $75.