The Jersey City Mayor-elect’s victory on Tuesday night catapulted him onto a short list of potential 2017 gubernatorial contenders in the post-Chris Christie era. But it also immediately threw the white collar Democrat into party discussions about his endorsement plans this year.

Whether to long suffering Democrats damaged by Christie’s antagonism or Republican allies like state Sen. Kevin O’Toole (R-40), Fulop’s brand name right now is to Jersey politics what Bieber is to teenyboppers.

Given the choice of incumbent Republican Christie or Buono at St. Peter’s University/PolitickerNJ.com’s debate last month, Fulop wouldn’t say who he plans to support.

As for his own gubernatorial plans, he won’t rule out 2017 – but he also won’t talk about it right now, a day after he toppled the Hudson County Democratic Organization (HCDO)-backed Healy.

But surely he’s considering an endorsement of either Buono or Christie?

“Will he go to Atlantic City for the Democrats’ annual convention?”

Christiecrat rumors have hounded Fulop’s candidacy from the start, giving Healy rubber (as it turned out) bullet ammo during the campaign and setting politicos atwitter again last night on Zeppelin barstools when they sighted Essex County Executive Joe DiVincenzo and his chief of staff, Phil Alagia, among the Fulop revelers.

Although he hasn’t said he’s going to endorse Christie, Republicans speak openly about DiVincenzo’s sure support for the powerful GOP governor.

Democratic Party allies around Buono are left having to make those uncomfortable phone calls to newly minted boss Fulop, while others in the party consider the mayor-elect’s future statewide power potential and its impact on others in the party’s constellation of hopefuls.

Frank Pallone’s jabs notwithstanding, most insiders believe Booker will succeed U.S. Sen. Frank Lautenberg (D-NJ). The question then is whether he holes up in the Senate until he looks as craggy as John Kerry; makes a run for president out of the Senate a la Barack Obama; or tests the Jon Corzine model  (only this time successfully) by jumping from the Senate to governor in 2017 before leapfrogging into a presidential run.

Although Booker can boast that he already has executive experience as Newark’s mayor, Obama and John F. Kennedy were the only presidents in recent memory who made the transition from the august upper chamber to the presidency. Now, with Fulop potentially usurping Booker’s role as the next party star, Booker may have to run for president from the Senate rather than contend with Fulop for governor.

South Jersey was in the room last night. Trish Mueller, carpenters’ political director, helped Fulop win, and at her side stood Assemblyman Troy Singleton (D-7). Schooled by former Speaker Joe Roberts, Singleton is a potential future Assembly speaker who can benefit from future Fulop-molded Assembly people. But it’s no secret that Senate President Steve Sweeney (D-3) craves a 2017 gubernatorial run. Will he have to contend with Fulop in a north versus south gladiatorial spectacle?

“Swimming upstream,” in the words of Speaker Sheila Oliver (D-34), Buono could find herself at odds with the Democratic Party for the duration of 2013, yet carve out a base of diehards, including women and public sector workers, who will never forget her advocacy when everyone else in the party lived in terror of Christie’s wrath. Failing a very long-shot victory over the incumbent governor, Buono could resurface in 2017 as the progressive’s progressive against – fairly or not, depending on his moves in this cycle – Christiecrat Fulop.

Triumphant in a Democratic Primary for governor, the winner of Greenwald V. Fulop, regardless of who wins, could fumble away the general election blue collar vote. Whether branded north or south, they both radiate starched success – always a worry in populist circles. Fulop will have to keep Brian P. Stack close unless he wants to see the Assembly Majority Leader making that fearsome 2017 Primary walk in the Heights with Stack and Sean Connors. Then again, the mayor-elect doesn’t want to alienate George Norcross III, who’s close to Nick Sacco.

If things ever break down between fast friends DiVincenzo and Fulop, look for one of the powerful county executive’s stable to emerge as a gubernatorial challenger. The Essex homegrown Oliver is one option. 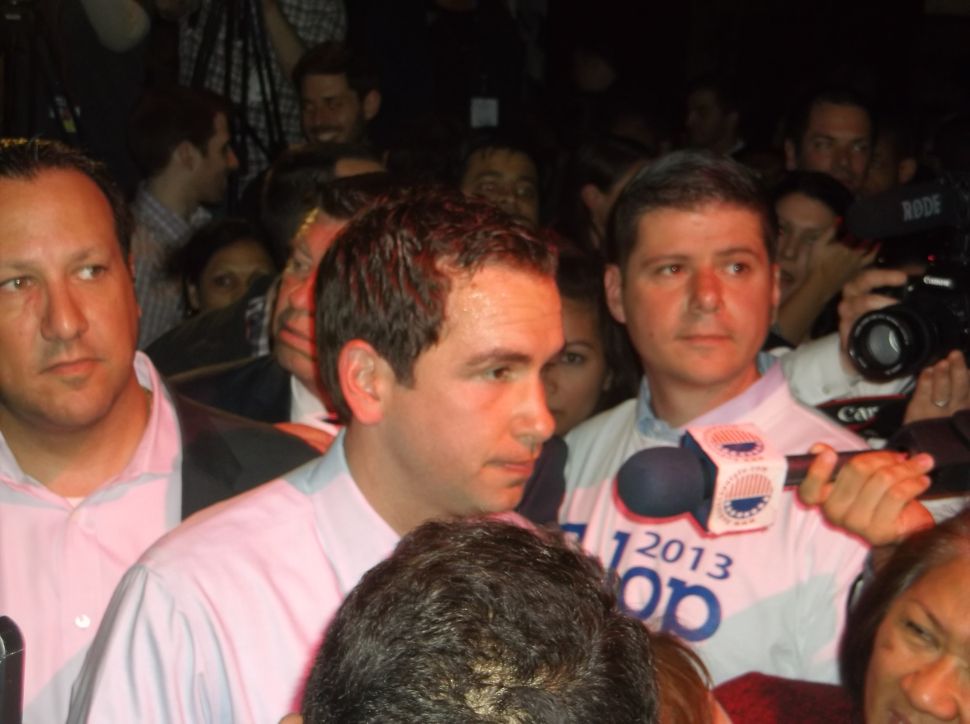