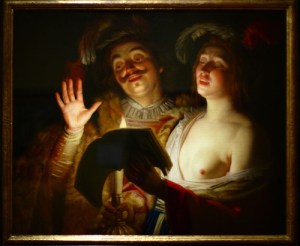 Christie’s June 5 Old Master sale in New York will be led by Gerrit van Honthorst’s The Duet, “a significant work with an exceptionally distinguished Russian provenance, which includes the collection of Count Alexander Stroganov, art advisor to Catherine the Great, as well as the Hermitage Museum,” according to a release. It was also looted by the Nazis from the home of the collector Bruno Spiro during World War II, and was on display at the Montreal Museum of Fine Arts for decades before being returned to Spiro’s heirs just last month. It is estimated at $2 million to $3 million.

In a statement, Christie’s Nicholas Hall, co-chairman of Old Masters and 19th century art at the auction house, said:

“This is a painting which has everything: it is a beautiful composition; it is by a major artist at the peak of his career; it is in pristine condition; and coming from the collections of Count Alexander Stroganov and then the Hermitage it has a superb provenance. Added to all this is the satisfaction that Christie’s is bringing to the marketplace a work which has, after a period of seventy five years, been returned at last to its rightful owners.”