IT IS AFTER MIDNIGHT in the kitchen of Le Baron, a Chinatown dance club. The chefs we have come to meet are squeezed shoulder to shoulder in the tiny space, chopping and frying for the throngs outside. Jon Gray is giving two waitresses in crop tops a pep talk, telling them to get as far into the crowd as they can before distributing the food. The doors have closed and the venue is over capacity. It’s going to be tough, he tells them. Hold the trays high.

Tonight is the inaugural event of his catering company, Ghetto Gastro, which draws on the talents of rising chefs who have earned their stripes at Le Cirque, Jean-Georges and wd~50, among other big names. “How many can we fit on a tray?” chef Dan Levin interjects, referring to the four-bite portions of chicken and waffles.

We pluck one from the trays and the flavor comes in waves. First the sweet crust. Then the feisty curried chicken. The cool heat of scotch bonnet mango butter. The creamy calm of the coconut waffles. And there are two more varieties to go: a fig waffle with chili chicken and foie gras butter, and a Belgian waffle with buttermilk fried chicken and maple butter.

Once the food has gone out, Mr. Gray takes the stage and thanks everyone for attending. He hopes you like the food, and he hopes you’re having fun. Now, he says, the “ghetto” part of the party is about to begin. He steps down to reveal a stripper pole, and with it, an obviously enhanced young woman gyrating to the booming bass. She spins around, casually flipping upside down. The music moves faster and so does she, her clothes slipping off as the crowd yelps in excitement.

“Ghetto means raw, uncut, unadulterated, unpasteurized,” Mr. Gray says after the party. “It means beautiful. It means fresh.” It’s not about class, race or geography. To be ghetto is to hustle. Ghetto Gastro began as a passion project in August of last year, but it’s turning into a full-time enterprise for Mr. Gray. When the company had its first party in February, there was no website, no business cards, no real plan for the future—only a single party for Solange Knowles to the company’s credit. Now clients include Ralph Lauren and Jack Daniels.

Sway Calloway, an MTV VJ, sees Ghetto Gastro as pioneering hip-hop food, in its blending of the real and the refined. A$ap Ferg and Raekwon of the Wu-Tang Clan are also regulars at Ghetto Gastro’s Freestyle Friday events, where the chefs test recipes on friends. There, fish and chips becomes delicately fried blowfish served with blue potato crisps. Droplets of chickpea puree dot the plates to look like peas and give the dish a pop of color. General Tso’s is similarly deconstructed: the Styrofoam staple is transformed into a confit of cubed poultry beside pan-fried ginger hair, all over creamed vegetables arranged in the shape of the yin-yang symbol.

THE MISSION TO RECLAIM “ghetto” comes from a sense of pride. Mr. Gray, along with Ghetto Gastro chefs Malcolm Livingston and Lester Walker, grew up a few blocks from one another in the Bronx. (Mr. Levin hails from Florida.) Mr. Walker had a particularly challenging childhood. His father was absent and drug dealers were an enticing influence. “People on my block, they were cooking other things,” Mr. Walker says. “Not food.”

Mr. Walker got into trouble of his own on occasion, and found sanctuary from the chaos outside in his mother’s kitchen. She was not a chef who started from scratch, favoring Ragu over a ripe tomato, but always put her own spin on the store-bought. To a young Mr. Walker, her lasagna was mythical. The smell of garlic would often waft into his bedroom and he would join his mother stoveside. “I would just put down whatever I was doing and run into the kitchen and open up pots and taste stuff,” he remembers. “She hated that.” His own palate evolved quickly, and in 1998, in his senior year at his fourth high school, he won a prestigious scholarship from the Careers through Culinary Arts Program (C-Cap).

Richard Grausman, the celebrated educator and founder of C-Cap, remembers seeing Mr. Walker cook for the first time. “He had good hands,” Mr. Grausman says. “He used his knife well and he was comfortable in the kitchen. He moved well.” He has watched Mr. Walker make the jump from a cook to a chef, finding his way into the city’s premier kitchens.

But it wasn’t a straight line for Mr. Walker. “I always had one foot in the streets, one foot in the kitchen,” Mr. Walker says. He was torn between the world he knew and the rush of the restaurant world, the tightly packed bodies and strict leadership of the chef. He found the chaos comforting and, in many ways, familiar. In 2006, he made a choice. He started working at Spice Market and Jean-Georges became his “big brother.” The food was foreign, Mr. Walker says, and the work was tough, but worth it. “The only Chinese food I grew up with was chicken wings and fried rice. I didn’t know there were so many different ingredients: lemongrass, Thai chili, Thai basil,” Mr. Walker says.

AFTER SPENDING MANY YEARS unschooling themselves in street talk to move up in the restaurant world, there’s a sense of marvel among Ghetto’s chefs that they can be themselves in the kitchen.

“I don’t think anyone is cooking the way we’re cooking,” says Mr. Walker. “We’re young men from the Bronx, pretty tough neighborhoods, you would never expect us to do the food that we do. You’d see a picture of us and you’d say, ‘Those guys? They can’t be good chefs. They look like street guys.’” Their downscale presentation pays homage to their roots; Arctic char will hide inside a Crown Fried Chicken box. A table will be covered in newspapers in lieu of linen. Wonder Bread is favored over French baguettes—and, for a certain kind of client, that’s what they want.

“We did a dinner party once and we used Olde English 40 bottles as carafes,” says Mr. Livingston. “People didn’t think twice about it. We just took the labels off and they loved it.” This summer, they plan to host a series of riffs on the classic fish fry, featuring hopscotch courts, double Dutch ropes and stickball.

The high-low vibe is what attracted Daria Brit-Greene, who hired the fledgling company to cater a dinner at the home of street art collector Natalie Kates for a SCOPE event. The caterers were charged with creating dishes inspired by Ms. Kates’s reserve of urban art as well as her home’s Bowery location. “They’re bringing in the Asian culture of Grand Street with a foie gras dumpling and the Jewish culture of the Lower East Side with a deconstructed Reuben,” Ms. Brit-Greene tells The Observer. The chefs are genuine, she says, and their food is ridiculously good.

They’re also trying to seed a food scene uptown. They’ve led nutritional classes at local grammar schools and hope to soon have cooking programs for single mothers and at-risk youths with the help of C-Cap. “You don’t hear about the Bronx as being an oasis of food,” Mr. Grausman says. “The Bronx is wide open.”

THE CROWD AT THE Le Baron event is a mix of old friends and friends of friends who seem to have discovered Ghetto Gastro’s style for the first time. Partygoers get close and kiss on the dance floor. When the stripper performs an upside-down pole maneuver, a woman with a pixie haircut seizes the opportunity to participate in the act and gets handsy.

Mr. Gray is flanked on both sides by people wanting more.

“Where is your restaurant?” one man asks. “Do you have a card?” A woman demands, “When is your next event?”

“We don’t have a card or a restaurant,” Mr. Gray responds, smiling. He had just ordered a sample pack of 25 cards, but had already given them out. “We try to keep things underground,” he says, “not unnoticed.”

2. Wrap whole beets in foil with olive oil and salt and place in oven until fork-tender, approximately 30 to 35 minutes.

3. Wrap whole shallots and garlic in foil and place in oven until golden, approximately 10 to 12 minutes.

4. While hot, use a hand towel to peel skin off beets, shallots and garlic.

7. Place beets, shallots and garlic in mixing bowl along with rest of ingredients, mix well and let marinate in fridge for at least an hour.

9. Place beet salad in bowl and add small dollop of crème fraiche to top and garnish with micro cilantro. 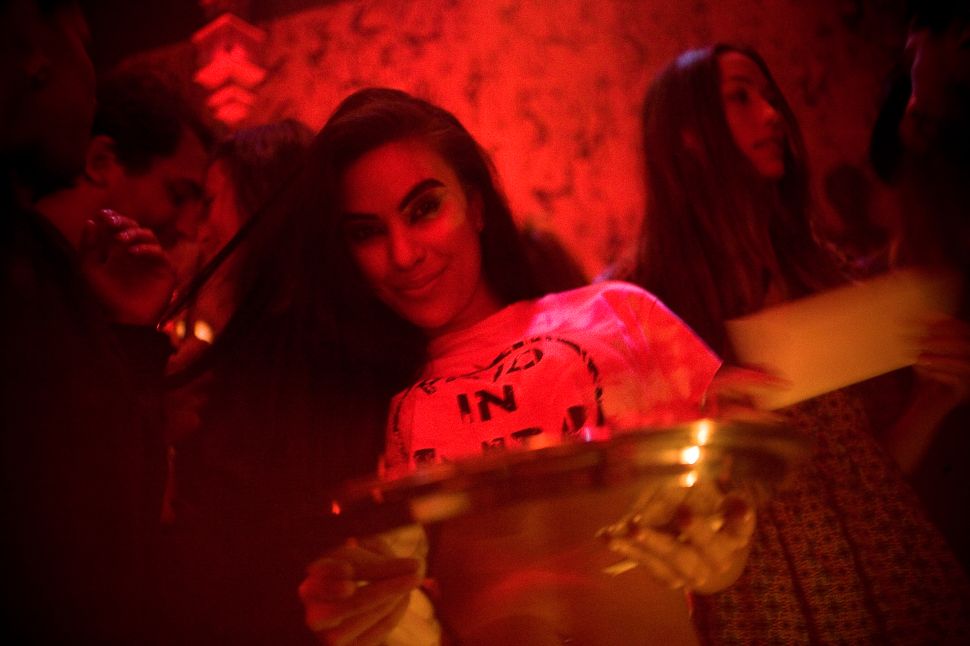