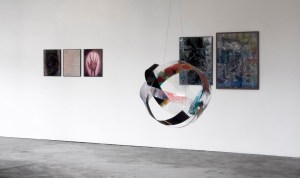 Untitled (portraits from Deviant Art), 2012, is a spring-loaded misdirection. A dark photo print under beveled matting under hand-etched glass, with the rectangle formed by the bevels overlapping a pale gray cameo-style oval, it’s almost impossible to look at. It’s much easier to see your own reflection. So you move back and forth, trying to find an angle from which you can see what is being so elaborately framed, suspecting with some irritation that it may only be your own face—and all the while, the pear-shaped mountain of snakes etched into the surface is clearly framed by all three frames and visible from every angle. What’s more, before being realized, the collage was designed—like all the alluring collages in Mr. van den Dorpel’s first American solo show, some of them built up with layers of resin or extra pieces of glass—using Photoshop. Mr. van den Dorpel is a programmer by training, and the show, which was curated by Karen Archey, includes two computer-assisted video loops, as well as some assemblages. The material realization of a virtual design that draws on diffuse influences and uses found imagery to deflect the viewer’s gaze from its center, it’s the first collage that’s collage all the way down. (Through June 1, 2013)