Jersey City Mayor Jerramiah Healy plans to sue his opponent in the upcoming mayoral race, claiming defamation over a recent campaign ad, according to a statement released today by the Healy campaign.

Healy claims the ad produced by the campaign of downtown Councilman Steve Fulop that shows FBI surveillance footage of Healy meeting with disgraced FBI informant Solomon Dwek is defamatory and a lie.

Asked to comment, a spokesman for Fulop dismissed the threat and reiterated the ad’s central contention.

“This lawsuit threat from Healy is another distraction from the mayor’s failures and more evidence that his campaign is going down for the count,” said spokesman Bruno Tedeschi. “The hidden FBI surveillance video speaks for itself with Mayor Healy making a secret $30,000 deal with a convicted felon and the mayor expressing that he wants a mutually beneficial relationship. The worst part about this is that Mayor Healy let a 78-year-old grandmother, who was acting as his campaign treasurer and deputy mayor, take the fall.”

The ad features FBI surveillance video of the meeting. In the video, Dwek is posing as developer Dave Esenbach, who purported to be interested in building a condo complex in Jersey City. The developer can be heard telling Healy that he hopes his application will not end up at the “bottom of the pile” and tells Healy he gave “Jack” $10,000.

“And I’ll do another 10 now,” Dwek can be heard telling Healy. The voiceover tells viewers they are watching surveillance video of Healy making a “$30,000 secret deal with a developer.”

Healy was never charged with a crime, a fact the campaign says makes the ad defamatory.

Last week, Healy’s attorney issued a cease and desist order, demanding Fulop remove the ad from the airwaves. Fulop continued to run the ad and then doubled down with a second one filmed outside the diner where Healy and Fulop met.

Members of Healy’s administration and inner circle, including Deputy Mayor Leona Beldini, were indicted in the scandal. 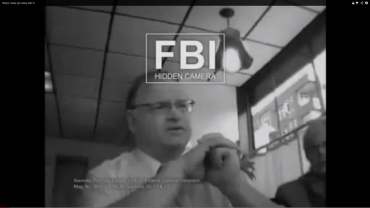