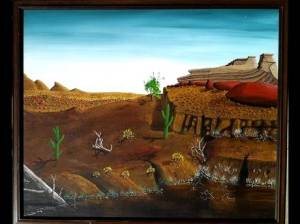 The work in question. (Courtesy The Independent)

You may have heard that the artist Peter Doig is currently involved in a lawsuit with a Canadian parole officer who claims that Mr. Doig sold him a painting in 1975, while incarcerated at the Thunder Bay Correctional Centre as a teenager. The Independent has just posted an image of the work in question.

The officer, Robert Fletcher, says Mr. Doig was 17, and doing time for LSD possession when he encouraged Mr. Doig’s art studies in the facility. Mr. Doig (then, apparently, “Doige,” according to the signature on the canvas) then sold him the above work for $100, according to Mr. Fletcher.

We hadn’t seen the work until just now. Hm. The Independent‘s critic thinks it looks nothing like a Doig. Also let’s not forget that his name is misspelled in the signature.