“The Latino Action Network is proud to endorse Senator Buono to be the next governor of New Jersey,” said Frank Argote-Freyre, president of the organization, standing alongside Al Alvarez, lawyer for the State Democratic Committee and a LAN leader.

“She is the best choice for New Jersey because of her commitment to economic fairness, strengthening the middle class and creating educational opportunities for all,” Argote-Freyre added. “With Barbara Buono as governor, the Latino community will finally have its champion in Trenton.”

LAN evolved out of a 2009 Hispanic versus Hispanic war of wills within the Latino Leadership Alliance of New Jersey (LLA-NJ). A faction of that group wanted Christie for governor. Others wanted to back incumbent Democrat Jon Corzine.

LAN splintered away from the Martin Perez-led LLA-NJ, and Perez later resurfaced as Christie’s appointee to the Rutgers Board of Governors, before staunchly supporting the Republican governor’s 2013 re-election along with LLA-NJ’s PAC.

Christie partisans delight in a tug of war within an ethnic group that leans heavily Democrat in New Jersey, but Buono today made the case for why she would better represent the community.

“The governor has referred to undocumented workers as criminals,” said the Democrat, flanked by LAN leaders as she decried Christie vetoing minimum wage and the earned income tax credit.

The candidate’s late brother in law was Cuban, and there was a connection there. “I may not be a Latina by blood but I am in my heart and soul,” she said.

PolitickerNJ.com asked the candidate about Jersey City Mayor Jerry Healy’s comments to the Star-Ledger regarding his recollection of “three young Hispanic” women tugging a towel off him on his front porch a decade ago. The comment infuriated Latinas running against the Healy ticket, who hauled a podium up to City Hall where they denounced the mayor.

“I am not going to respond to another campaign,” Buono said. “This is a serious endorsement.”

Alvarez slugged it out in a courtroom earlier this year on behalf of the State Democratic Committee, which challenged the petition signatures of Buono’s primary opponents and booted three out of four.

Kevin Roberts, spokesman for the Christie campaign, yawned from afar.

“The Buono campaign has relied on the same, tired endorsements from partisan groups that have opposed bipartisan reforms every step of the way,” Roberts said. “So today is not a surprise; you can set your watch by how her supporters endorse – along party lines. Meanwhile, Governor Christie’s strong leadership and record of getting things done has earned true bipartisan support from individuals and groups across the state and political spectrum, including from the organized labor, Democratic office holders, and groups like the Latino Alliance and National Coalition of Latino Officers.” 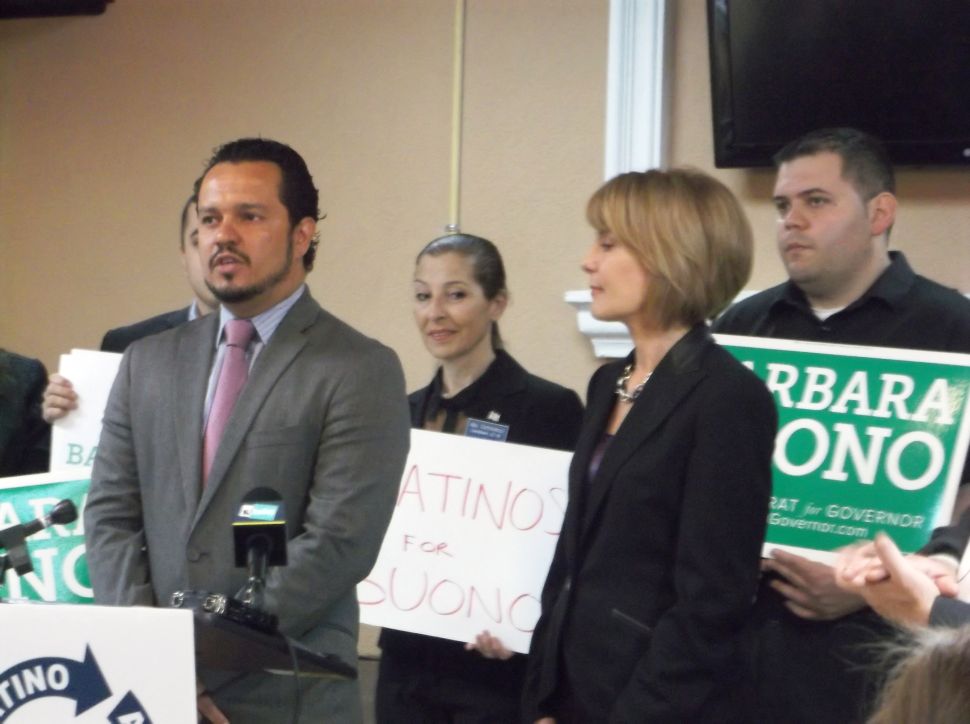