If a typical break-up calls for vats of Ben & Jerry’s and repeated viewings of The Notebook, then we suppose a highly publicized divorce from a top Hollywood actor and devout Scientologist calls for a cross-country move and a gorgeous new apartment. That’s pretty much what Katie Holmes got last summer when she took up residence at the Chelsea Mercantile—the spectacular, star-infused, 21-story building at 252 Seventh Avenue. The actress reportedly signed the lease just a few days after announcing her split from husband Tom Cruise in June 2012.

As you might expect from Ms. Holmes, who has also transmitted her fashion sense to daughter Suri, these are some stylish digs. The actress has been settling into her New York lifestyle pretty well since then. Last winter, Ms. Holmes took the stage as Lorna in Theresa Rebeck’s Dead Accounts, which ran from late November to early January at the Music Box Theatre. Though the show received mixed reviews, Ms. Holmes’s performance stood out, at least to The New York Times. Ms. Holmes “appears much more at ease playing a worn-down country mouse to the hyped-up city mouse of [Norbert Leo Butz],” Ben Brantley wrote. “Ms. Holmes and Mr. Butz summon an appealingly natural family rapport … You may even forget that Ms. Holmes is Katie Holmes for a moment.”

It’s no problem that Dead Accounts closed earlier than expected—Ms. Holmes is already at work acting in another project, a Spike Lee production called Mania Days. In the film, which has been shooting in different locations around New York City, Ms. Holmes plays Carla, a manic-depressive poet who forms a romantic relationship (and later a pregnancy) with a manic-depressive rapper, played by Luke Kirby. Katie and Suri strolling and riding.

If you’re looking to spot Ms. Holmes on the streets of New York City, it’s unlikely—the star leads a private life (or as private as possible when you are being stalked by paparazzi). The most reliable place to spot the celeb is the H. Stern store on Fifth Avenue, where larger-than-life, nearly nude billboards of the gorgeous Ms. Holmes grace the windows on either side of the doors. Since moving to New York, Ms. Holmes has also been made the face of Bobbi Brown; she’s the company’s first-ever celebrity spokesmodel.

When Ms. Holmes isn’t performing onstage or posing on-camera, she’s playing the role of mother to daughter Suri. Ms. Holmes reportedly enrolled the stylish seven-year-old in the prestigious Avenues school, located near their home in Chelsea.  The school is very new, and has an educational philosophy that might appeal to jetsetters able to pay its slightly higher-than-usual tuition costs.

“In addition to teaching traditional subjects,” Avenues CEO and co-founder Chris Whittle has said, “the school takes seriously its mission to prepare students for the world through intensive classes in Spanish or Mandarin and by providing them with a global view of geography, history, religion, demographics and economic development across many cultures and countries.”

We always knew that Suri could out-dress us any day, but from the looks of her new school, we’re pretty sure she’ll soon be able to outsmart us, too.

But Back to Those Digs

The Chelsea Mercantile was originally built as a fabric manufactory in 1908 (that’s exactly 90 years before the premiere of Dawson’s Creek, the show that marks Ms. Holmes’ debut, in case you slept through that pop culture moment). Nowadays—with the influx of trendy galleries, restaurants and shopping spots in the neighborhood—the historic textile building has been transformed into more than 350 luxury condos that house the likes of Marc Jacobs, Jane Fonda and Lance Bass, along with Katie and Suri. It boasts an interior garden, full gym, parking garage, and a 10,000-square-foot roof deck, and yet still retains charming elements of its turn-of-the-century origins.

“The Chelsea Mercantile is really cool,” says Corinne Pulitzer, executive vice president of Douglas Elliman Real Estate, which has sold a number of units at the Chelsea Mercantile in recent years. “The building has the infrastructure of a factory building, with the very high nine-foot ceilings. Some of the apartments have exposed brick walls.” Entrance to the Chelsea Mercantile, home of Holmes.

more convenient location. She’s not a kid anymore, after all. “The apartments have a loft feel, but you don’t have to go down to Soho or Tribeca, which I think is a big pull for people,” Ms. Pulitzer says. “It’s great to live down there, [but] it’s a hard lifestyle selection if someone’s in the theater, or [working] in midtown.”

The Chelsea Mercantile is also perfect for anyone with a seven-year-old daughter. “The building has a children’s playroom,” says Ms. Pulitzer. “I can see how [Ms. Holmes] came to choose it.”

The diversity of the Chelsea neighborhood may also be responsible for attracting celebrities like Ms. Holmes. From the threshold of the Chelsea Mercantile, residents can reach avant-garde art galleries, elite eateries and fine retail all on foot (or by chauffeur, of course). “The neighborhood has such diverse attractions that it gets a really good mix of different types of people who are seeking [something] cool and edgy,” Ms. Pulitzer says, “as opposed to the Upper East Side, which I wouldn’t call cool or edgy.”

The Star Grocery Shops, Too

On the ground floor of Ms. Holmes’s apartment building is a cozy Whole Foods Market, where the actress is known to regularly shop. The Daily News photographed her there last summer, trying on  cowboy hats with daughter Suri as the pair shopped for a Fourth of July meal.

Though she had been spotted inside the organic food mecca, reporters last summer—who crowded Ms. Holmes’s building shortly after she moved in—were wondering why they rarely spotted their target entering Whole Foods. Hillary Reinsberg, a staff member at BuzzFeed, explained the popular theory that gradually circulated among the crowd of Holmes seekers: “Nearly every lingering photographer seemed to have figured out that Holmes has a way of getting into the store from inside her swanky apartment building,” Ms. Reinsberg wrote in a July 2012 article.

We needed to know: Is it a secret revolving bookshelf, activated by touching a certain tome? Does she enter through a nondescript girls’ bathroom, á la Harry Potter and the Chamber of Secrets? Can Katie Holmes teleport?

We ask a Whole Foods employee if Ms. Holmes really has a private entrance to the grocery store. He laughs—he has heard the rumor before. But, he says, there’s definitely no secret entrance for the rich and famous. “There’s no Batcave in here, there’s only one door.” Like almost everyone else we spoke to for this story, except the vocal Ms. Pulitzer, the real estate agent, this employee declines to be named, citing company policy.

While Ms. Holmes shops at Whole Foods, her “team” reportedly favors the more casual deli across the street. According to Amen, who does give his first name, and works behind the counter at Chelsea Gourmet Deli, “She sends her bodyguard in every morning—it’s one major guy who comes in.” He notes that the bodyguard frequently buys sandwiches, drinks and snacks.

And when it comes to eating out, Ms. Holmes has no shortage of choices in Chelsea. “The restaurants—my God, you never have to cook!” Ms. Pulitzer gushes.

Back in Beverly Hills, Ms. Holmes was known to be a fan of Crumbs Bakery. Luckily for Ms. Holmes, she can feed her sweet tooth on the East Coast, too; there’s a Crumbs a block away from her Chelsea apartment.  And indeed she has visited the cupcake shop. “It wasn’t a big interaction, but she was very nice,” says the manager of Crumbs when asked about Ms. Holmes’s visit to the bakery. She admits feeling a little star-struck: “I pretended like it wasn’t Katie Holmes!”

Nearby is also the trendy Meatpacking District, whose cobblestone streets are clustered with the hottest bars and restaurants in the city. “I’m sure [Ms. Holmes] hangs out there a lot,” Ms. Pulitzer says. “You have the Ganesvoort, all of these fabulous hotels and clubs. The Standard is there too, and they have that beer garden in the summer. It’s a really high-energy neighborhood.”

Of course, for a celebrity with a physique like Ms. Holmes’ and modeling and film contracts, along with great cupcakes come great demands for cardio. Though Ms. Holmes ventures outside of Chelsea to attend spin classes at SoulCycle, the actress is also known to frequent the Chelsea Piers, an expansive, multi-purpose athletic complex along the Hudson River, just blocks from her apartment, although this might be more for Suri’s benefit than her mother’s. Last summer, photographers spotted Ms. Holmes taking Suri to a Chelsea Piers gymnastics class.

If Suri tires of gymnastics, there’s always ice skating to try (and adorable skating dresses to wear while doing it), golf, bowling, boating and facilities for just about any kind of kid party.

“She goes bowling,” the employee says. “What’s interesting is they offer the private room—they have a private room with eight lanes—but they don’t want it. They want to be in Crumbs, a favorite of Katie’s and Suri’s.

Ms. Holmes is known to be a long-time fan of Anthropologie; lucky for her, the store has a retail space in Chelsea Market, an easy walk from Ms. Holmes’s apartment.

We swing by Anthropologie’s Chelsea location in the hopes of spotting the actress—or at least finding out if she’s a frequent visitor. A friendly employee confirms our suspicions, noting that Ms. Holmes often comes into the store to grab a few things. “She’s a loyal customer,” the sales representative says. “She’s an Anthro girl!”

One Columbia grad student and frequent Anthropologie shopper describes the time she and her roommate spotted Ms. Holmes at the Chelsea Market store: “I was admiring bowls and glasses and first saw her from the periphery,” the source says. “I walked over to my roommate and asked her to look for me again to confirm. Katie Holmes said, ‘Let’s go, sweetie’—she was with Suri, and they were looking at plates. I also checked out next to them and she asked about different colors for table settings.”

The student also reports that on that day in November, Ms. Holmes’s overall style was pretty casual. “From what I remember, [she wore] a long gray cardigan, jeans and short boots,” she says.

Ms. Holmes has also been seen checking out other spots in the famed indoor market, which houses popular joints like Morimoto, Friedman’s Lunch and Sarabeth’s Kitchen.

Walk a little farther south to the Meatpacking District and you’ll hit even more high-end clothing shopping destinations: Diane von Furstenberg, Tory Burch, Alexander McQueen and Stella McCartney all have shops there. And the shopping options are only continuing to grow: “On the corner of 14th Street toward the West Side Highway, one of my favorite gas stations is now going to be 20,000 square feet of retail right by the Highline,” Ms. Pulitzer says. It’s a market that’s certainly perfect for a fashionista like Ms. Holmes—or even a budding fashionista or a budding one. 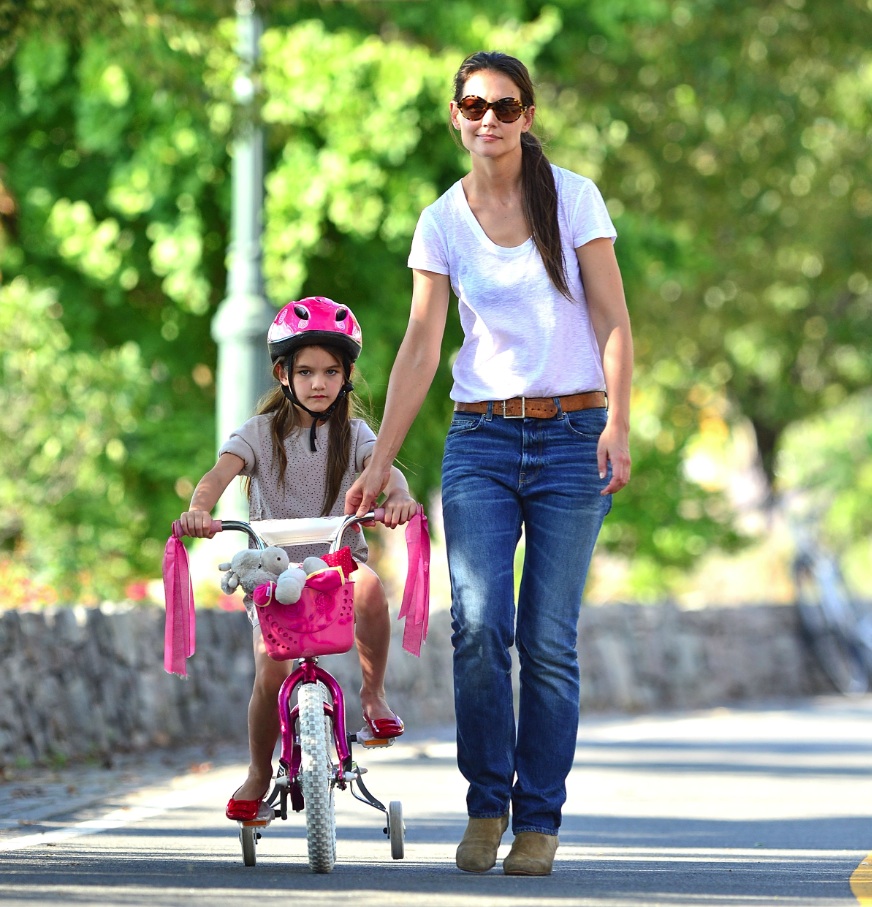